The US military has devoted a considerable amount of attention to climate change, which makes sense given the various risks it poses to military operations. These risks include potential increased demand for humanitarian responses to climatic disasters and the threat of climatic changes, such as stronger tropical storms and sea level rise, to existing military installations. For instance, Hurricane Ivan knocked one of the Navy’s key bases, Naval Air Station Pensacola, out of commission for a year.

Climate change’s most severe potential military threat – increasing the risk of violent conflicts – is also its least likely, by far. Yet, unsurprisingly, this has gotten the lion’s share of attention from the media.

Last week, Eric Holthaus at Slate published an interview with retired Navy Rear Admiral David Titley. The piece is worth a read. I would say the Rear Admiral’s comments accurately reflect the views of many military officials who are concerned about climate change.

Let me just preface this by noting that Rear Admiral Titley has forgotten a hell of a lot more about military strategy, history, and operations than I will ever learn. But I do take exception with the way that he framed the issue:

Let me give you a few examples of how that might play out. You could imagine a scenario in which both Russia and China have prolonged droughts. China decides to exert rights on foreign contracts and gets assertive in Africa. If you start getting instability in large powers with nuclear weapons, that’s not a good day.

Here’s another one: We basically do nothing on emissions. Sea level keeps rising, three to six feet by the end of the century. Then, you get a series of super-typhoons into Shanghai and millions of people die. Does the population there lose faith in Chinese government? Does China start to fissure? I’d prefer to deal with a rising, dominant China any day.

If you take Rear Admiral Titley’s comments at face value, you’d be forgiven if you came away believing that climate-related disasters may inevitably spawn violent conflict. This is an all-too-common perception, one to which I used to subscribe.

What can we say about disasters and conflict?

But the fact remains that nothing about disasters inherently leads to conflict. Quite the opposite, really. There have been a few studies that find such a connection, including a one in 2008 from Philip Nel and Marjolein Righarts (PDF), who examined the connections between various forms of disasters and the risk of civil conflict onset. They found that disasters increase the likelihood that civil conflict will occur. Such disasters may create incentives for rebel groups to attack state institutions, or they can generate new grievances from heightened resource scarcity.

But an array of studies dispute these findings. Back in the 1960s, sociologist Charles Fritz suggested that disasters often alter social relations and help to mitigate pre-existing cleavages within communities. If securitization requires the existence of an “other” against which people can organize, the disaster itself may take that role, leading to the development of a  “common community of sufferers,” that promotes social cohesion and cooperation.

Ilan Kelman has further suggested that this ameliorative effect can take place at both intra and interstate levels, leading to “disaster diplomacy.” He has cataloged dozens of examples of disaster diplomacy, ranging from earthquakes in Greece and Turkey (PDF) to the aftermath of the 2004 Indian Ocean tsunami (paywall) in Aceh. Overall, the preponderance of evidence suggests that disasters do not inherently precipitate violence.

So can disasters lead to conflict?

Disasters, on their own, are highly unlikely to cause conflict. But the politics of the disaster response, or the lack thereof, is a different story. Think of Hurricane Katrina; it wasn’t the storm itself that caused so much outrage and discord, but the massive failure of the Bush administration to respond adequately to the needs of survivors.

Weak governments that are poorly equipped and lack sufficient international support are unlikely to respond effectively to disasters. This outcome could potentially anger survivors and provide them with incentives to take up arms, perhaps in an attempt to seize additional resources. But the real problem emerges when governments intentionally divert relief aid for their own gain or to serve their own political ends.

On December 23, 1972, a devastating earthquake rattled Managua, the capital of Nicaragua. The quake destroyed three-quarters of the city’s housing stock and killed at least 11,000 Nicaraguans as they slept. Strongman Anastasio Somoza immediately began to abuse his power to take advantage of the catastrophe. According to a 2010 Miami Herald article,

Somoza began directing reconstruction efforts from a family estate on the outskirts of Managua. Cabinet ministers, businessmen, foreign officials and international relief bosses — many of them addressing Somoza as “Mr. President” — trooped in and out all day long. It was Somoza with whom foreign diplomats negotiated aid packages; it was Somoza who decided Managua would be rebuilt.

While later independent investigations cast some doubt upon the scale and significance of the profiteering, it left an indelible mark upon Nicaraguans. As evidence of the corruption mounted, event the conservative Catholic Church turned on the regime. These events contributed to a resurgence of the Sandanista movement, which formally took up arms three years later. 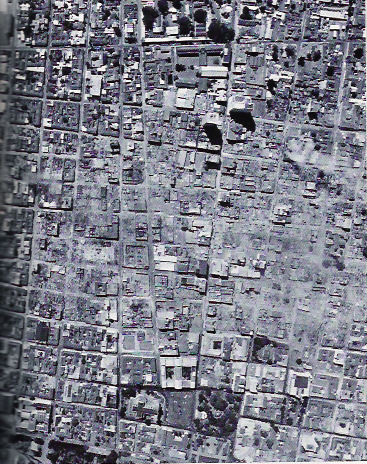 An aerial image of the damage to Managua following the devastating 1972 earthquake (courtesy of the US Geological Survey).

Evidence suggests that inadequate and/or politically motivated disaster responses may have fed into subsequent conflict in Bangladesh (following the 1970 Bhola cyclone), Guatemala (after the 1976 Guatemala earthquake), and Sri Lanka (after the Indian Ocean tsunami).

When conflict occurs in the wake of disasters, it is not always an unintended and unforeseen consequence. In fact, according to Travis Nelson, it can actually be a survival tactic (paywall) employed by weak states. Nelson suggested that weak leaders may be more likely to launch small, diversionary conflicts in order to distract from inadequate disaster responses and generate nationalistic solidarity.

In July 1959, severe flooding occurred along the Yellow River, killing approximately two million Chinese. The disaster occurred at a time when the Maoist regime was weak and dealing with several crises, including the catastrophic Great Leap Forward. In the midst of these crises, the regime was unprepared for the floods, and Chinese elites began openly to question Mao’s rule. In response, the regime launched a series of border skirmishes with India, which eventually fed into the 1962 Sino-Indian War. The war aroused nationalist fervor and distracted from other challenges.

But do disasters really cause conflict?

In a word, maybe. But now we’re wading into a difficult and highly complex area that deals with endogeneity. In statistical modeling, a variable is said to be endogenous when it can be affected by other variables within the model. In other words, we cannot truly isolate the variable from the effects of others, making it difficult to determine whether or not its effects are mitigated by other factors.

As I’ve written before and will continue to say until I’m blue in the face, there’s no such thing as a natural disaster. Disaster events are inherently shaped and controlled by the extant political, economic, and social environments. As a result, disasters do not occur in a vacuum, and we can’t treat them as such. So even if it seems likely that a disaster helped cause a conflict, it would be difficult to say that it was an exogenous effect, as its effects would likely be influenced by existing political and social dynamics.

While it’s true that the 1972 Guatemala earthquake helped reignite civil war (paywall), as it seems to be, it’s also true that the vulnerability of Mayan peasants to the earthquake’s effects was dictated by structural inequalities and existing violent conflict. So can we really say that the quake caused the subsequent return to war? Yes. No. Maybe. Honestly, it depends on how you define “cause.”

Did climate change cause Syria’s civil war then?

Keith Kloor hammered this point home in his recent post on the question of whether Syria’s drought caused its brutal civil war. Kloor takes Tom Friedman to task for suggesting that the Assad regime’s response to the drought helped fuel the war but failing to acknowledge that the regime’s actions also helped facilitate the drought. He quotes, at length, from an article last year where authors Jeannie Sowers and John Waterbury argue,

When terms such as ‘stressor’ or ‘threat multiplier’ are applied to drought, shifting rainfall patterns, floods, and other environmental events in the Middle East, they often obscure rather than illuminate the causes of uprisings and political change. There is perhaps no better illustration of this dynamic than Syria, where a closer examination shows that government policy helped construct vulnerability to the effects of the drought during the 2000s. State policies regarding economic development, political control in rural areas, and water management determined how drought impacted the population and how the population, in turn, responded.

So will climate change really be different then?

Probably. In a 1987 article, Beverley Cuthbertson and Joanne Nigg consider under what circumstances a disaster may produce discord among survivors (paywall), which they term a “nontherapeutic community.” They find that, unlike with geological and weather disasters, victims do not see manmade disasters, like chemical spills, as natural. Accordingly, survivors often disagree as to whether a disaster has actually occurred and who is accountable. These disagreements can lead to the emergence of “victim clusters,” elevating tensions. In extreme circumstances, this could potentially lead to violence.

Given the fact that climate change is unequivocally manmade and that it has increasingly been linked to disasters, like droughts and heatwaves, it’s possible that climate-related disasters could be different. Disaster survivors could point to climate change’s fingerprints in the events that damage their livelihoods and use it as a call to take up arms. It seems unlikely, but it’s hard to be sure. Clearly, manmade climate change is different than anything we have dealt with in the past, and it is likely to change our calculus on these issues.

We may be able to say, to this point, that disasters probably don’t directly cause conflict, but as my grad school professor Ken Conca always says, you should be careful about driving forward by looking through the rear view mirror.