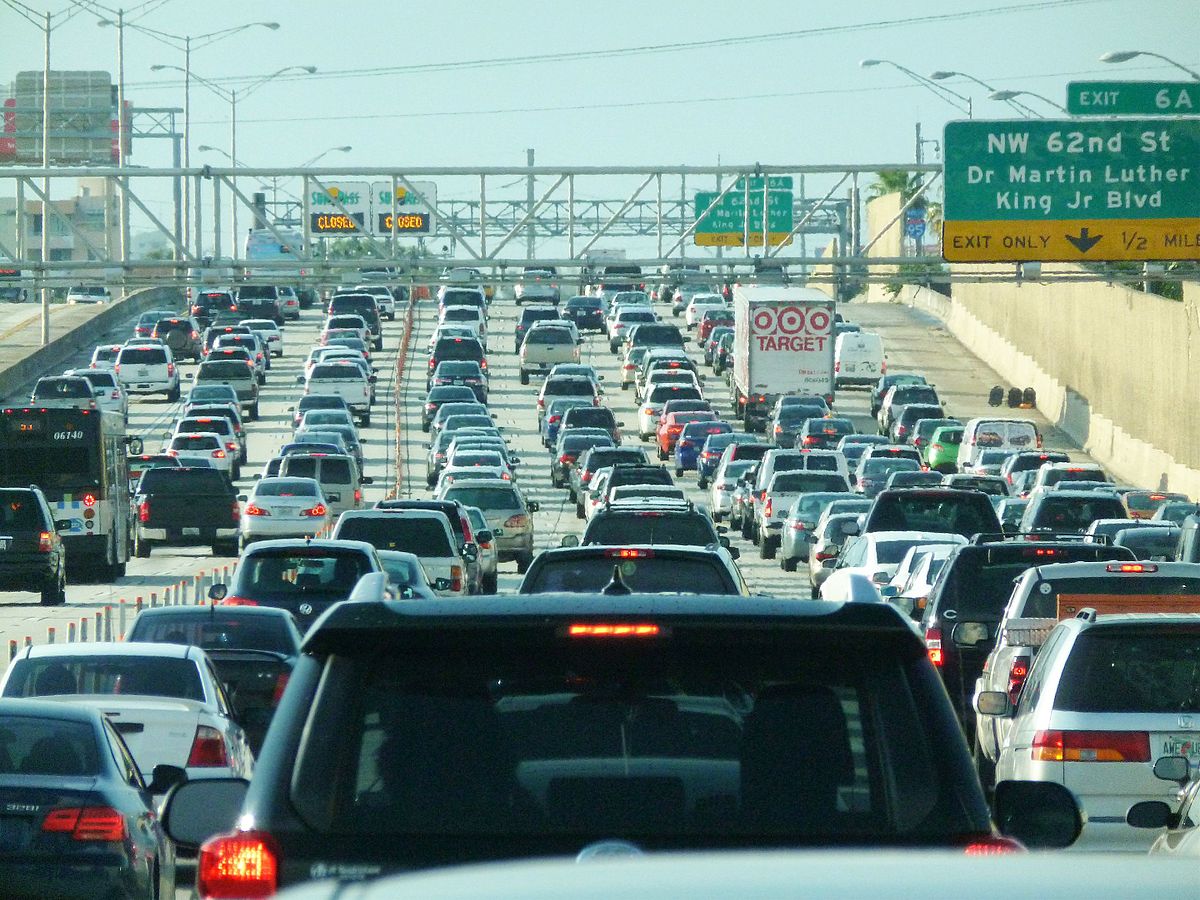 Rush hour traffic along I-95 in Miami (courtesy of Wikimedia Commons).

While the plan never actually went into effect – the Supreme Court stayed its implementation in February 2016 – the CPP proved extremely contentions in many circles.

Critics from the left noted that the CPP did little more than affirm current trends in the electric sector, which secured half of the reduction targets by the end of 2015. Opponents from the right, naturally, parodied it as a frontal assault on freedom itself. EPA Administrator Scott Pruitt claimed that the plan was “about picking winners and losers,” which is standard Republican fare for every single regulation of energy markets.

Transportation is the climate culprit nowadays

But while everyone’s attention was turned to the EPA’s half-brained plan to repeal the CPP, it’s become increasingly clear that transportation has emerged as the real carbon bogeyman. Last year, the Energy Information Agency (EIA) announced that transportation generated more GHGs than electricity generation for the first time since 1979. This trend has continued apace since that point, as economic growth, falling gas prices, and a consumer shift towards ever-larger vehicles has driven a spike in driving among Americans. 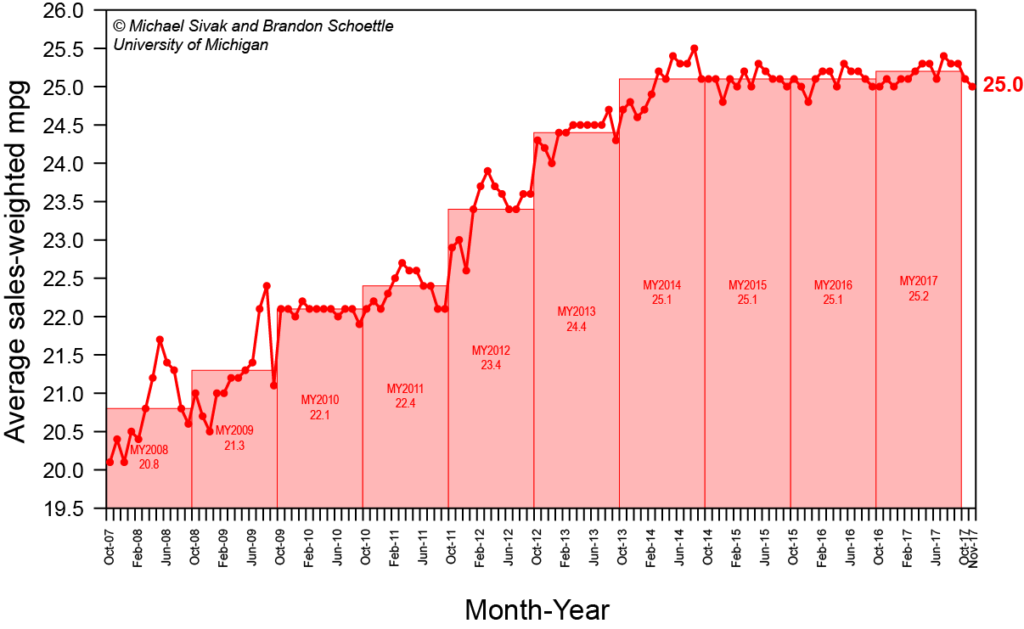 The fuel economy of the US vehicle fleet has flatlined since 2014 (courtesy of Michael Sivak and Brandon Schoettle).

As a result, the rise in vehicle miles traveled (VMT) has more than offset improvements in fuel economy, transportation sector GHG emissions have increased, and this emissions trajectory does not seem likely to change soon. California, which has emerged as the tip of the spear on state-level climate action under Jerry Brown, provides an illustrative case. While statewide GHG emissions fell by an impressive 16 MMTCO2e in 2016, emissions from transportation actually increased slightly last year.

Though governments at various levels have pushed a number of policies to reduce transportation GHGs, progress in this area clearly has not kept up with other sectors. The Obama administration’s biggest achievements on transportation emissions – stricter fuel economy standards for passenger vehicles and heavy-duty trucks – are both under attack, as Scott Pruitt continues his coordinated campaign to make as much of a dystopian hellscape as possible. Had the EPA actually implemented these standards, they would have prevented the release of an estimated 6 billion and 1.1 billion MMTCO2e, respectively.

Given the scale of the problem at hand, we cannot afford to just ignore GHG emissions from the existing vehicle fleet. Since 1995, the average age of the vehicle fleet in the US has increased 38.1%, from 8.4 years to 11.6 in 2016. That suggests that, even if the fuel economy standards survive this administration, they aren’t enough. So how can we proactively work to cut emissions from vehicles currently on the road?

In a recent working paper, Allen Greenberg of the Federal Highway Administration and John Evans from Cambridge Systematics tackled this question.

The authors discuss a CPP-style federal policy for reducing transportation GHGs – that is, establishing reduction targets for each state and laying out proposed policy interventions. Much like the EPA outlined acceptable emissions reduction measures for states under the CPP, like carbon trading and renewable energy standards, Greenberg and Evans lay out a model policy bundle centered on three ideas:

As the authors do, I will briefly take each of these proposals in turn.

Currently, most insurance companies rate car insurance based upon factors including gender, age, and driving record, to develop a fixed fee. This approach does nothing to address the reality that one’s risk of getting into a crash and making an insurance claim is related to how much one drives.

Converting to VMT-based, variable insurance would better reflect risks and create an incentive for people to drive less. According to a 2008 study from Brookings, implementing a fully variable PAYDAYS insurance pricing scheme could create $50-60 billion in net benefits nationwide due to reduced externalities from driving. For their model policy, Greenberg and Evans call for insurance premiums that are 30% fixed/70% usage-based by 2030.

People who know me probably know that I’m borderline obsessed with parking cash out programs. This idea, which has been in place in California for 20 years, enables commuters who do not drive alone and park at work to get a cash incentive equal to the value of that free parking fringe benefit. According to parking research guru Donald Shoup, parking cash out programs can cut drive alone trips and VMT by 11% and 12%, respectively. It is perhaps the single most effective policy that an employer can implement to lower driving and parking demand.

In their proposal, Greenberg and Evans call for “prohibit[ing] employers from discriminating against non-drivers in the commuter benefits they offer” by providing an equivalent subsidy to commuters of all stripes if they provide free parking. The authors assume that this cash-out proposal will have a value of $121 per month, or $1,452 per employee, per year.

Currently, consumers must pay a sales tax on the entire value of a vehicle at the point of sale. This both dissuades people from buying new vehicles and does nothing to disincentivize driving. Applying this sales tax on a per-mile basis, spread across three years, would help to address both of these issues.

According to the available research, each 1% increase in the fixed sales tax on new cars reduces sales by 1%. Thus, by shifting to a mileage-base tax, as the authors suggest, consumers would be more likely to trade in their older vehicles for newer, more fuel efficient vehicles, which they would subsequently drive less.

To estimate the potential impacts of this transportation policy bundle on VMT and GHG emissions, Greenberg and Evans ran a series of models based around a range of price elasticities. Elasticity is a fundamental economic concept, which quantifies the extent to which consumers adjust their demand of a product based upon price fluctuations. While most products are price elastic – i.e. you buy less of them when the price goes up – others, such as cigarettes, are inelastic.

If the federal government mandated that all states implement this idealized transportation policy bundle by 2030, the results would be stark. In their central scenario, Greenberg and Evans, find

[T]hat enacting a regulatory scheme to achieve the policy-based transportation efficiency targets discussed in this paper would yield nationwide carbon emissions reductions of 68.6% of those of the Clean Power Plan (on top of the reductions of that rule) or 256 MMT versus 375 MMT reduction in CO2e. The transportation efficiency measures would bring about GHG reductions greater than those calculated for the Clean Power Plan in 24 states plus the District of Columbia.

In Ohio, this transportation policy bundle would cut GHGs by 9 MMTCO2e, or roughly 36% of the state’s emissions target under the CPP. The range for all states was a low of 0.5 MMTCO2e (Alaska, North Dakota, and Wyoming) to a high of 33.8 MMTCO2e in California.

Is it possible for odds to be negative?

Granted, in the current political climate, the prospects of getting Donald Trump and Scott Pruitt to propose, sign off on, and implement this strategy are maybe not awesome, given that the EPA’s Science Advisory Board is chaired by someone who thinks air pollution is good for kids.

But, in the absence of federal action, states and cities have stepped to the fore on climate policy. A coalition of progressive policymakers and advocates recently attended COP 23 in Bonn to declare their continuing commitment to the Paris Agreement.

Given these trends, Greenberg and Evans considered the emissions benefits if a coalition of like-minded states implemented these policies on their own. First, they found that if each of the 19 states (plus the District of Columbia) that voted for Hillary Clinton in 2016 signed up for these three ideas, it would cut GHG emissions by 103 MMTCO2e (40% of total potential savings).

Next, they estimated that if California, the nine East Coast states in the Regional Greenhouse Gas Initiative (RGGI), and the eight other states that signed up to defend the CPP in federal court all took action, they could achieve 35% of the emissions savings from the CPP.

In many circles on both sides of the aisle, pricing carbon is the sine qua non of climate policy. Progressive climate activists like Bill McKibben criticized Hillary Clinton for not pushing one during the campaign, while a cadre of conservative elders have called for replacing EPA climate regulations with a cap and dividend policy.

Greenberg and Evans explicitly took on this sacred cow.  They examined the emissions benefit of placing a $50 per ton carbon price on transportation emissions; this tax is well above both the Obama era social cost of carbon ($36 per ton) and the Climate Leadership Council’s proposed carbon tax ($40 per ton).

As this paper makes clear, policymakers at all levels of government (and in the private sector, for that matter) can put a real dent into transportation-related GHGs by implementing smart transportation demand management (TDM) policies.

But beyond just tackling, you know, an existential planetary crisis, these types of TDM policies create co-benefits. Internalizing the real costs of driving and reducing VMT will reduce traffic crashes, potentially averting thousands of injuries and premature deaths, cut car insurance premiums, improve air quality, lessen the strain on infrastructure, increase sales of more fuel efficient/alternative fuel cars for automakers, curb economic inequality, and begin to shift us away from the myriad costs of our SOV-centric transportation system.

Of course, because there’s basically nothing but upside to this idea, it will never see the light of day.

3 thoughts on “The Clean Power Plan is on life support, but forget it, let’s create one for transportation”