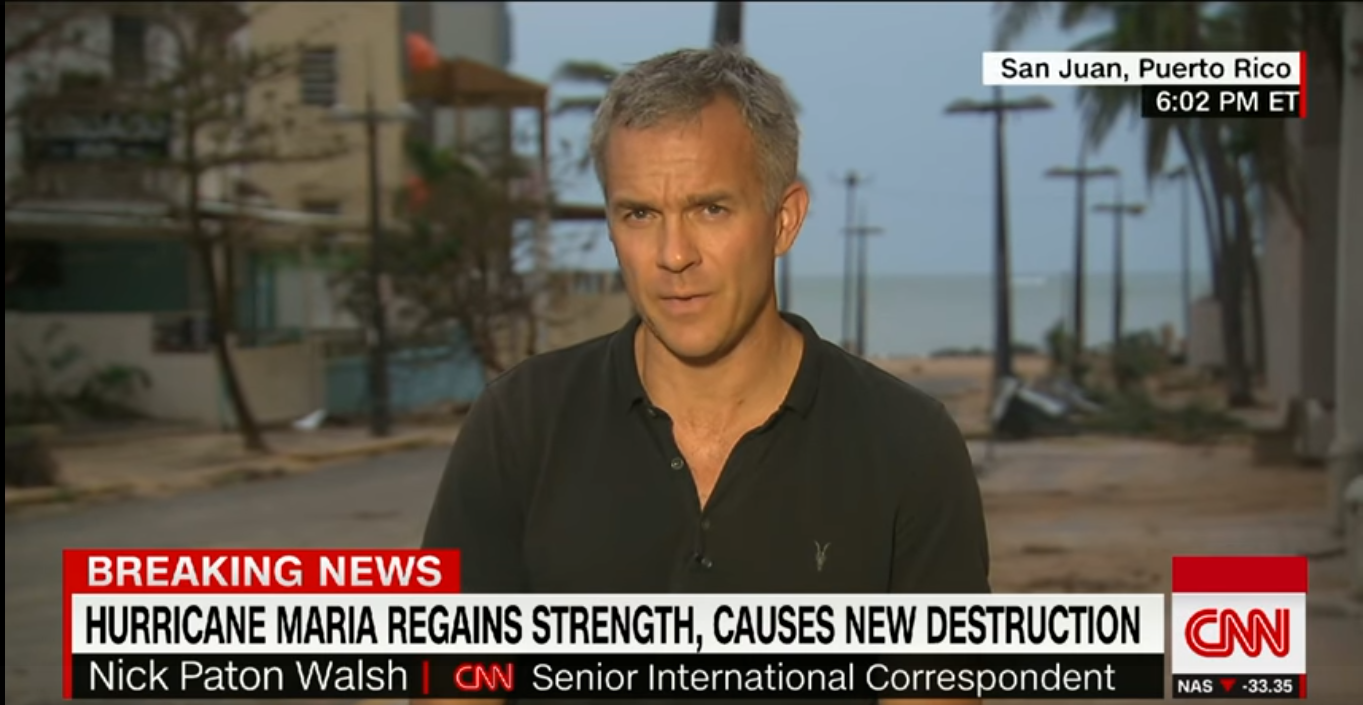 The media plays a significant, though often controversial, role in the wake of disasters.

Major media coverage can elevate the profile of a particular disaster, bringing the struggles survivors face to the televisions, computers, and smartphones of people across the country.

Moreover, the way that the media frames a disaster and the experiences of those affected can alter how the public perceives events on the ground. This reality was particularly stark after Hurricane Katrina devastated New Orleans and the Gulf Coast in 2005. Race directly affected the way that journalists described events, with reporters playing up concerns about violence and looting among the predominantly black survivors trapped in the Superdome and the New Orleans Convention Center.

Most infamously, two otherwise similar wire photos – one from the Associated Press showing a black man carrying groceries through flood waters, and another from Agence France Presse featuring a white man and light skinned woman in the same circumstance – carried very different captions. While the AP photo stated the young black man was “looting a grocery store,” AFP reported the couple were making their way back after “finding bread and soda.”

Though more than a decade has passed since Katrina struck, relatively few journalists fully grasp the central role that they play in the disaster response and recovery processes. Reporters are not merely external observers relaying images and information from inside the disaster zone. Rather, they are are a constituent part of the broader disaster management structure; their actions can directly affect the quantity and quality of the response and recovery.

This shortcoming has been particularly clear in Puerto Rico. As FiveThirtyEight’s Dhrumil Meta illustrated in an important post last week, the American media largely failed to cover the unfolding crisis after Hurricane Maria struck the island on September 20.

Now, there are a number of reasons why journalists may have paid less attention to Maria than they did to Hurricanes Harvey and Irma when they struck Texas and Florida, respectively.

Clearly, from a logistical perspective, it is easier for reporters to access affected areas in Texas and Florida than in Puerto; this was particularly true given the disruptions Maria caused to flights into San Juan. The storm also devastated the island’s infrastructure, blocking roads and knocking out virtually the entire electric grid, further complicating efforts to get reporters on site.

And, in theory, the lack of media coverage should not measurably affect the government response. Despite what the FEMA Administrator might say, the US is the richest country in the history of the world, one that has sent men to the moon on six occasions and which simultaneously coordinated a war across the Pacific Ocean while planning and executing the largest amphibious invasion in world history.

But, as I noted earlier, media coverage is not disconnected from the disaster response. David Strömberg, an economist at Stockholm University, has proven that media coverage plays a major role in determining where disaster relief goes.

I discussed his research in a 2015 post for Vox:

What’s most striking is that this coverage appears to influence where disaster relief goes. The authors looked at USAID’s Office of Foreign Disaster Assistance (OFDA) and found that it responded to only 19 percent of the disasters in their study sample. So how did the office choose?

Strömberg and Eisensee found that nightly news coverage of a disaster increased the odds that OFDA would provide disaster relief by 16 percent. The effect was even greater for disasters that under normal circumstances would have only a marginal chance of getting covered — coverage increased the probability of aid by 68 percent. By contrast, if a disaster was going on during Olympics coverage, the likelihood that OFDA would provide relief went down by 6 percent. (A busy news day reduced the odds by 3 percent.)

As the reality of the crisis in Puerto Rico began trickling out in the days after Maria made landfall, media attention was focused squarely on other stories. President Trump continued his war of words with North Korea, both on and offline. Then, on Saturday, September 23, the President decided to start a Twitter war with both the NFL and the NBA.

This story sucked up much of the media attention over the weekend. According to the Vanderbilt Television News Archive, a database of nightly TV news coverage that Strömberg and Eisensee used for their research, TV news outlets ran nine stories spanning 71:30 on Trump’s attack on the athletes’ protests of police brutality and structural racism; Puerto Rico, in turn, received far less attention – six stories lasting 21:21.

Just as Donald Trump is a major driver of cable news coverage, so too is a he ferocious consumer of cable news, particularly Fox. As we’ve seen repeatedly, one of the best predictors of what Trump will tweet about next is whatever the last story was on Fox and Friends.

Trump’s bizarre dependence on cable news coverage played a major role in the government’s delayed, inadequate response to the crisis in Puerto Rico.

As the category 4 hurricane was bisecting Puerto Rico, Trump flew to his private golf course in New Jersey, then headed to Alabama for a campaign rally full of unhinged rants and diatribes. The President reportedly held no conversations with officials about Puerto Rico over his four-day weekend, despite the fact that the acting Secretary of Homeland Security, Elaine Duke, was with him at Bedminster.

It was only after reporters began sending reports back from Puerto Rico – many of which were critical of Trump’s apparent indifference towards the plight of an island of brown, Spanish-speaking citizens – that the President finally showed any sign of engagement on the issue. (Of course, his series of tweets beginning September 25 hardly helped the situation.)

In order to examine the level of TV news coverage of Hurricane Maria, as compared to Hurricanes Harvey and Irma, I did a search of the TV News Archive from three days before to three days after each hurricane made landfall in the US.

This one-week period is particularly critical. Whether or not officials make preparations in the days before the storm affects the speed and quality of the response, and the 72 hours after landfall are clearly life and death. 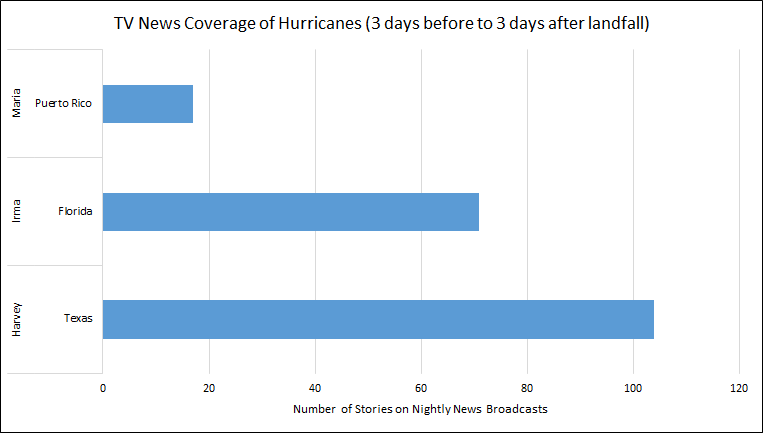 Number of TV news stories covering Hurricanes Harvey, Irma, and Maria from 3 days before to 3 days after they each made landfall (data from Vanderbilt TV News Archive).

From September 17-23, “Puerto Rico” returned just 17 stories lasting just 41 minutes and 31 seconds. In other words, a more severe disaster received just 6.2% and 12.8% as much coverage as those in Texas and Florida, respectively. 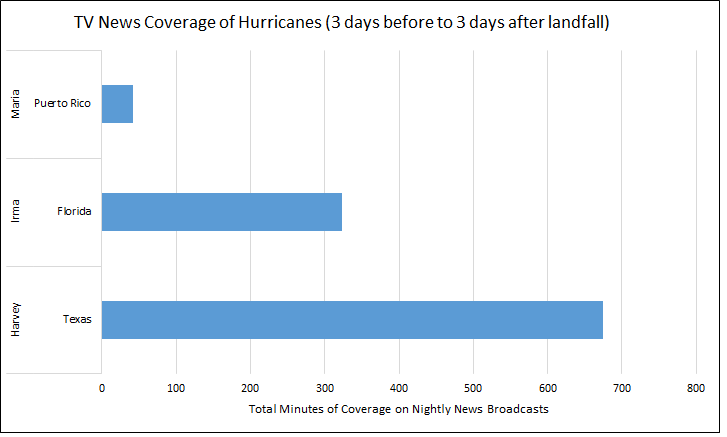 Amount of time TV networks spent covering Hurricanes Harvey, Irma, and Maria from 3 days before to 3 days after they each made landfall (data from Vanderbilt TV News Archive).

While the President has claimed – despicably – that Puerto Ricans have not done enough to warrant his concern or support, the fact is that they have no choice.

As disaster expert Samantha Montano has noted, Hurricane Maria was not just as disaster, it was a catastrophe:

[Catastrophes] cover a widespread area, needs overwhelm not just the impacted community but also the communities around them, many people and organizations without training become involved and militaries or international groups deploy, and coordination is extremely difficult if not impossible. Often leadership must come from outside the affected community.

Accordingly, the fact that Trump, a cable news viewer who happens to have the nuclear codes, did not see coverage of the situation in Puerto Rico directly affected the speed and scale of the response effort. This lack of coverage was due, in part, to the difficulties of covering the event, and, in part, due to Trump’s own outlandish tweets and rants.

We have a President who both drives the news and relies upon it. To this point, Americans had largely been shielded the existential effects of this toxic combination, but that is no longer the case. People in Puerto Rico have and will continue to suffer and die because of Donald Trump’s indifference and incompetence.

This is not to say that the media has been uniformly inattentive or is responsible for this ongoing crisis. A number of reporters, like David Begnaud of CBS, have been issuing excellent reports from the ground, and their continuing work pushed officials to finally take action.

But, going forward, media outlets will need to be far more deliberate about what they choose to cover. Yes, the President is inherently newsworthy and will generate clicks. But focusing on the shiny nonsense he tweets or shouts out at a rally can have real world consequences. In this case, these consequences are, quite literally, life and death.