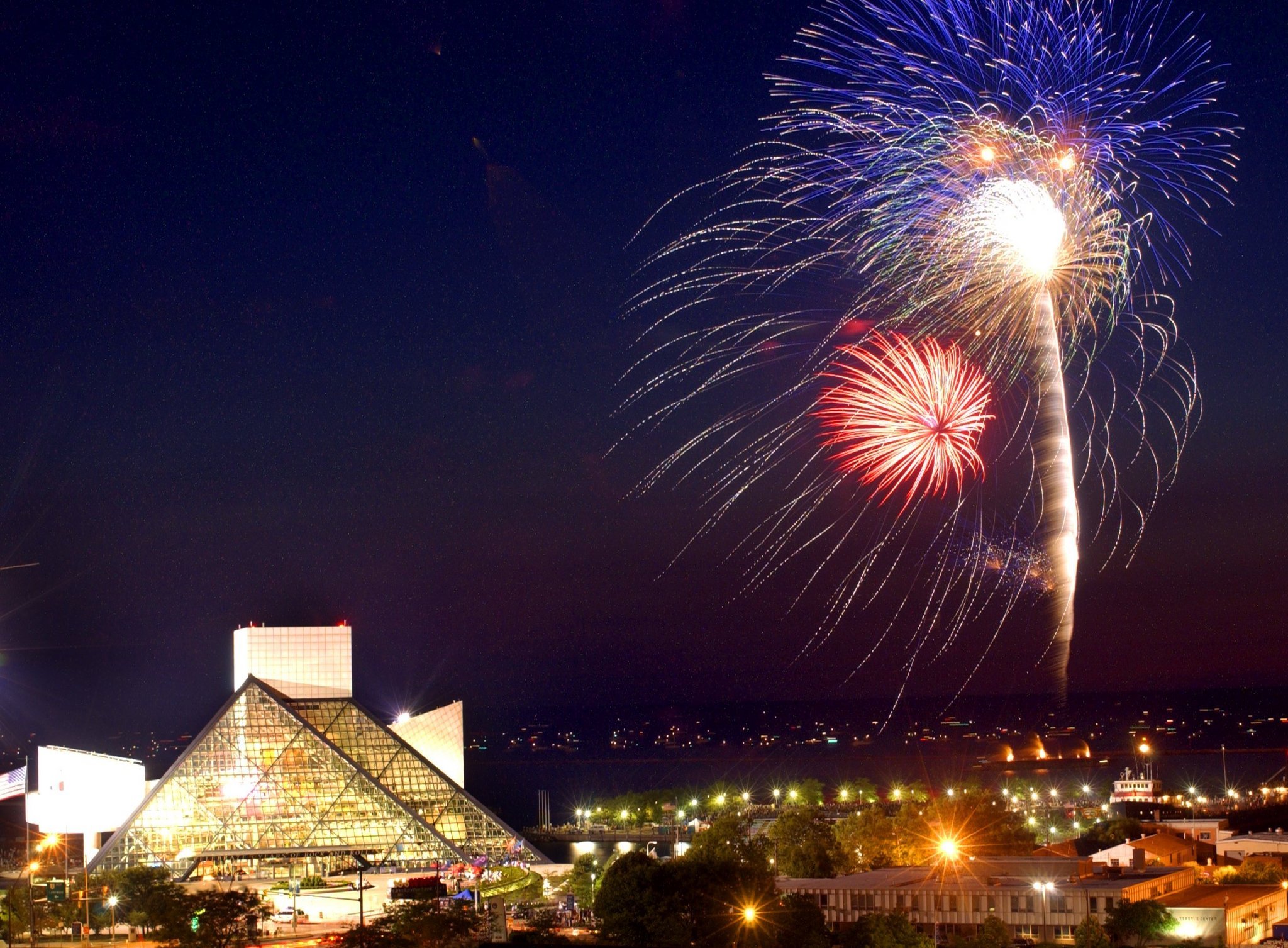 Fireworks explode over the Rock and Roll Hall of Fame and Museum in downtown Cleveland (courtesy of Cleveland.com).

If you happen to follow me on Twitter (side note: why in God’s name would you do that?), you may have noticed that I tend to take a strongly anti-fireworks stance.

Part of this stems from how much they terrify my cats. Smokey has anxiety on a good day; on July 4th, he cowers in fear for hours. The sound of fireworks can also trigger PTSD among veterans and refugees. And that doesn’t even touch on the number of people who are maimed or injured each year.

But, because I’m me, you know I’m going to make this about air quality.

Tuesday evening, we had to close the windows to our house, since the entire neighborhood reeked of sulfur. When I walked outside amidst the chaos of explosions, I noticed that the nearest side street looked something akin to an 18th century battlefield; it was nearly completely obscured by a cloud of black powder smoke.

Pollution was literally off the charts in parts of CA last night due to fireworks. PM2.5 was 436 µg/m³ in Visalia https://t.co/QeaX6pYvvS pic.twitter.com/BFMqSJPPIu

For reference, the EPA’s 24-hour standard for fine particulate matter (PM2.5) is 35 micrograms per cubic meter (µg/m3), meaning that parts of California’s San Joaquin Valley had concentrations more than 12 times that, at least for a brief period.

I pulled the one-hour PM2.5 values for Ohio from the Ohio EPA’s website to see how our air quality stacked up. One monitor in Toledo topped out at nearly 150 µg/m3, while the highest concentration in Cleveland was just shy of double the daily standard.

There’s no question that fireworks affect air quality, at least in the short-term. According to a nationwide study from researchers at NOAA, PM2.5 levels spiked by 42% on July from 1999-2013.

Based on this evidence, I decided to dig deeper into the data on how 4th of July festivities affect air quality in Cleveland to prove, once and for all, that I’m right, and fireworks are trash.

Like the NOAA researchers, I collected daily PM2.5 data for the Cleveland metropolitan area from the EPA’s air quality data portal. EPA’s data goes back to 1999, so I selected the highest 24-hour monitor value for the Cleveland area for each day from 1999-2016.

Now, if your neighborhood is like mine, illegal fireworks are not confined to the 4th; they begin sometime in June and extend well into late July.

In order to try and demonstrate that fireworks displays on Independence Day are unique, I pulled PM2.5 data for July 1-7. This approach allowed me to compare July 4 to a baseline level 3 days before and 3 days after. (One note: from 2005-2009, EPA’s PM2.5 data was only available every 3 days, rather than everyday.)

The chart below shows the average daily PM2.5 concentrations in the Cleveland area from 1999-2016. Concentrations spike noticeably on the 4th and drop off pretty quickly in the coming days. 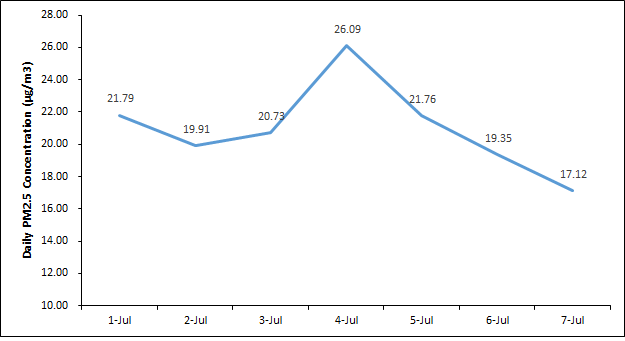 But just charting the daily average PM2.5 level cannot tell us whether or not this increase is statistically significant; there could be enough random variation that it’s not actually appreciably different than the values we see on, say, July 3.

One way to suss out whether or not two populations are statistically different from one another is to run a paired samples t-test. This test examines two groups of numbers (such as test results from before and after an intervention) and determines whether or not the differences between the two can be said to be based on more than chance. If you can say that we are at least 95% confident the differences are not due to random chance, we can say they are statistically different.

Logically, the next step is to quantify the impact of 4th of July fireworks on PM2.5  levels. I happened to have a dataset lying around with ozone and PM2.5 data from 2005-2015, along with meteorological data (high temperature, relative humidity, maximum wind speed, and precipitation) for each day during this span, so I worked from that. I then added a July 4 dummy variable (i.e. I coded each July 4 as a 1 and all other days as a 0) and ran some regression analyses.

I ran a bivariate regression analysis to see the direct influence of July 4 on PM2.5, without controlling for other factors. The results, shown below, indicate that July 4 significant increases PM2.5 levels (p=0.016).

On July 4, concentrations of this harmful pollutant spike by 8.01 µg/m3. Since the mean daily PM2.5 value during the period analyzed was 16.11 µg/m3, this represents a nearly 50% increase, which mirrors the NOAA study.

But, if you check the R2 value for this model, you see that it’s 0; in other words, the July 4 variable explains essentially none of the overall variation in PM2.5 levels from 2005-2015. That’s not particularly surprising, given that we have just 11 observations across 2,354 days.

Moreover, this bivariate analysis does not control for the effects of other variables, like temperature and relative humidity, which we know can significantly modulate air pollution concentrations. So I ran a multivariate regression analysis to account for these meteorological variables, which I pulled from NOAA datasets. 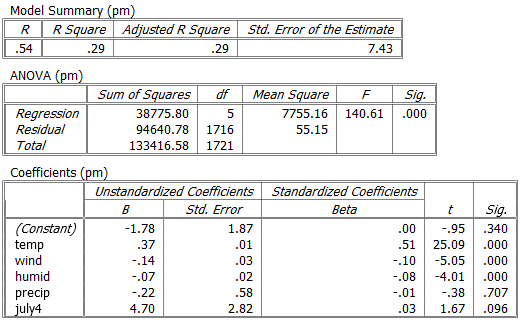 The R2 value increases to 0.29, but the effect of July 4 is nearly halved and is only significant at the 10% level.

This left me a little perplexed. But I wondered if using data from 12:01am-12:00am on July 4 could be obscuring the real effect of fireworks on air quality. People don’t stop shooting off fireworks at the stroke of midnight on July 5, that’s for damn sure.

Fortunately, I remembered that the NOAA study found that the air quality impact of fireworks lingers to around noon on July 5.

Accordingly, I created a dummy variable for July 4-5 to try and capture this effect. The pollution data for the two days are not statistically different (p=0.184), suggesting that pollution levels on the 5th are at least somewhat endogenous to those from the 4th. 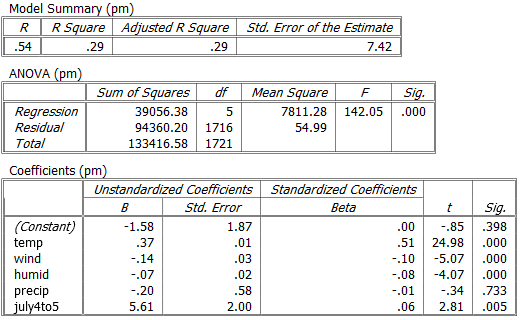 Controlling for the meteorological variables, the July 4-5 dummy variable was highly statistically significant (p=0.005), and it had a strong effect on pollution levels; PM2.5 concentrations spike by 5.6 µg/m3, or roughly 34.5% from the baseline. Take all of this with a grain of salt — we’re working with a very small sample size — but my results line up well with the literature on this issue.

Given that previous studies show that a 10 µg/m3 spike in daily PM2.5 can increase short-term mortality by nearly 1%, this result is significant.

The CDC reports that 2,712,630 people died in the US during 2015, which breaks down to 7,432 per day. If we assume that fireworks increase PM2.5 levels by 5 µg/m3 on July 4, that could mean that the associated pollution is responsible for approximately 37 premature deaths, adding the holiday’s already elevated death toll.

So it’s not just that I’m a misanthrope (though it’s also that); fireworks really are trash.