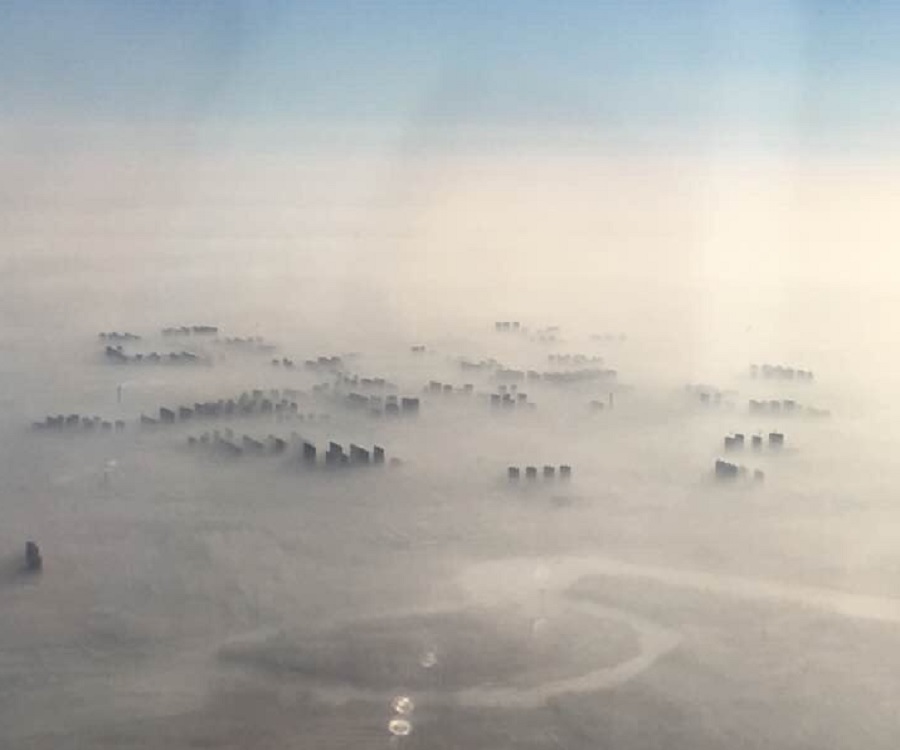 This is a very me post, so bear with me. There’s a picture of my cat at the end in it for you if you finish.

In the past few days, I came across two newsy items regarding China that caught my attention.

The first is the time lapse video below from British expat Chas Pope, who lives in Beijing. It depicts the horrific scene of a cloud of smog descending upon the city on January 2.

Beijing has long had well-known pollution issues, but the smog besetting the capital, and dozens of other cities in Northern China in recent weeks, has been historic. While fine particulate matter (PM2.5) levels actually fell nearly 10% in Beijing last year, authorities have already issued red fog alerts for 24 cities – a first in Chinese history – so far in 2017. These relatively new warnings are invoked when pollution levels exceed certain thresholds for multiple days. These types of toxic smog events – like the one in Donora, Pennsylvania in 1948 – are acutely toxic and can kill thousands of people each day.

The second was this section from a Bloomberg article on the falling costs of solar power:

In China, the biggest solar market, will see costs falling below coal by 2030, according to New Energy Finance. The country has surpassed Germany as the nation with the most installed solar capacity as the government seeks to increase use to cut carbon emissions and boost home consumption of clean energy.

Because my brain works in strange ways that even I don’t fully comprehend, these two items fused in my mind to open up a new line of inquiry. We know that China is investing heavily in clean energy in order to curb its air pollution crisis, which kills some 4,400 Chinese every single day. This rapid scaling up of clean energy should help to mitigate some of the major causes for this pollution, namely reliance on coal-fired power plants for electricity and heating.

On the surface, this question seems pretty straightforward. We know, for instance, that ground-level ozone (O3) inhibits plant growth. However, most of this effect seems to come from the O3 either clogging the stomata of the plants, limiting their ability to exchange oxygen and carbon dioxide, or from the O3 chemically reacting within the cells of the plants, damaging them and making them more susceptible to other stressors.

We also know that solar power output is dependent upon environmental factors, including cloud cover, solar irradiance, and ambient air temperatures. Accordingly, it would seem logical that air pollution could also play a factor.

Unfortunately, there is not a lot of research on this particular issue. That said, what research there is all seems to point in one direction; namely, yes, air pollution can limit solar power generation.

The impact of pollution deposition

One line of inquiry in this field of research centers on the impacts of airborne particulate settling on the solar panels themselves.

Throughout China and much of Asia, including India and Indonesia, the prime air pollutant of concern is PM2.5, which consists of various microscopic particles and drops of liquid suspended in air. Through a process known as deposition, the particles will settle out of the air, either due to rain (wet deposition) or wind (dry deposition).

When this occurs, particularly through dry deposition, the particles will cling to a surface nearby. This effect helps explain part of the reason why trees and other forms of vegetation are so effective at mitigating air pollution – leaves can trap and hold onto pollutants. But deposition can occur on nearly any surface, which is why you’ll hear stories from before the Clean Air Act about how people living in Cleveland or Pittsburgh had to change shirts at lunchtime, since they were soiled by soot and ash.

Logically, these particles can also deposit onto solar panels, if they are in the immediate vicinity. Keeping the surface of a panel clean is essential to ensuring it can capture solar radiation and convert it to electricity efficiently. Any dust from air pollution that accumulates on the panels may reduce power output through a process known as soiling.

Multiple studies have shown that soiling can reduce solar power output. In a 2001 study (paywall) in the journal Renewable Energy, Ebrahim Asl-Soleimani, Shahrokh Farhangi, and M.S. Zabihi examined the effects of panel tilt angle and ambient air pollution on solar output in Tehran.

Like many major cities with persistent pollution problems, Tehran is surrounded by mountains, which inhibits the movement of air through the city, allowing for pollution to accumulate over time. As a result, the city consistently ranks among the most polluted. Asl-Soleimani and his colleagues compared the power output of a solar panel on two days in December 1999 – one with high levels of pollution and one with clearer skies. They found that “air pollution can reduce the energy output of solar modules by more than 60%.”

John Kaldellis and Alexandra Kokala of the Technological Educational Institute of Piraeus (TEIP), a university in Athens, published a similar study in 2010. From August to September 2009, they conducted an experiment in which they exposed pairs of solar panels to ambient air pollution for different amounts of time. In addition to a control pair, they kept panels outdoors – without cleaning them or exposing them to rainfall – for 2, 4, 6, and 8 weeks.

Athens suffers from many of the same pollution issues as Tehran due to its geography, and particles readily accumulated on the panels during this period. The panels left outside for 2 weeks saw 0.1 grams per square meter (g/m2) of dust accumulation, while those left out for 8 weeks saw 1 g/m2. As the dust accumulated on the panels, over time, the output deteriorated due to falling levels of solar irradiance. At 2 weeks, panel output fell by around 2%. This value climbed to 6.5% by week 8.

Additionally, Miqdam Chaichan, Bashar Mohammed, and Hussein Kazem published an article (PDF) in April 2015 that examined the effects of pollution and dust on solar panel output in Iraq. They compared the output of a panel they cleaned by hand to one cleaned naturally by rainfall and one covered in particles from ambient pollution. Compared to the clean panel, power output fell for the naturally cleaned and polluted panels by 7.6% and 11.9%, respectively. The average efficiency rate of the solar cell on the polluted panel actually fell from 4.8% to just 1.7%, an astonishing 63.7% drop in efficiency.

According to these authors, PM10 and PM2.5 are particularly harmful to solar panels because, unlike larger dust particles, one cannot readily wash them off. As a result, the accumulation of PM can damage the surface of the panel, lowering its efficiency and shortening its lifespan.

But deposition is not the only way that air pollution can affect solar power production. Much as cloud cover can reduce the amount of solar radiation that reaches the photovoltaic (PV) cells, so too can heavy smog, like what residents of Beijing are enduring.

Mohammadreza Maghami and colleagues from Universiti Putra Malaysia (UPM) examined this issue in a 2014 article for PLOS One. In the study, they compared the output from solar panels on the UPM campus before, during, and after a major pollution event throughout Southeast Asia from June 13-19, 2013.

They authors cleaned two solar panels on June 1, then tracked their average output from before (June 1-10), during (June 11-21), and after (June 22-30) the haze, taking power output samples every 30 minutes. As the chart shows, power output plummeted as the haze set in, and ultimately jumped back up after it ended. 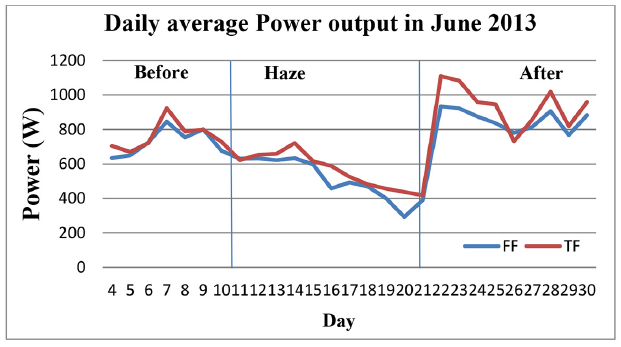 While daily average energy output was 8.5 kWh before and 10.6 kWh after the haze, it fell to just 6.5 kWh during the pollution event, a reduction of 23% and 39%, respectively. As the researchers concluded, “the effect on PV generation was strongly dependent on the haze pollution.”

Ultimately, while the literature is relatively sparse, its results are conclusive. Just as air pollution from fossil fuel combustion harms public health and the environment, it also undermines the productivity of the clean energy we are counting on to replace it. Fossil fuels suck. 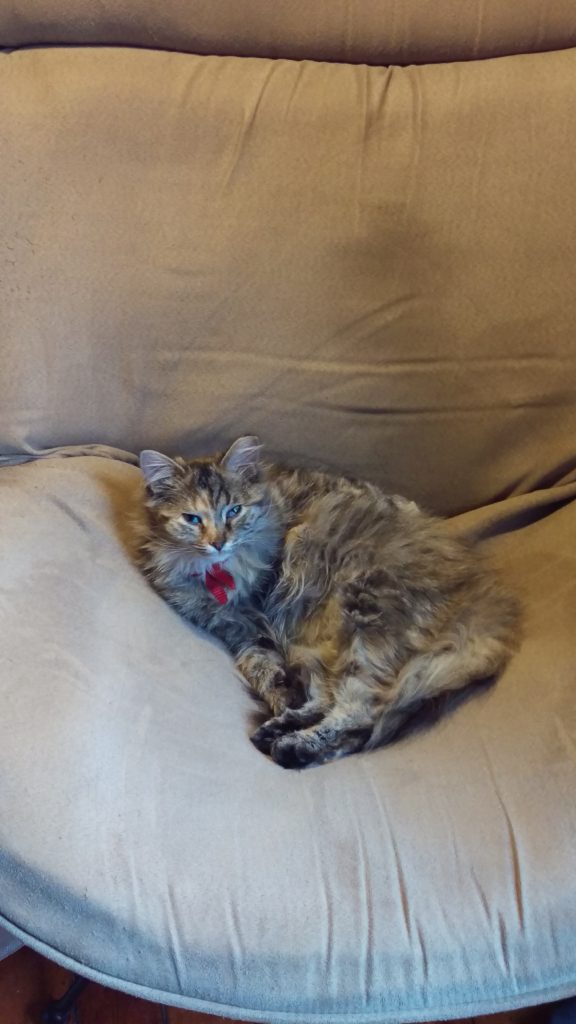