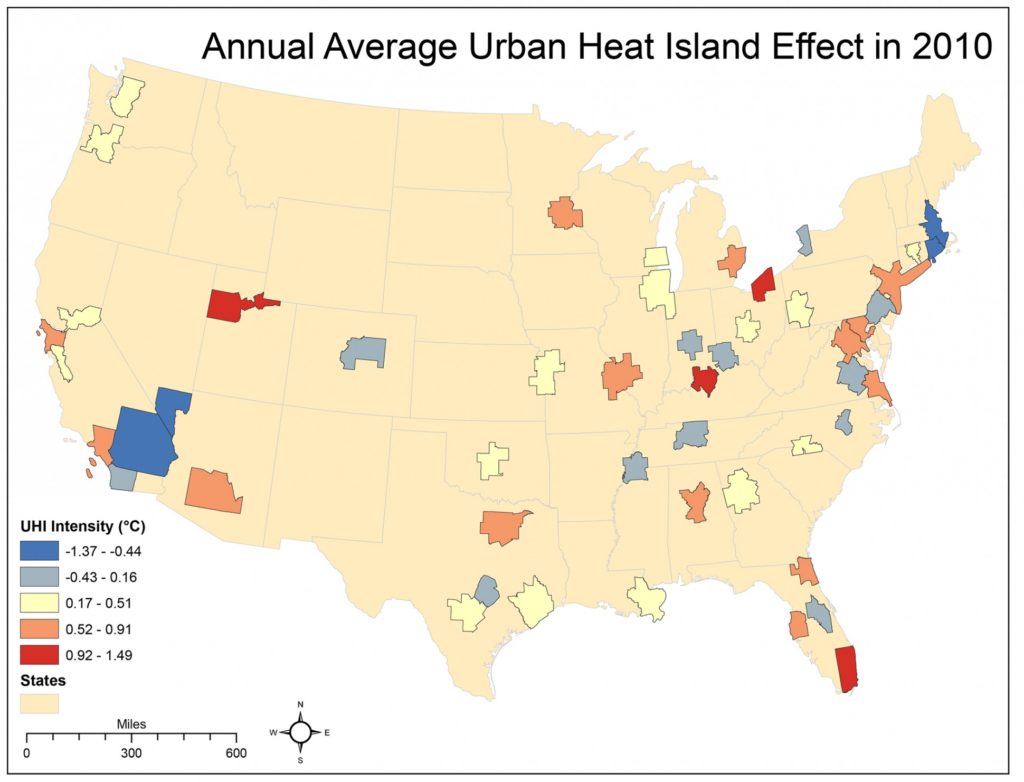 Cleveland experiences the fourth strongest urban heat island effect in the United States. Could our sprawling development patterns be to blame? (courtesy of Debbage and Shepherd, 2015).

A few weeks ago, NASA officially announced that the record-breaking, “Godzilla” El Niño event that dominated much of our weather over the past year plus had finally come to an end.

But while the monster has returned to its hibernation deep below the surface of the Pacific Ocean, its impacts have already been and will continue to be felt across the United States. Around the same time that it made this announcement, NASA also revealed that April and May were the warmest such months on record in the US, meaning that every month since October 2015 has broken the existing record for that month. This eight-month streak of heat is, obviously, unprecedented. To date, the average temperature in 2016 is 1.9°F (1.08°C) above the average for the 20th century, making it a full 0.43°F (0.24°C) above the mark for the first five months of 2015.

You remember 2015, right? The warmest year on record? Well, not for long. NASA scientists are already more than 99% certain that 2016 will break that record, just as 2015 had claimed the mantle from 2014.

The impacts of 2016’s extreme heat

The extreme heat is having clear effects. It is contributing to wildfires consuming wide swathes of the West. Ozone levels are higher than normal across the country, as high temperatures foster the development of harmful, ground-level ozone more readily. So far, Greater Cleveland has already experienced six days when ozone levels exceed 70 parts per billion (ppb), the most at this point since 2012.

But the most acute impact of high temperatures heat-related mortality, a subject that I’ve written about considerably. Extreme heat is the deadliest type of disaster in the US, killing more people than hurricanes, floods, tornadoes, and lightning strikes combined each year. As I’ve discussed in the past, climate change is only exacerbating this issue; the World Meteorological Organization (WMO) noted that the global death toll from extreme heat rose by around 2,300% from 2000-2010, compared to the previous decade.

Nearly all regions have seen a spike in dangerous heat, but the risk of heat-related mortality is not distributed evenly. While an individual’s vulnerability to extreme heat is the function of a number of factors, one of these is where s/he lives. Generally speaking, those of us living in cities are at greater risk due to the so-called urban heat island (UHI) effect. I won’t go too far into the science behind the UHI effect; suffice it to say that the combination of dark surfaces, a lack of urban trees, and the production of waste heat from various sources like air conditioners increases the temperature of cities, relative to rural areas. According to the U.S. EPA, the temperature of a large city can be more than 20°F higher than surrounding rural areas under the right (or wrong?) conditions.

Last September, Forbes published an article examining the scale of the UHI in various cities throughout the US. Strikingly, it included a map (see above) stating that Cleveland has the fourth strongest UHI effect in the country. Now, if you’re one of the literally tens of people who has inexplicably read something I’ve posted on this site, you may be familiar with my general dislike of sprawl. I’ve discussed research linking it to population decline, limited social mobility, climate change, and poor air quality, among other things.

So, I wondered, could Cleveland’s strong UHI effect be the result of our development pattern? Given that sprawl affects so many important phenomena, it seems reasonable to assume it would have an effect on UHI, right? To the peer-reviewed literature! [Cue 1970s Batman transition music].

At first glance, it may seem odd to posit that suburban sprawl would play a role here; the phenomenon is called the urban heat island effect, after all. But a handful of studies strongly suggest that sprawling development patterns do, in fact, exacerbate the UHI effect.

Two of the most convincing papers come from Brian Stone, Jr., a professor at the Georgia Tech School of City and Regional Planning and an expert on urban environmental planning and climate change.

In a 2006 study (paywalled) that he coauthored with Jon Norman from the University of Wisconsin-Madison, Stone examined the link between land use patterns and the UHI effect in Atlanta. The researchers broke properties into groups based on four variables: extent of impervious surfaces, lawn and landscaping, tree canopy, and the number of bedrooms per residential structure. This categorization enabled them to study the magnitude of surface warming produced by property type.

Stone and Norman concluded that the size of residential lots – in other words, residential density – was closely tied to black body flux, a measure of surface warming. As one moves from the highest density lot type to the lowest density, the amount of surface heat released increased 6-fold. Other land use features closed tied to suburban and exurban development – namely large lawns – also exacerbate the UHI effect. A one unit increase in the area of a plot covered by lawn and landscaping increases the net black body flux by 0.51 units.

As the authors conclude,

The results of this analysis provide compelling evidence that the size and material composition of single-family residential parcels is significantly related to the magnitude of surface warming in the Atlanta study region. Specifically, smaller, higher density parcels were found to be associated with a lower net black body flux than larger, lower density parcels…

Connecting sprawl and the UHI across cities

On its own, one study does not prove the relationship. Fortunately, Stone followed up with a 2010 paper that he co-wrote with Jeremy Hess and Howard Frumkin of the University of Washington, which studied the connection between urban sprawl and the number of extreme heat events (EHEs) in 53 cities from 1956-2005.

To measure the relationship, they took the correlation between the mean annual change in the number of EHEs from 1956-2005 and the sprawl ranking for each of the cities in 2000. Whereas the most compact cities experienced 5.6 more extreme heat days in 2005 than in 1956, that number was 14.8 for the most sprawling cities. In other words,

The most sprawling cities experienced a rate of increase in EHEs that was more than double that of the most the most compact cities…These findings are consistent with the hypothesis that urban sprawl contributes to EHE frequency.

Now, I should note that there is other research that does not jibe with Stone’s work. Last year, Neil Debbage and Marshall Shepherd of the University of Georgia took another look at urban form and the urban heat island effect. Using a different measure for UHI (the difference in average rural and urban temperatures) and a different measure for urban form (an index measuring various variables of city shape, contiguity, and land uses), Debbage and Shepherd studied the degree to which city configuration affected urban heat in the 50 largest US metro areas from 2001-2010.

Contrary to Stone, Debbage and Marshall found that both more compact and more sprawling cities experience a stronger UHI effect, provided they are highly contiguous. That is, the contiguity of urban form may matter more than its composition; designing cities so that they are made up of either cul-de-sacs or skyscrapers as far as the eye can see makes them more vulnerable to extreme heat. According to the authors,

Importantly, Debbage and Marshall note that, while compact development may not solve the UHI on its own, it does provide a litany of other benefits, from improved air quality to better public health. Accordingly, urban planners may want to promote less contiguous, higher density urban development by designing networks of smaller green spaces, expanding the urban tree canopy, and installing white and green roofs throughout cities. A 2014 study by Stone and colleagues found that implementing these types of policies can offset projected increases in heat-related mortality due to climate change by anywhere from 40-99%.

Wait, so does sprawl make the UHI effect worse?

So what can we take away from all of this?

First, yes – the evidence does suggest that sprawl exacerbates urban heat islands. Low-density, suburban-style development increases the amount of impervious surfaces, which raises lowers the surface albedo of urban areas. It also increases the amount of excess waste heat that cities produce, as larger houses require more energy. And sprawl typically leads to forest clearance for development, reducing the extent of the urban tree canopy. All told, these factors increase the amount of heat cities generate, and they prevent this additional heat from dissipating rapidly at the urban fringe.

Second, the fact that sprawling development patterns are not the only type urban form that increases the UHI effect may not be as relevant as it may seem. While dense urban areas may also promote UHIs, they also make it easier to address both the causes and effects of heat-related mortality risks. Residents of dense cities produce fewer carbon emissions per capita, mitigating climate change. And the economies of scale in these dense neighborhoods increases the efficacy of mitigating extreme heat; opening a cooling station or installing shade trees are more effective in these areas, for instance.