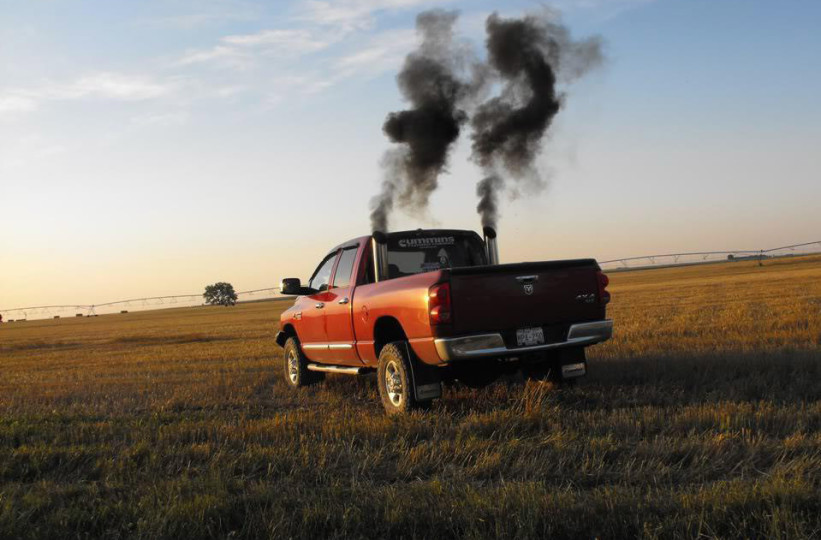 Last summer, a few media outlets reported on a strange phenomenon that was on the rise in certain corners of the country. For whatever reason, a group of Good Ole’ Boys had decided that the best way to show how much they hated environmental regulations and loved fossil fuels was to alter their trucks’ exhaust systems to release massive amounts of black soot. This practice – called “rolling coal” – has inexplicably become highly popular in some communities; its official Facebook page has more than 18,000 followers.

For the coal rollers, tampering with the emissions controls on their trucks was a way to make their personal and political ideologies manifest. Never mind the fact that the exhaust they were spitting out is a known carcinogen. No, the coal rollers claim, the people who are on the receiving end of their soot cloud probably deserve to suffer the consequences because they have the audacity to walk, or ride a bike or, God forbid, drive a Prius. That this cloud of pollution could trigger a medical emergency for someone with a respiratory or cardiovascular condition didn’t matter, because pollution is freedom. Or something.

Fast forward to this week, when we found that Volkswagen had systematically been lying since 2009 about their supposedly “clean” diesel vehicles. When the company claimed that it had discovered a way to make its cars run on diesel, all while meeting US air quality standards, boosting fuel efficiency, and improving handling, people were thrilled. Nearly 500,000 Americans bought into the hype and purchased a clean diesel VW from 2009 to 2015. All told, there are around 11 million of these vehicles on roads globally.

Volkswagen and the inadvertent coal rollers

But, as we now know, VW sold these people a bill of goods. The company had installed a so-called “defeat device” in the vehicle software that allowed it to detect when regulators were conducting emissions testing. At this point, the car would trigger its emissions controls systems, allowing it to meet the standards set by the US Environmental Protection Agency (EPA). The rest of the time, the car knew to deactivate these controls, causing it to release 10 to 40 times more nitrogen oxides (NOx) than allowed by federal law. NOx are a family of harmful air pollutants formed by the incomplete combustion of fossil fuels. They can help form fine particulate matter (PM2.5) and are a key precursor to the formation of ground-level ozone.

Based on estimates from The Guardian, those 11 million affected vehicles may have released up to 948,691 additional tons of NOx than they would have if they complied with EPA standards. In the US, the 482,000 “clean” diesels on the road likely generated 2,700 to 11,600 tons of NOx. In effect, through its deliberate deception, VW forced its customers unknowingly to roll coal.

A number of observers have discussed the implications of this scandal, discussing, for instance, how efforts to make cars smarter and more internet compatible open them up for manipulation of this sort. But I want to focus on a different issue – how this episode provides an important insight into the the challenges inherent to the US’s vehicle emissions testing system.

As Americans began pushing their representatives to address the country’s air pollution crisis, environmental regulators developed ideas on how to tackle pollution from mobile sources. On the one hand, EPA developed a set of certification standards for all new vehicles sold in the country. The Agency developed a rigorous test – known as the Federal Testing Procedure (FTP) – to measure emissions from vehicles in operation. The FTP is highly complex, and largely involves running a car through various phases to simulate, among other things, driving on a freeway and driving in urban gridlock. If a vehicle manufacturer wants to sell its cars in the US, it needs to get EPA certification that it meets federal emissions standards.

A graph showing the various components of EPA’s Federal Test Procedure for emissions testing (courtesy of US EPA).

But what happens once those vehicles are on the road? How can we make sure that they aren’t spewing out higher levels of pollution? And, if they are, how can we identify them and address this? That’s where vehicle inspection and maintenance (I/M) programs come into play. Congress first included language requiring vehicle I/M programs in areas with persistent air quality problems as part of the 1977 Clean Air Act Amendments (CAAA). Congress has amended these requirements since that point, most significantly as part of the 1990 CAAA. This bill required all areas designed as nonattainment for ozone standards to implement an I/M program. These programs typically required vehicle owners to bring in their vehicle annually or biennially and undergo some sort of tailpipe emissions test. These tests were generally a modified version of the FTP, such as the IM240, which lasts for 240 seconds.

For years, federal and state regulators promoted the benefits of vehicle I/M programs. EPA, in particular, reportedly considers it (see page 4-14) “one of the most important, if not the single most important, ozone control measure available to metropolitan areas.” According to the Agency, states that implemented its model I/M programs should see mobile emissions of hydrocarbons (HC), carbon monoxide (CO), and NOx  fall by 28%, 31%, and 9%, respectively. Given these numbers, I/M programs clearly appear to be a vital emissions control program, at least on the surface.

But it’s when we get below the surface that things get murkier. As the VW case shows, technology exists to allow vehicle owners – or manufacturers – to actively cheat on emissions tests. But drivers don’t always need to have such malevolent intentions. As Dr. Donald Steadman, a prominent critic of I/M programs has noted, vehicle emissions can vary widely from one test to another – by an order of magnitude in some cases. Emissions also demonstrate a tendency to revert to the mean. In other words, a vehicle can exceed emissions standard on one day, but that same vehicle may dip below the standard on the next day, even in the absence of repairs. Drivers who failed the first test can pass the second through sheer dumb luck.

Even when drivers do get repairs to lower emissions, these repairs are often short-lived. If your goal is only to pass the test, you may seek out a low-cost repair to allow you to game the system. These repairs rarely last, ensuring that real world emissions may spike in the period between tests. And then there’s the drivers who simply choose to skip the test altogether. A number of states, including Ohio, require vehicle owners to pass an emissions test to register their vehicles. But some drivers bypass this option by registering the vehicle outside of the I/M program area or by selling it to someone who does. A 2009 investigation by The Akron-Beacon Journal found that 1 of every 5 vehicles that failed Ohio’s E-Check test in 2008 simply “disappeared.” Of these missing vehicles, nearly 20% ended up registered in counties directly adjacent to the E-Check area.

On-board diagnostics were supposed to fix the problem

These major issues with I/M programs led state and federal agencies to do a lot of soul searching in the 1990s. In an effort to address these challenges, EPA issued a rule in 2001 requiring all states with I/M programs to begin testing the vehicle’s on-board computers. These second generation on-board diagnostic systems, or OBDII, are installed on all cars model year 1996 or newer. OBDII systems are designed to sense issues with the vehicle’s emissions control systems and turn on an indicator light – the infamous check engine light – whenever issues with these components would lead to emissions that are 1.5 times higher than federal certification standards. For comparison’s sake, traditional tailpipe tests are set to fail vehicles whose emissions are 2-3 times higher than certification standards.

In theory, OBDII tests are great. Not only do they allow you to identify issues with emissions controls, they actually tell vehicle owners about them before their cars become major polluters. But, if you’re one of the 3 people who’ve made it this far, you may guess that OBDII tests aren’t a silver bullet either. On the one hand, because they are so restrictive, OBDII tests may fail vehicles that are marginal polluters and would have passed a tailpipe test. According to the National Research Council (pg. 99), up to 70% of all vehicles with an illuminated check engine light had emissions that fell below federal standards. This can push drivers, who are often lower-income, to make expensive repairs that do little to improve air quality. Additionally, OBDII tests may not be particularly reliable.  If a driver disconnects his/her battery before going to the testing center, the OBDII system will tell inspectors to run a tailpipe test instead. And at least one study suggests that, as ODBII systems age, they becoming more likely to malfunction. The odds that a vehicle would actually fail a tailpipe test but pass an OBDII test increases by 3.3% for each year it is on the road.

So what other options are available?

Ultimately, these facts demonstrate that the current vehicle I/M program faces a number of challenges that may compromise its effectiveness. So what options are available to address these shortcomings? One potential area for regulators to expand their efforts is the use of remote sensing device (RSD) technologies. Remote sensing, which has been around for vehicle emissions testing in some form or another for more than 20 years, allows regulators to measure a vehicle’s emissions while in operation in real world conditions. Rather than trying to simulate on-road driving, you bring the testing to the road. A number of states already utilize this technology in some capacity. Here in Ohio, the E-Check program employs RapidScreen vans, which measure a vehicle’s emissions as they drive by on the freeway. This approach can exempt a small group of very clean vehicles that complete 2 successful screenings within a 9-month period.

But RSD has the potential to be expanded further. The National Research Council found that RSD tests are able to identify “dirty” vehicles with a success rate of up to 96%. It’s telling that the International Council on Clean Transportation, the organization that exposed the VW defeat device, did so through the use of remote sensing devices while driving from San Diego to Seattle. RSD tests are also highly cost-effective (they cost less than $1 per test, on average) and can test a much larger number of vehicles in a shorter period of time. It’s worth noting that some prominent conservative and libertarian scholars, including Douglas Noonan and Daniel Klein, have been pushing to use RSD as part of emissions testing for years.

Observers have called for other alternative approaches. These include extending the required manufacturer’s warranty for vehicle emissions controls systems. Under the 1990 CAAA, all car manufacturers are required to provide 8-year/80,000 mile warranties for major emissions control systems, including the catalytic converter and OBDII. But that warranty is only 2 years/24,000 miles for other emissions components that can directly affect pollution levels. Extending component warranties to 200,000 miles would place the financial burden for controlling emissions back on the vehicle manufacturers and out of the hands of individual drivers. States could also follow California’s lead and provide repair subsidies to low-income vehicle owners. Dirty vehicles disproportionately end up in the hands of those people least able to afford expensive repairs. Providing them with financial support may incentivize them to get effective repairs to cut emissions. Perhaps the fines that EPA and the DOJ ultimately level on VW could help to finance the creation of this kind of program. Or these funds could go to finance alternative forms of transportation, such as to shore up underfunded public transit systems or improve bike and pedestrian infrastructure.

It’s nice to see that Volkswagen’s deception has sparked a conversation about the impact of mobile emissions on air quality. But it also provides an important insight into the challenges that environmental regulators face day in and day out. Hopefully this terrible episode can help bring about positive change by bringing attention to the issue and garnering support to fix the cracks in the existing system.