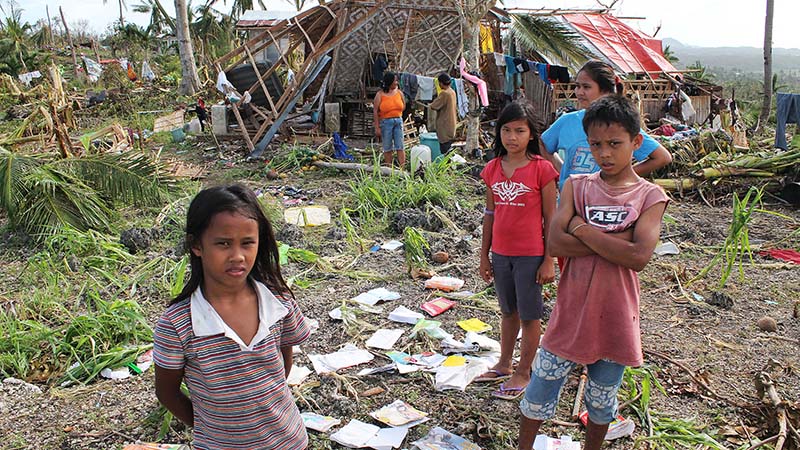 School children in the Philippines contemplate the aftermath of Typhoon Haiyan (courtesy of Pio Arce/Genesis Photos).

A number of critical issues remain unresolved, including whether countries should set a maximum safe threshold for carbon emissions and what protocols will be put in place to ensure that parties are transparent and accountable for their emissions reduction commitments. One of the trickiest outstanding issues is the question of loss and damage. For years, developing countries have called for developed states to compensate them for the negative effects of climate change, such as more frequent flooding and more intense droughts.

While developed countries committed to provide financing for climate mitigation and adaptation through the development of the Green Climate Fund in 2009, it is widely acknowledged that there are impacts of climate change which we can neither prevent nor prepare for. These residual effects are at the centre of the loss and damage debate.

This issue particularly came to the fore at the 2013 Warsaw Conference, which took place in the immediate aftermath of Typhoon Haiyan, which devastated parts of the Philippines and killed more than 6,300 people.

Yeb Sano, the Philippines lead negotiator, delivered an impassioned speech in Warsaw pushing the issue. Sano, whose hometown had been flattened by the storm, fasted throughout the conference in solidarity with Haiyan survivors. He called for parties “to make clear the difference between humanitarian aid and climate change compensation in the context of historical responsibility.”

These efforts paid off, as negotiators created the Warsaw international mechanism for loss and damage, which created a standing committee to research the issue and advise the UNFCCC over the next two years.

At last year’s conference in Lima, negotiators reaffirmed their commitment to discuss the issue, outlined the membership of an Executive Committee, and approved a two-year work plan. But discussions remain in a preliminary phase, and many developing states remain concerned that the Paris talks may fail to address the question adequately. Small island states, in particular, view loss and damage as an existential question, as climate change may threaten their very survival.

To read the rest, head over to the original post at RTCC.