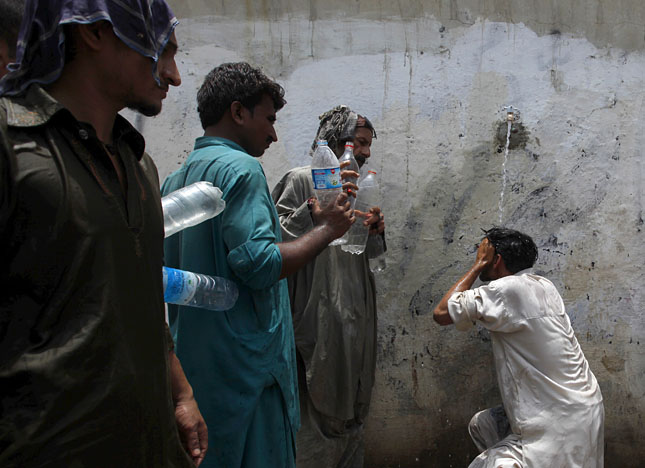 A man (R) cools off under a public tap, while others wait to fill their bottles, during intense hot weather in Karachi, Pakistan, June 23, 2015. A devastating heat wave has killed more than 400 people in Pakistan’s southern city of Karachi over the past three days, health officials said on Tuesday, as paramilitaries set up emergency medical camps in the streets (courtesy of Reuters).

Karachi, the world’s second largest city by population, is emerging from the grips of a deadly heatwave. A persistent low pressure system camped over the Arabian Sea stifled ocean breezes and brought temperatures in excess of 113°F (45°C) to the city of 23 million people in June. The searing heat disrupted electricity and water service, making life nearly unbearable. All told, officials estimate the heatwave killed at least 1,200 Pakistanis, more than twice as many as have died in terrorist attacks this year.

But meteorology alone cannot explain this turn of events. Rather, as with all disasters, Karachi’s heatwave is rooted in a complex web of natural and man-made factors. “The emergency is the product of a perfect storm of meteorological, political, and religious factors,” notes The New York Times.

Karachi’s rapid growth has heightened people’s exposure and vulnerability to heat. Since 2000, Karachi’s population has doubled, making it the fastest growing megacity in the world. This population explosion has overwhelmed the capacity of local government. At least half of all Karachiites live in informal settlements, with little access to infrastructure and vital services. Unplanned expansion has also led to widespread environmental degradation. Karachi’s annual concentration of fine particulate matter is 11.7 timesWorld Health Organization standards (and more than double that of Beijing), making it the fifth most air-polluted city in the world. Karachi also faces an acute water crisis. Some of its poorest residents survive on just 10 liters per day, one-fifth of daily drinking requirements, while some estimates suggest more than 30,000 people die from water-related diseases every year.

Wide swathes of trees and other vegetation have been cleared for roads and buildings, limiting shade and exacerbating the urban heat island effect (the process by which urbanized areas absorb and retain solar radiation, significantly increasing local temperatures). Add to this the city’s construction boom which creates a major demand for manual labor and the onset of the holy month of Ramadan – during which Muslims can neither eat nor drink before sundown – and you have a recipe for disaster.

To read the rest, head over to the original post at New Security Beat.