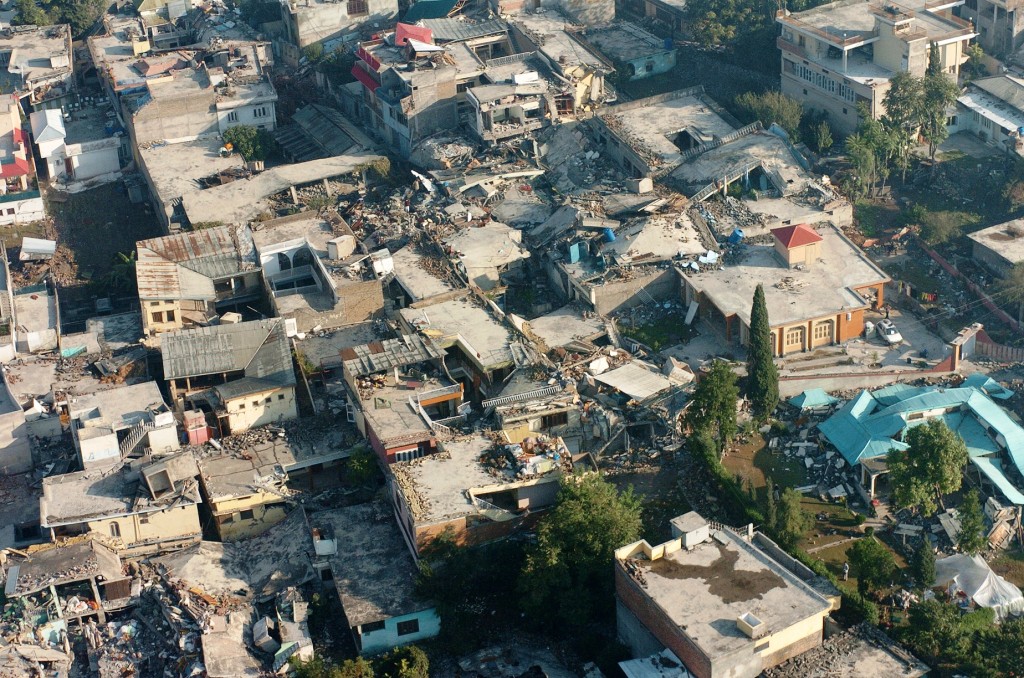 Damages to Muzaffarabad, Pakistan after the 2005 Kashmir earthquake. Muzaffarabad, the capital of Pakistan-administered Kashmir, was at the epicenter of the magnitude 7.6 quake (courtesy of Wikimedia Commons).

Earlier today, I read an article from The Conversation on why it is so difficult to develop early warning systems for earthquakes, like the one that hammered Nepal over the weekend. The piece included an interesting geological factoid:

Across the Himalayas there is around 20mm of convergence (shortening) every year, roughly half of the overall convergence between the Indian and Eurasian plates. The remainder is accommodated further north, in ranges such as the Tian Shan and the Tibetan Plateau. In other words, every year a person in Siberia becomes roughly 40 mm closer to a person in central India, as the Earth’s crust deforms across the broad region between them.

This reminded me of a story that I heard from Andrew MacLeod, a former United Nations official, back in 2013. MacLeod, who worked on humanitarian issues for a number of years, played an integral role in the highly regarded international response to the 2005 Kashmir earthquake, which killed more than 73,000 Pakistanis. Here’s how he described this episode in his memoir, A Life Half Lived:

During a particularly difficult time in early negotiations with the Pakistanis, I joked that the earthquake was all ‘India’s fault’. This gross oversimplification intended as a joke brought the desired laugh at a very tense time. Geologically speaking, the joke is true. The Indian subcontinent, by continuing to push north-eastward and under the Asian continental plate at 5 cm per year, is the cause of the region’s considerable tectonic activity. This results in many earthquakes and an on-going pushing up of the mountain ranges, making the entire terrain unstable. Regular massive landslides and geological movements give the impression that this part of the world is still being born. The magnificent geography, unstable history and the political turmoil meant that when the earthquake hit, the word ‘devastating’ could only be used as an understatement.

3 things about this anecdote: