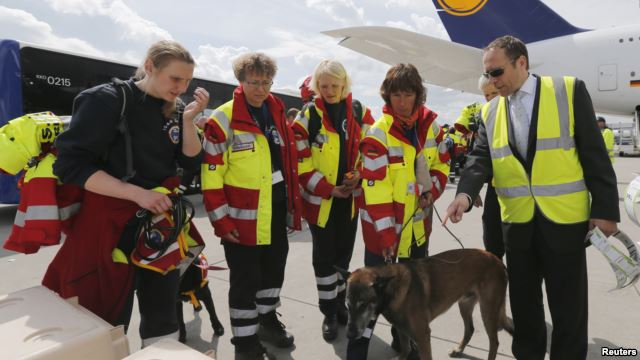 Relief workers from the German NGO International Search and Rescue prepare to head to Nepal with their dog Apache (courtesy of VOA News).

In my last post, I examined a handful of studies that explored the political drivers of disaster relief aid determinations. Two of these studies were from Travis Nelson, a political science professor at the University of Wisconsin Platteville. Unfortunately, Dr. Nelson was too busy with end of the semester tasks to get back to me before I published the original post, but he did send me a couple of thoughts last week. Below are my questions on the research and his responses.

Tim Kovach: In your 2010 article, “Rejecting the gift horse,” you argue that anocratic states are the ones most likely to reject disaster relief aid. Do you think that the Burmese government would have initially rejected international assistance after Cyclone Nargis regardless of the fact that the constitutional referendum was one week later, given its hostile relations with the West? Or was the political transition central to this decision?

Travis Nelson: Having looked at a number of these cases of aid rejection, I think the main common denominator is a fear of perceived weakness. The government of Burma/Myanmar was already weak and facing a popular revolt when Cyclone Nargis struck. Any further perceived weakness could have, from their perspective, further emboldened those efforts. India transitioned from aid recipient to aid donor not necessarily because it no longer needed aid but because it wanted to be perceived as a stronger global power. Even the Bush administration’s refusal of international aid following Hurricane Katrina seems to me to be about perception of strength (to both a domestic and international audience) more than anything else. So my read is that Burma/Myanmar rejection of aid was less about the constitutional referendum and more about these broader concerns. Although the referendum itself was, of course, a factor in these broader concerns.

Tim Kovach: I’m not sure if you have read the 2009 World Bank paper (and subsequent 2011 study) from Guenther Fink & Silvia Raedelli that argues disaster aid is nearly as politicized as official development assistance. If you have, do you have any thoughts on their argument? I know that your study does find some evidence that trade, colonial ties, and military alliances influence humanitarian aid flows, but why do you think that your results differ from some of the other literature on these points?