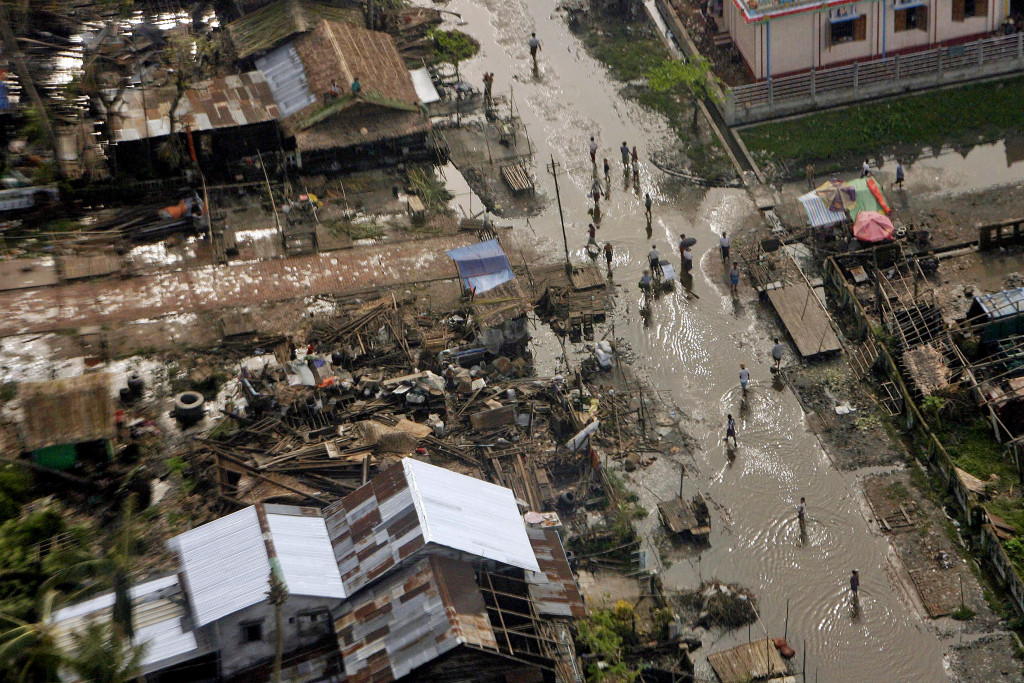 Damage in the Irrawaddy Delta after Cyclone Nargis hit Burma on May 2, 2008 (courtesy of OCHA).

Earlier this month, I wrote a piece for Vox that examined how media coverage of certain natural disasters – or the lack thereof – can significantly affect both the likelihood of a country getting relief assistance and, if it does, the amount it receives.

I don’t want to leave readers with the impression that media coverage is the only, or even the primary factor driving disaster aid decisions; far from it. In fact, there is a fair amount of research that shows how political considerations may be the key issue dictating aid considerations.

Disaster relief is a two-way street

One important factor to consider, as I alluded to in my Vox piece, is that relief aid decisions are a two-way street. Just as donor countries determine whether or not they want to provide support, affected countries can also control whether or not they request it. Without this formal request, the United Nations cannot issue a Flash Appeal, and donor countries will have no way of getting their financial, logistical, and human resources on the ground.

So why would a country hit hard by a disaster actually refuse to accept help? In a 2010 study (gated), Travis Nelson, a political science professor at the University of Wisconsin-Platteville, argued that, for countries transitioning from autocratic systems to more democratic ones – known as anocracies in political science parlance – “aid refusal…is at its core a political act” meant to show that the country’s leadership is able to handle the disaster recovery process on its own.

A recent example of this phenomenon happened in Burma, which I detailed in a 2013 paper (PDF). Cyclone Nargis struck the southern portion of the country in May 2008, killing more than 138,000 people. But rather than accepting offers of support from the international community, the country’s ruling military junta went to great lengths to keep the humanitarian community out. It waited several days to accept international assistance, and even then it only did so on the condition that it strictly control every aspect of the process. It took a full 3 weeks for then-leader Than Shwe to allow the international community to conduct a relief and recovery effort.

If you view this episode in a vacuum, the junta’s actions make no sense. Why on earth would they actively refuse support, given their clear inability to help their own people?

But, when placed in context, as Nelson argues in his study, things become clearer. Burma, which had existed on the fringes of the international community for nearly two decades at that point, had valid reasons to be wary of offers of support from Western states. These same states had spent years actively undermining and isolating the junta. Moreover, Western leaders took a number of provocative steps in the days after the cyclone that likely delayed the response effort further. The United States anchored a Navy battleship just miles off the Burmese coast, and French Foreign Minister Bernard Kouchner threatened to invoke the principle of the Responsibility to Protect as a means to forcibly initiate a response effort.

One can almost – almost – forgive the junta for fearing that Western governments might use humanitarian actions as a cover for furthering regime change. As Burma expert Andrew Selth has written, “Even paranoids have enemies.”

It’s important to point out that, in accordance with Nelson’s study, the Burmese government had recently initiated a political reform process. Nargis hit just one week before a long-anticipated referendum on the country’s new constitution, a critical part in the junta’s years-long process to slowly and partially democratize the country.

I should also note that, regardless of how irrational the junta’s fears of foreign influence may have been, they actual proved to be somewhat prophetic. Thein Sein, the country’s current president, headed up the regime’s response effort and worked closely with the United Nations and Association of Southeast Asian Nations (ASEAN). This positive interaction between Sein and his international counterparts likely hastened the country’s political transition.

The politics of disaster aid

But now we need to consider the political concerns behind the other side of the equation – donor decisions. What accounts for the fact that the US provides relief after less than 1 out of every 5 disasters?

In a 2009 working paper for the World Bank1, Guenther Fink, an international health economics professor at the Harvard School of Public Health, and Silvia Redaelli, a senior economist at the Bank, explored these factors.

As the authors note, humanitarian aid is often seen as a different animal than official development assistance (ODA). Whereas donor countries have always attached political conditions to ODA, that rule has not applied for emergency aid. Instead, “donor governments perceive emergency aid as political unconditional.” In principle, it should be apportioned according to the greatest need.

But, as Fink and Redaelli demonstrate, donor countries have consistently failed to live up to these principles. In the study, they explore the factors driving the delivery and amount of aid after 449 rapid-onset disasters. They explored the amount of aid provided in the aftermath of these events based on information from the UN Office for the Coordination of Humanitarian Affair’s (OCHA) Financial Tracking System. To control for political considerations, they add a number of independent variables, including population size, GDP per capita, Freedom House rankings, trade openness, the distance between donor and recipient state capitals, whether or not the recipient country exports oil, and how closely the donor and recipient country’s UN voting patterns line up.

They find that both the number of people affected and killed increases the likelihood of aid delivery, by 10-13% and 20%, respectively. But, more than that, political factors seem to drive the decision making process. Donors are 25-30% more likely to support their former colonies, and Western countries are far more eager to support oil producers.

Interestingly, donor countries appear more apt to contribute to disaster-affected countries that are not already aligned with their political interests. Unlike with ODA, which donors seem to use to reward their allies, humanitarian aid seems to be a tool to build better political relations. As the authors note, “If the acquisition of international consensus is on donors’ political agenda, emergency aid may well be a more visible, cheaper and more flexible tool to reach such a consensus than traditional development assistance.”

The correlation between the current allocation of aid and the actual humanitarian losses associated with natural disasters is surprisingly low.

But Fink and Redaelli dig further into the data and find that the five major donor countries – the US, Germany, Japan, Norway, and the United Kingdom – are all motivated by different interests. While the US tends to support democratic regimes, Norway is actually 14% more likely to support more autocratic countries. Germany, for its part, is 66% more inclined to provide aid to neighboring states, while Japan shows an interesting affinity for densely populated countries. And, reminding us all that the sun never set on the British Empire once, former colonial bonds increase the UK’s aid probability by nearly 30%.

The study includes two additional findings. First, the US, UK, and Norway are more likely to support oil exporters by 24%, 35%, and 39%, respectively. Secondly, the authors note evidence for a “bandwagon” effect – when more of these big 5 donors contribute to the relief effort, the total number of donor countries increases significantly.

Unlike other research, the paper also explores what factors drive private disaster aid flows. Nongovernmental donors appear more inclined to support poorer countries and are 16% less likely to provide aid to countries that get high marks for trade openness. Interestingly, private donors do not seem responsive to either the number of fatalities or whether the disaster-affected country exports oil.

Ultimately, as Fink and Redaelli conclude, “While the evidence of the various biases varies significantly across countries, the correlation between the current allocation of aid and the actual humanitarian losses associated with natural disasters is surprisingly low.”

I should note that note everyone agrees with this thesis. Nelson, for his part, authored a 2012 study (gated) that found while these types of political variables do play a role in aid discussion, “humanitarian variables are consistently significant predictors of disaster aid provision.”

So while this debate may not be entirely settled, the fact remains that the international community has a long way to go before it meets the principles laid out in the 2005 Paris Declaration on Aid Effectiveness and reiterated the 2011 Busan Partnership. If we hope to shift from a donor-recipient relationship to a true partnership, developed countries will need to more closely balance their underlying political considerations when apportioning disaster aid.

* Dr. Fink published a version of this paper (gated) in the May 2011 edition of the journal World Development.