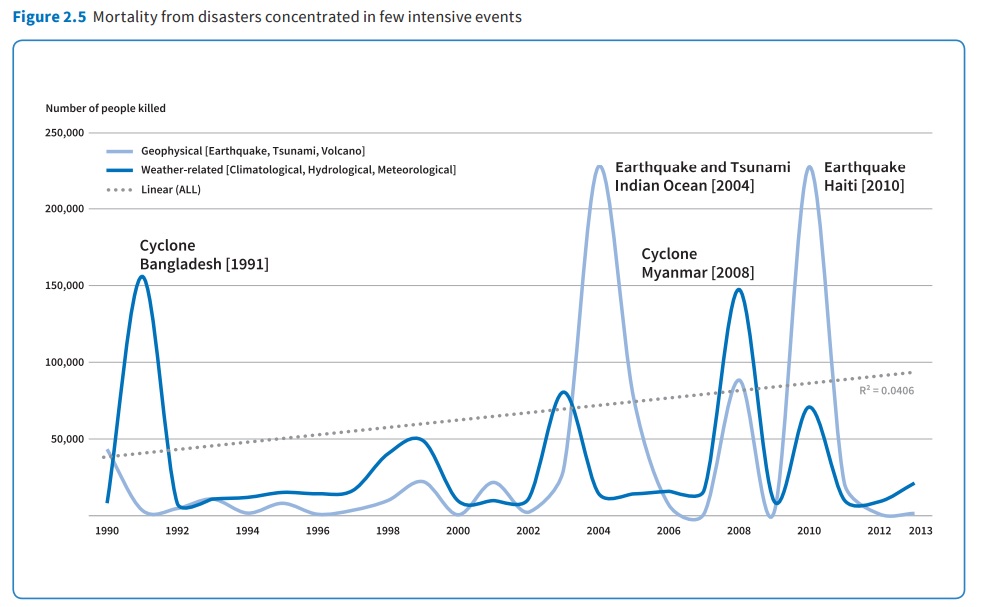 Trends in disaster mortality since 1990 (courtesy of the Global Assessment Report 2015).

I know I said that my next post would be on the Syria climate change & conflict paper; that’s coming next, I promise. But I wanted to finally get around to cross-posting this piece I wrote for the World Conference on Disaster Risk Reduction first, because it completes the logical chain I started in my last post – climate change feeds into DRR which feeds into sustainable development.

As we enter the year 2015, we approach the final target date for the Millennium Development Goals (MDGs). In many regards, the MDGs have been successful. The number of people living on less than $1.25 per day fell from 47% to 22% by 2010; the global burden from HIV/AIDS and malaria has been ameliorated significantly; and more than 2 billion people have gained access to clean water.

Despite these successes, the international community has been unable to halt environmental degradation. Though MDG 7 called for integrating the principles of sustainable development and reducing biodiversity loss, the destruction of critical ecosystems, such as wetlands and tropical forests, continues apace. Additionally, global carbon emissions have increased by 34% since 1990. Failing to stem this tide will could reverse many of the gains made through the MDGs. As Secretary General Ban Ki-Moon said last April, “Climate change is the single greatest threat to a sustainable future.”

It is for this reason that the international community proposed developing a set of so-called Sustainable Development Goals (SDGs) at the Rio + 20 Conference. These SDGs will pick up where the MDGs left off and further embed the principles of sustainable development and environmental protection.

But, just as we cannot hope to promote sustainable development without addressing climate change, we cannot expect to achieve the SDGs without tackling the threat posed by disasters. The number of disasters worldwide has spiked in recent years, increasing from roughly 100 disasters per decade during the first half of the 20th century to 385 per year from 2000-2010.

Strangely, a consensus appears to have emerged among some economists that disasters may have limited macroeconomic impacts and can actually be beneficial in the long-run. According to this theory, disasters tend to have a stimulative effect for economies by sparking large-scale reconstruction efforts and attracting financial support from the international community.

From an economic perspective, there are several shortcomings to this theory. It assumes that disasters are exogenous events, rather than part of the normal political and economic order. It is also assumes that disasters significantly alter the existing economic order. Yet, low- and middle-income states lack the capacity to replace their productive capital on a broad scale. Moreover, most developing countries lack the necessary human capital to maximize such new technologies. Accordingly, even when disasters provide a boost in the short-term, economies should ultimately return to their pre-disaster state.

More importantly, this theory ignores the political economy of disasters, which disproportionately affect the poor and vulnerable. Disasters tend to undermine the social, political, and natural capital upon which vulnerable groups depend to make their livelihoods. For one, they can severely damage the natural capital upon which most low-income households rely. It can take years, if not decades, for this capital stock to regenerate. The specter of frequent disasters also makes low-income agricultural households more risk averse. In Ethiopia, this threat has reduced economic growth by more than one-third. And disasters can create significant, long-term consequences for the most vulnerable groups. Women living in camps for disaster survivors may find themselves at an elevated risk of physical and sexual violence. After Hurricane Katrina, for instance, the rate of rape among women living in FEMA trailer camps was 53.6 times higher than the rate before the storm.

Taken together, disasters can undermine the vital coping mechanisms of low-income households. Consequently, they may become locked into debilitating poverty traps. Households need to maintain a minimum asset threshold in order to provide for their needs and retain the ability to move up the economic ladder. Evidence suggests that a large number of households fell below this threshold as a result of asset destruction during Hurricane Mitch in Honduras and the 1998-2000 droughts that affected Ethiopia. Such environmental shocks may lock poor households into spirals of poverty and degradation from which they may never escape.

It is for these reasons that the international community must embed the principles of disaster risk reduction into the SDGs. Failing to account for the deleterious impacts of disasters would undermine this enterprise and risk stymieing further progress on poverty alleviation. Moreover, as we enter a greenhouse world, the risk from climate-related disasters and environmental change will only become more apparent. The time has come for the world to mainstream disaster risk reduction and climate adaptation into development planning. The risks of not acting are too great to ignore.