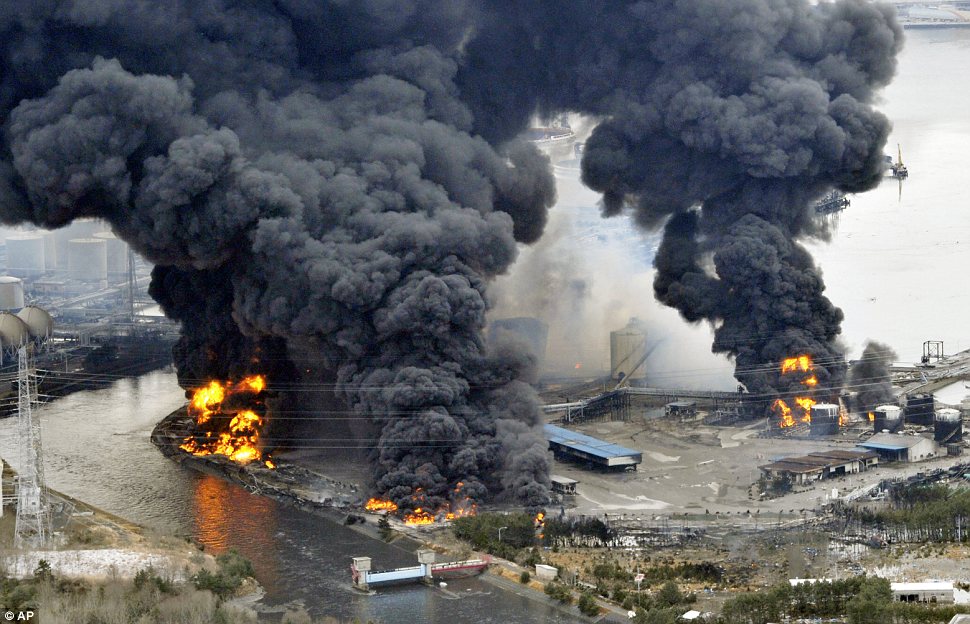 Fires rage in Sendai, Japan, following the devastating earthquake & tsunami that hit the area in 2011 (courtesy of the AP).

Next Saturday, the Third Wold Conference on Disaster Risk Reduction (WCDRR) kicks off in the coastal city of Sendai. Never heard of it? You’re not alone. Disaster risk reduction (DRR) has been on international agendas for decades, but it tends to get overshadowed by climate change. DRR is the broader, less famous, older sibling of climate change; think of it as the Frank to climate’s Sylvester Stallone.

The WCDRR is a follow-up of the 2005 conference in Kobe, Japan, which produced the Hyogo Framework for Action, a 10-year plan to reduce disaster risk and enhance resilience worldwide. That, in turn, served as a successor to the 1994 Yokohama Conference, the first international meeting on DRR, which led to the development of the landmark Yokohama Strategy and Plan for Safer World. (If you’re noticing a theme here, you’re right; Japan is more or less the center of the world when it comes to DRR. It is highly vulnerable to a number of natural hazards and has, accordingly, become a leader and innovator in this space. The 1995 Kobe earthquake, which killed more than 5,000 Japanese, served as a catalyst to place DRR onto policymakers’ agendas. Sendai, for its part, has the unfortunate distinction of being the epicenter of the 2011 earthquake/tsunami that triggered the Fukushima nuclear crisis, which is the costliest disaster in history at $235 billion.)

The Hyogo Framework defined it as a strategy to bring about “the substantial reduction of disaster losses, in lives and in the social, economic and environmental assets of communities and countries.” Minimizing the risks and damages wrought by disasters is critically important, given their dramatic costs in blood and treasure. According to the United Nations International Strategy for Disaster Reduction (UNISDR), the world lost a combined 42 million life-years annually as a result of disasters from 1980-2012. On average, disasters cause at least $250 billion in economic losses each year, a number that UNISDR expects will climb considerably due to economic growth, demographic changes, and climate change.

DRR encompasses more issues than climate change, generally speaking. While climate change will generally influence climatic and hydrometeorological disastes, DRR includes all types of disasters, including geological ones like earthquakes and volcanic eruptions. While the former varieties tend to get a lot of the attention, the latter types are often far deadlier and more destructive. 2015 marks the anniversaries of a few of these severe disasters, including the aforementioned Kobe earthquake, the 2005 Kashmir earthquake, and the 2010 Haiti earthquake. These three disasters alone killed more than 306,000 people, affected over 9.3 million, and caused more than $113 billion in damages, according to EM-DAT.

More broadly, 2015 is shaping up to be a landmark year for the international community. The WCDRR is taking place in conjunction with this September’s UN Summit on the Sustainable Development Goals and December’s Paris Conference on climate change. Unsurprisingly, given the scale of what’s yet to come, the Sendai Conference has largely stayed below the radar. You won’t see any major world leaders giving speeches like you will in New York, and the conference won’t produce a document with binding targets like we may get out of Paris. Instead, as the zero draft makes clear, WCDRR will lead to a voluntary agreement that sets global metrics for disaster impacts, defines progressive international principles for DRR, and outlines actions that governmental and nongovernmental actors can take at all levels.

Interestingly, even though many observers expect the Sendai Conference to help set the table for the SDGs and Paris Conference, these issues, particularly climate change, have thus far been nearly absent from the conversation. As RTCC noted yesterday, climate is more or less morphed into Sendai’s version of Voldemort – that which shall not be named:

But compared to a planned UN climate change deal in Paris this December, or the Sustainable Development Goals process, this is not making headlines. In part that’s because the proposals – which are still under negotiation – are non-binding and will not require countries to make any financial pledges. It’s also due to the decision by the UN office for Disaster Risk Reduction – conscious or otherwise – to delink the talks from global warming, instead focusing on wider “natural disasters”. This UN body is desperate to avoid the toxic clash of developed and developing countries its climate cousin has suffered from since the early 1990s. Even mentions of the Intergovernmental Panel on Climate Change, a UN body which has a number of publications on disaster risk, are omitted from the draft text. Presenting the 2015 Global Assessment Report on Disaster Risk Reduction on Wednesday, its head Margareta Wahlström appeared at pains not to mention the ‘c’ word.

Decoupling DRR from climate change may prove to be something of a two-edged sword, however. While keeping the two issues separate may help shield WCDRR from some of the political controversy that has tended to overshadow the UNFCCC process, it also limits opportunities to link DRR to climate change and, more broadly, the SDGs. Keeping these three critical processes on parallel tracks that rarely, if ever, intersect reduces opportunities to find commonalities. As a result, we may miss ways to use interventions or funding streams to address them at the same time. Worse yet, keeping these topics siloed may lead us to pursue projects that appear beneficial in one area, but are actively harmful in another.

What’s the international community to do? Fortunately, researchers Ilan Kelman, JC Gaillard, and Jessica Mercer have just released a paper (open access) that outlines a strategy to bring these three topics together. It’s well worth reading the whole thing.

In the article, Kelman, Gaillard, and Mercer (herein referred to as KGM) explain how some actors have framed social vulnerability as the result of individual’s “double exposure” to the effects of globalization and climate change. But, as they note, these are just two of a variety of threats that people face on a daily basis; there are also poverty, inequality, social repression, gender roles, disaster risk, environmental degradation, and the burden of disease, among others. In this environment, our focus on globalization and climate change can crowd out these other crucial issues.

Moreover, as KGM notes, some governments are actively using these two issues to pursue their own political ends:

Research in Maldives shows how climate change and globalization are being used as excuses by the government to force a policy of population consolidation (resettlement) on outer islanders. Yet the government has long been trying to resettle the outer islanders closer to the capital using other reasons, such as that it is hard to provide a scattered population with services including health, harbors, and education. Both arguments have legitimacy and can be countered, but climate change is used as an excuse to do what the government wishes to do anyway.

KGM explain how taking this three-in-one approach is the most effective way to harness the strengths of all three issues: the political and power of climate change, the historical perspective and theoretical strength of DRR, and the universal legitimacy of sustainable development. Climate may get all the attention – Lord knows I talk about it enough – but it’s important to recognize its proper place and role within a sustainable development agenda.

I think this framework holds a lot of practical power and value. In my next post, I will use it to consider the recent PNAS article on the role of climate change in the Syrian civil war.

2 thoughts on “Climate overshadows disaster risk reduction. Here’s how to change that.”