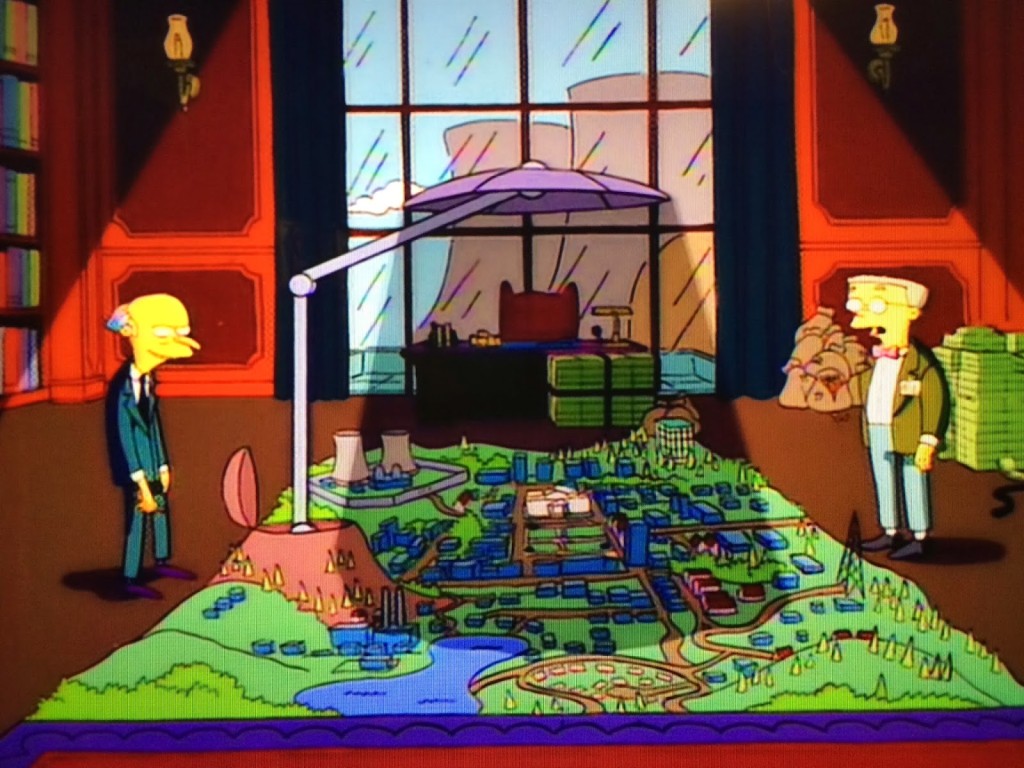 Geoengineering: The Simpsons already did it.

Last week, the National Research Council released a lengthy, two-volume report on geoengineering. The central crux of the report and the surrounding debate seems to be that, sure, geoengineering is a crazy idea, but, we need to at least research it, because we’ve gotten ourselves into this mess, and we need every tool available at our disposal. Even the IPCC has dipped a toe in the water, noting in its Fifth Assessment Report that we will most likely end up surpassing the 2ºC warming threshold if we exceed 450ppm of CO2. The only way to get back under that threshold is through the “widespread deployment of bioenergy with carbon dioxide capture and storage (BECCS) and afforestation in the second half of the century.” Given these realities, it seems logical to at least start researching geoengineering, right? It’s better to have that arrow in the quiver and never need it than need it and not have it.

The risks & rewards of geoengineering

The problem with geoengineering is that even researching it carries clear risks. In July 2013, the Woodrow Wilson Center’s Environmental Change and Security Program published a report titled “Backdraft: The Conflict Potential of Climate Change Adaptation and Mitigation.” The report includes a chapter on geoengineering (“climate engineering” in their parlance) by Achim Maas and Irina Comardicea of aldephi, a German think tank.

In their piece, Maas and Comardicea lay out the potential benefits and drawbacks of climate engineering. On the one hand, climate engineering would not need to upend our existing fossil fuel-based global energy system and may be a more appealing option for certain actors. This approach would also allow developing states space to continue to exploiting their fossil fuel reserves as a way to lift their citizens out of extreme poverty, helping to level the potential trade-offs between tackling climate change and global poverty.

On the other hand, tinkering with our climate system could generate some severe unintended consequences. First, it fails to tackle the root cause of climate change, so it is far from an actual solution. Second, it does nothing to curb the impacts of climate change outside of global warming, most notably ocean acidification. Third, the potential side effects of climate engineering could be widespread, and we cannot predict them for sure. We may end up altering the color of the sky or the chemistry the oceans. Fourth, once we start playing God with our atmosphere, we can never stop. According to a study in the Journal of Geophysical Research, if we engaged in solar radiation management (SRM) for 50 years, then stopped, we could end up getting all of the delayed warming from that period in just 5 to 10 years. That type of warming would be unprecedented, and we could have no way to adapt.

The trouble with research

But none of the above specifically explains why researching climate engineering is, in and out itself, fraught with risks. Maas and Comardicea delve into this issue at length. Because of the scope and the scale of climate engineering, we cannot accurately replicate it in a lab, and there is no way the international community would sign off on a global chemistry experiment without knowing the real world implications. And that necessitates experimenting outside of the lab.

Say we decided to inject sulfates into the atmosphere on a “small scale” in order to see if we could reduce the amount of solar radiation reaching the Earth’s surface. The risks of even a theoretically controlled experiment could be significant. Thanks to a study that also came out last week, we know that the increase in aerosol emissions in Europe and North America during the Industrial Revolution altered precipitation patterns in the northern tropics, contributing to a “substantial drying trend” after 1850.

The impacts of climate change and, by extension, climate engineering, are so distant in time and space that we would have no way of knowing exacting where, when, and how the potential consequences of this kind of experiment would play out. What if a prolonged drought occurred in the Caribbean or the monsoon shifted dramatically in South Asia? We would be unable to pinpoint the cause of such a change – whether natural or manmade – for several months or years.

And, during this period, all sorts of social and political consequences could occur. We already know, for instance, that aerosol pollution from India has intensified tropical cyclones in the Arabian Sea, including a category 4 cyclone that hit Pakistan in June 2010. Pakistan is already acutely aware of the impacts of drifting air pollution from India. What if the country experienced another disaster on the scale of the 2010 Indus River floods and decided that Indian interference in the atmosphere was to blame?

As Maas and Comardicea argue,

Even if there may be no direct connection between a state’s regional climate engineering scheme and the crop failure of another state, it may provide a convenient scapegoat and lead to increased tensions…The possibility of unilaterally implemented climate engineering, either via world powers or smaller coalitions of states, may thus lead to a “climate control race.” In the same way that states raced to develop arsenals of nuclear weapons during the Cold War, states may compete to develop and control climate engineering technology.

There is already a track record to suggest that states can use weather as a tool of war. The US employed cloud seeding techniques from 1967-1972 as part of “Operation Popeye” to try and interrupt movement along the Ho Chi Minh Trail. Such actions directly led to the 1978 Environmental Modification Convention (ENMOD), which barred the using environmental modification to cause harm. But even ENMOD has not halted efforts to control the weather. China, for instance, has widely employed cloud seeding, most famously to clear the skies over Beijing in the run up to the 2008 Olympics.

With all of these potential consequences in mind, what do Maas and Comardicea recommend to stave off the worst effects of climate engineering? In a word, governance:

In conclusion, the NRC is wrong here. We need governance, first and foremost, before undertaking research and absolutely before trying out any of these crazy ass schemes in the real world. The risks are too great to play it by the seat of our pants. I’m not here to say that we should never employ geoengineering at any point, for any reason. I think it’s a terrible idea with a dramatic downside, but there may come a time when we have no choice. Then, and only then – as a very last resort – should we be ready to employ it. But we are a long way from that point, and we are still a long way from reaching the day at which we can even begin to researching to prepare for this day. Let’s get through Paris first without saddling this conference with yet another intractable problem.