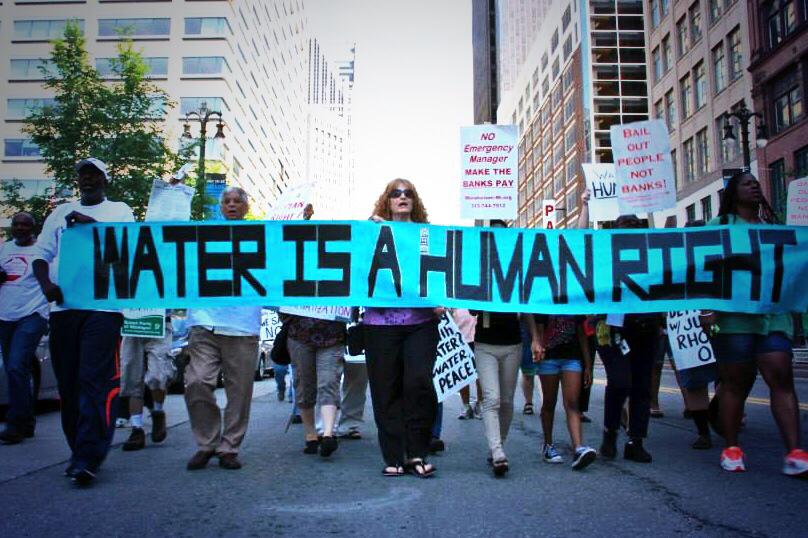 In July 2010, the United Nations General Assembly formally recognized there exists a human right to water and sanitation. The body called upon governments worldwide “to provide safe, clean, accessible and affordable drinking water and sanitation for all.”

But, apparently, that right does not apply in the United States.

You may be aware of the severe water shortages facing the western portions of the country, as it braces with an historic drought. California is on track to have its hottest and driest year on record. As of late September, at least 14 separate communities risked running out of drinking water within 60 days. Texas is also dealing with the effects of the drought. Thirty-two water suppliers in the state could run out of water within 45-90 days if conditions do not improve. One city, Wichita Falls, has even indicated that it will start getting half of its drinking water from recycled wastewater.

Now, for those of us who live along the shores of the Great Lakes, the largest surface freshwater system in the world, access to clean, reliable drinking water may not be much of a concern. With the obvious exception of what occurred in Toledo last August, I would wager that few people in Cleveland, Milwaukee, or Chicago fear that their taps may go dry. But maybe you should rethink that. In fact, one need look no further than Detroit to see the fight for the right to water playing out in real time.

In March, the Detroit Water and Sewage District (DWSD) issued a notice that it would begin shutting out service to tens of thousands of customers in the city who had fallen behind on their bills. Over the past several years, the DWSD had racked up a substantial amount of financial liabilities from a variety of sources, including a spate of risky investments that went sour during the financial crisis. As a result, DWSD has accumulated debts worth more than $5 billion, accounting for nearly 40% of total outstanding debts for the now-bankrupt city.

The shutoff process began in earnest last May, when the utility sent out more than 45,000 shutoff notices; the overwhelming majority of these went to residential customers, most of whom are low-income. In 2012, Detroit’s poverty rate climbed to an incredible 42.3%. Some 20% of Detroiters live on less than $800 per month, totaling just $9,600 per year. Nationally, the median household income was $50,502 in 2011.

Despite these numbers, residents of Detroit face water and sewer bills that easily outpace the national average. Detroiters pay roughly $75 per month for water, nearly double the $40 that the average American pays. And this price has ratcheted up in recent years. In the past decade, water rates have increased by 119% in the city, and the DWSD announced that they would increase by another 8.7% this year.

According to a report from a coalition of groups working on behalf of Detroit’s residents, 83,000 of the city’s more than 179,000 residential water accounts were delinquent as of April 30. The average amount past due for these accounts is just over $540, and DWSD has been forcing residents to pay at least 30% of these past due charges in order to restore service.

But, as a number of observers have noted, something seems amiss with this whole episode. According to records obtained by the NAACP’s Legal Defense Fund, the utility apparently failed to bill one-third of its customers due to an administrative error in 2008, creating a $115 million shortfall in revenue. Accordingly, a number of these past-due bills are incorrect. Moreover, the Sierra Club has concluded that 12% of delinquent accounts are actually from commercial and industrial users, including at least two private golf courses. Yet, despite the fact that these customers owe the city in excess of $29 million, the utility continues to target residential ratepayers almost exclusively.

In July, DWSP announced a temporary reprieve for Detroiters, when it suspended shutoffs. But this stay was short-lived. On September 29, the judge overseeing the city’s bankruptcy proceedings refused to interrupt the shutoffs, as the city “cannot afford any revenue slippage.” Astoundingly, he further claimed there is not “an enforceable right to free and affordable water.”

Unsurprisingly, this has not sat well. Last month, the United Nations Special Rapporteur on the human right to safe drinking water and sanitation released a scathing assessment of the situation in the Motor City.

Without water, people cannot live a life with dignity – they have no water for drinking, cooking, bathing, flushing toilets and keeping their clothes and houses clean. Despite the fact that water is essential for survival, the city has no data on how many people have been and are living without tap water, let alone information on age, disabilities, chronic illness, race or income level of the affected population.

Denial of access to sufficient quantity of water threatens the rights to adequate housing, life, health, adequate food, integrity of the family. It exacerbates inequalities, stigmatizes people and renders the most vulnerable even more helpless.

Clearly, for Detroit, something has got to give. But, lest you think otherwise, I must implore you, dear reader, not to think this crisis is confined to Southeast Michigan. Far from it. In fact, Detroit may simply be the canary in the coal mine, a harbinger of a much bigger problem that will face all of us in the coming years.

Much like Detroit, Cleveland is an aging, post-industrial city perched along the shores of one of our Great Lakes. And, much like Detroit, Cleveland has endured decades of urban decline which has seen its population halved and its per capita income plummet. Both Cleveland and Detroit reached their peaks during the early- to mid-20th century, a time during which the US rapidly expanded its infrastructure. As such, both cities – and many others like them – are confronted with the combined challenges of a deteriorating network of water infrastructure built for a much larger population, declining demand (and, thus, revenue streams), and limited support from the state and federal levels during this time of budget cuts.

Detroit has experienced more than 5,000 water main breaks in the past three years. A search for “water main break” on Cleveland.com returns more than 27,000 search results. Parts of the country still use wooden water pipes, while much of the infrastructure in Washington, DC dates back the Civil War.

According to the American Water Works Association, more than 240,000 water main breaks occur each year in the United States. Replacing all of these aging pipes will cost more than $1 trillion. By the 2040s, the country will need to spend nearly $30 billion each year just to keep pace with the required upgrades. Unfortunately, the resources currently do not exist. From 2008-2012, Congress appropriated just $1.38 billion per year for water and wastewater infrastructure. As a result, the burden has fallen disproportionately on cash-strapped state and local governments, who spent a combined $93 billion in 2008 alone.

This tab has been passed on to ratepayers. But the load has not been shared evenly. In Detroit, while city residents will see their bills rise by 8.7%, suburban ratepayers will only endure a 4.2% rate hike. And many of these same customers have undermined attempts to reform the utility’s structure. When Detroit attempted to form a regional utility system, the Great Lakes Water Authority, who would lease the city’s water infrastructure – pumping $47 million a year into city coffers – a number of neighboring communities revolted. Flint has even pulled out of the utility entirely.

Back in Northeast Ohio, we are facing many of the same issues. Westlake, a suburb of Cleveland that is the fifth largest water user in the network, has been fighting the city for years over water rates. The fight boiled over last November, when Cleveland City Council voted to charge Westlake residents $291 per quarter to cover system upgrades if the community left the utility network. This fight has dragged through the courts for months. Such questions about affordability, equity, and burden sharing will only get more intense in the coming years.

So what does the future hold? From 2008-2012, the US government provided $1.58 billion for for water and sanitation interventions in the developing world. All of these funds are essential for helping to ensure the realization of the fundamental human right to water for the more than 780 million people people who lack it currently. We can and must continue to sustain that investment.

But what of Americans? Do we really have the right to water? The Environmental Protection Agency says that no one should have to spend more than 2% of his/her income on water. Clearly, we are not meeting that definition of affordability for far too many Americans. In Detroit, people who have their water shut off risk having child protective services take their children away. What of their rights? As David Graham at The Atlantic recently wrote,

But the sad situation in Detroit also raises serious questions about what a citizen of a developed country—a country that not only believes itself to be the ideal model for liberal democracies around the world, but also regularly exports its way of life via commerce, capital, and sometimes military might—can expect of its government. Is a social contract still a social contract when the demands of austerity can cancel its provisions?

Water is a building block of life. Access to it is vital for human, social, and economic development. That fact is universal, and it must apply everywhere, from Detroit to Dar es Salaam.