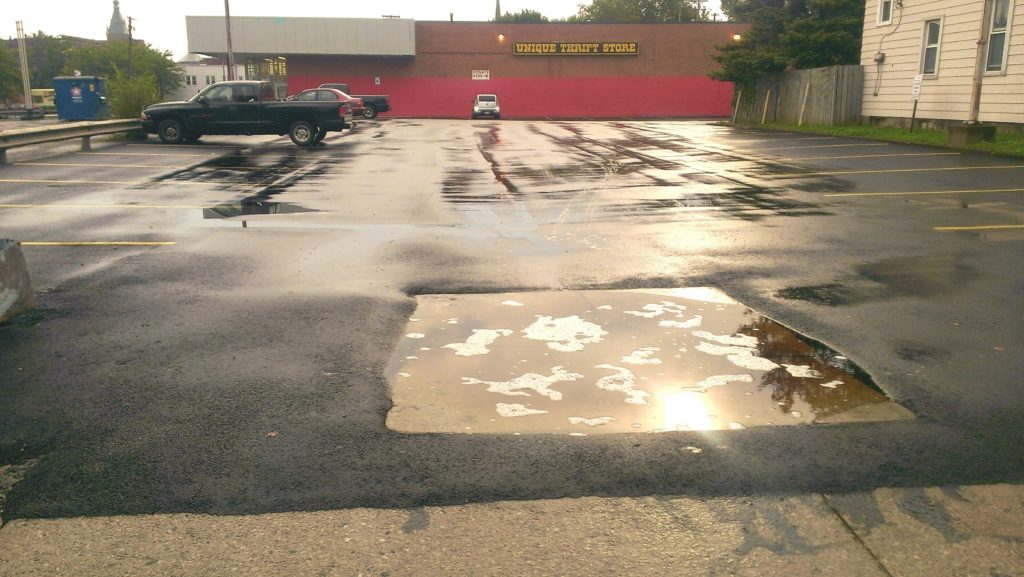 Runoff from a recent rainstorm, no doubt full of PAHs, pools over a sewer grate in this recently sealed parking lot in Cleveland’s Ohio City neighborhood.

Coal constitutes a hellish cocktail of toxic substances, ranging from heavy metals like mercury and lead to known carcinogens like cadmium and arsenic. The utilization of coal for various purposes also creates a number of harmful byproducts. These include coal ash (also known as fly ash), which is left over after coal is combusted for electricity generation, and coal tar, a substance generated through the creation of coke for steel production.

Hazardous wastes and the “beneficial use” exemption

What you may not know is that, while both substances are highly toxic and contain carcinogens, neither is currently regulated as a hazardous by the United States government. Instead, the US Environmental Protection Agency currently exempts such coal combustion residuals (CCRs) from regulation under the Resource Conservation and Recovery Act (RCRA), largely due to their potential use in other applications. This “beneficial use” exemption ensures that, if industries can find ways to reuse or recycle their waste products, they will not be subject to relevant regulations. The agency emphasizes that it “continues to strongly support the safe and protective beneficial use of CCRs.”

At the moment, 37% of CCRs are repurposed for such “beneficial uses.” These byproducts are used in various applications. Coal ash, for instance, is routinely converted into a synthetic form of gypsum, which goes into drywall. Nearly half of all American drywall is now made of this coal ash-based product. As for that coal tar, much of ends up as coal-tar-based sealcoat, which is used to cover paved surfaces throughout the US. Americans apply approximately 85 million gallons of these coal-tar-based sealants every year, easily outpacing the alternative, asphalt-based sealcoat (which itself is derived from crude oil refining).

So what’s the harm? Isn’t it good that these substances are being put to use, rather than simply being disposed? Well, that might be the case, were it not for the fact that the International Agency for Research on Cancer has ruled both byproducts to be human carcinogens.

While many groups have called attention to the dangers of coal ash, considerably less has been paid to the risks posed by coal-tar-based sealants. These products, which are becoming increasingly ubiquitous in urban areas, contain a dangerously high concentration of polcyclic aromatic hydrocarbons.

What are polycyclic aromatic hydrocarbons or PAHs?

PAHs are a large group of organic compounds composed of two or more fused benzene rings arranged in various configurations…PAHs occur naturally in coal and petroleum products and are formed by the incomplete combustion of organic matter, from fossil fuels to wood to cigarettes. PAHs have many urban sources, including used motor oil, automobile exhaust, industrial atmospheric emissions, tire particles, and asphalt.

Coal-tar-based sealants, which are particularly common in the Eastern and Central US, are composed of approximately 20-36% coal-tar pitch. Thus, these sealants contain 50,000-100,000 milligrams per kilogram of PAHs, making sealcoat the principal source of PAH pollution in urbanized areas. Coal-tar-based sealants can have PAH concentrations that are 100 to 1,000 times greater than other common sources of PAHs. The EPA currently classifies at least 7 PAHs as probable human carcinogens.

A series of recent studies clearly demonstrate the danger posed by coal-tar-based sealants. While proponents argue that sealcoat helps to “prevent pavement degradation and improve appearance,” the fact is that these sealants only last a few years, at most. The industry recommends reapplying sealcoat every 1-5 years, ensuring that pavement sealers remain a significant and near constant source of urban PAH pollution. The issue is particularly acute in areas, like Northeast Ohio, that see a significant amount of snowfall, as snow plows readily scrape the sealant off of pavement. According to a study from the University of New Hampshire, anywhere from 10-35% of total sealant mass can be lost (paywall) due to the combination of wind and snow plowing.

All of that sealant has to go somewhere. And, increasingly, it is finding its way into our bodies and our environment. Researchers from Baylor University and the US Geological Survey (USGS) studied the level of PAH exposure for children in Austin, Texas living adjacent to parking lots that were untreated and those that were treated with coal-tar-based sealants. They found that children the latter group ingested 14.5 times more PAH-contaminated indoor dust (paywall) than those in the former group, making such sealants “a primary and biologically relevant” source of PAH exposure. Moreover, the concentrations of PAHs in the house dust of these apartments near the treated parking lots was 140 times higher than dust samples from California (paywall), where lots go untreated or are treated with asphalt sealants predominate.

But not all of the PAH pollution from coal-tar treated surfaces ends up trapped in house dust or the air. On the contrary, 15% of total sealant mass gets washed away by stormwater runoff, ensuring that a significant amount of this known carcinogen ends up in our waterways. Here, it deposited in river and lake sediments, where it can create a host of issues for humans and aquatic ecosystems. Researchers first noticed this issue in Austin, where, they argued (paywall), PAH concentrations in sediments “are more typical of contaminated soils at some…Superfund sites.”

A subsequent USGS survey found that coal-tar-based sealcoat accounts for half of all PAH pollution (PDF) found in the sediments of 40 urban lakes. Once trapped in these sediments, PAHs “adversely affect amphibians and benthic communities, two robust indicators of aquatic ecosystem health.”

These findings are particularly troubling for Northeast Ohio for three main reasons.

First, the New Hampshire study found that in watersheds where 4% of the total surface area is paved with coal-tar-based sealants can see “a 100-fold increase in total PAH concentrations in surface sediments near the stormwater outfall.” Northeast Ohio is home to 48,000 acres of impervious surfaces, accounting for roughly one-third of total land area. Many of these impervious surfaces, particularly parking lots and driveways, are likely to be treated with coal-tar-based sealants.

Secondly, both the total amount of precipitation and the number of extreme rainfall events have increased significantly in this region. Since 1958, the amount of precipitation falling in very heavy downpour events has risen by 37%. In the past century, Cleveland has received more than 3 inches of rain in a day 12 times; 7 of these episodes have occurred since 1994. These trends are largely due to climate change, which will only continue to increase the frequency and intensity of extreme rainfall events. Heavy precipitation leads to additional surface runoff, elevating the level of pollution discharge into waterways.

Thirdly, the threat from coal-tar-based sealants further compounds the challenges facing the Lake Erie watershed. We know that the Lake is already suffering from invasive species, falling lake levels, and harmful algae blooms. But sealcoat may further exacerbate the threat posed by another one of the Lake’s bogeymen – microplastic. As I noted in a previous post, microplastic can easily absorb and retain suspended pollutants, including PAHs.

For someone who spends their entire lifetime living adjacent to coal-tar-sealcoated pavement, the average excess lifetime cancer risk is estimated to be 38 times higher than the urban background exposure.

Coal-tar-based sealants pose a clear and present danger to the health of both our region’s people and its aquatic ecosystems. Cleveland and other nearby communities should follow the example set by municipalities in 15 states and the District of Columbia by significantly restricting or banning the use of these sealants.