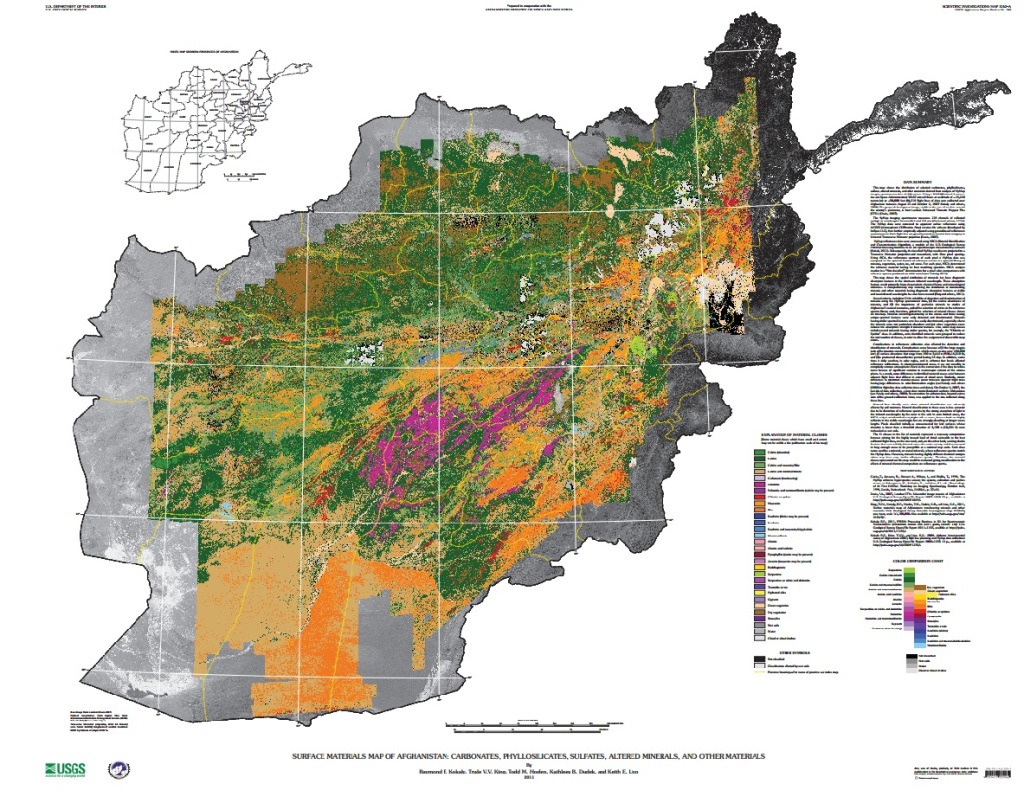 Map of estimated mineral reserves in Afghanistan, produced by the US Geological Survey in 2007. This map, along with another one focused on ferrous materials, have been used to project that the country has $1-3 trillion in available mineral reserves (courtesy of New Security Beat).

Why don’t people who don’t know I exist (and wouldn’t care if they did) follow advice that they had no way of knowing I’d even written?

Back in the winter/spring of 2012, I took a course on post-war peacebuilding with Dr. Charles Call, an expert who has worked with both the United Nations and US governments and penned Why Peace Fails: The Causes and Prevention of Civil War Recurrence.

In the course, Dr. Call broke the class into groups, each of which studied and analyzed a recent civil war and the subsequent international peacebuilding effort. Naturally, I ended up focusing on Afghanistan, because duh. For our final project, each group had to assess the risks of civil war recurrence for its respective country and identify the potential triggers that could foment such unrest. Being the only environmental policy student in a class full of peace and conflict resolution researchers, I was particularly concerned with the way that environmental issues may undermine Afghanistan’s extremely fragile peace (if one is willing to say that the country is actually “post-conflict”).

In the paper, I focused, in particular, on two main issues:

While minerals represent a major potential source of revenue, [the Afghan government] needs to remain mindful of the risks. High-value minerals have contributed to civil conflicts around the world. The case of Papua New Guinea is of particular concern. The Australian colonial government and the national government of PNG touted the Panguna mine in Bougainville as a vital source of employment and revenue. However, the mine quickly became a major fault line due to land seizures, environmental degradation, and uneven distribution of profits. Locals used these grievances to launch a ten-year civil conflict that killed 20,000 people. As a country with limited experience with large-scale mining and serious problems with governance and corruption, encouraging major investments by multinational firms is risky. [Kabul] must tread lightly in this area. Weak land tenure and administration systems create further risks for localized conflicts within the country. Efforts to override customary land tenure systems and seize property for mining may spark violence or generate additional support for the insurgency…

While Afghan mineral reserves are potentially worth more than $1.3 trillion, this number considerably overstates their true value. Due to the lack of physical and institutional infrastructure required to facilitate extraction, the net present value is unlikely to exceed $120 billion. Relying on extractive industries also carries serious potential risks, as noted earlier. The amount of money changing hands will likely foster additional corruption. In exchange for granting the Aynak copper mine to Chinese company MCC, the former Minister of Mines took $30 million in bribes. MoM also left MCC responsible for acquiring land. Without paying close attention to these issues, Afghanistan’s mineral reserves could become another focal point for conflict.

Fast forward to the present. In 2013, persistent attacks from insurgents led to MCC significantly scaling back its investment at Aynak. According to the South China Morning Post,

With copper prices falling and the Chinese economy slowing, and security in Afghanistan deteriorating, the company has yet to begin production on the site and, according to mining industry and other sources, no longer wants to abide by the terms of the contract it signed in 2007.

The company wanted to renege on building a railway, power plant and processing factory, as stipulated in its deal to mine at Mes Aynak, site of one of the world’s biggest copper deposits, the sources said.

MCC also wanted to renege on paying the remainder of a bonus worth US$808 million to the Kabul government, having already paid US$133 million, one source close to Kabul’s ministry of mines said. It also wanted to cut the royalty payments, currently set at 19.5 per cent, about double the worldwide average.

And, as Al Jazeera America reported in June, the central government’s overwhelming desire to mine, baby, mine endangers a treasure trove of thousand-year old Buddhist artifacts. This episode represents just the latest episode in a decades-long assault on the country’s social and cultural history.

One of the legendary Buddhas of Bamiyan, prior to their destruction by the Taliban in March 2000 (courtesy of Helena Wangefelt Ström).

Moreover, just last week Foreign Policy published a piece titled “Does Afghanistan’s New Mining Law Benefit Its Mafias?” The piece drew attention to these concerns that the poor management of the country’s mineral resources and the rush to extract minerals – both by the Karzai government and its Western allies – may be endangering the long-term security and development of the country:

This battle for control [over resources] “may consign the country to a prolonged war,” Javed Noorani, formerly of IWA and an expert on the resources sector, told me recently.

With the withdrawal of U.S. combat troops scheduled for December 31, and a drastic drawdown in external development aid, Noorani believes Afghanistan is transitioning not from war to peace, but “from military conflict to resources conflict.” “The Taliban are not spectators to the sector but finance their war from revenues from the sector,” he said. He believes illegal mining will allow non-state groups like the Taliban to consolidate and emerge to threaten the governments of Afghanistan and its neighbors, telling me that: “Their footprints are already here.”

Who could have foreseen such a potential calamity? Oh, right.

It’s not as though this outcome is particularly surprising; scholars and NGOs have been warning about the potential for resources to drive ongoing conflict in Afghanistan for years. Back in 2004, Jonathan Goodhand discussed the role that minerals had played in financing both the mujahideen groups during the Afghan civil war in the book War Economies in a Regional Context: Challenges of Transformation.

While most Western actors have focused on opium, the fact remains that both the Taliban and the Northern Alliance relied on illicitly exploited resources, particularly emeralds and granite, to finance their war efforts. Resource conflict is hardly new to Afghanistan; taking such an ahistorical approach to peacebuilding was destined to fail from the start. I guess the one irony in this whole debacle is the fact that western military and political leaders have used the presence of Afghanistan’s mineral wealth to justify both an ongoing counterinsurgency operation and the rapid withdrawal of forces.

If there’s one thing that I learned from my time working on the Environmental Law Institute/UN Environment Programme environmental peacebuilding initiative, it is that natural resources can be a blessing, but they often end up as a curse for post-conflict developing states. In such settings, transparency and accountability of resource extraction is paramount. Just because the US and NATO allies are withdrawing military forces (rightfully) from Afghanistan does not mean these countries do not have an obligation to push Kabul to adhere to international principles on proper natural resource management. As a party to the Extractives Industry Transparency Initiative, the country has already recognized its obligations.

It’s time for officials in Kabul, Washington, and other Western capitals to step up on this front; the consequences of inaction are too significant to ignore.

1 thought on “How Afghanistan is quickly becoming a resource conflict”