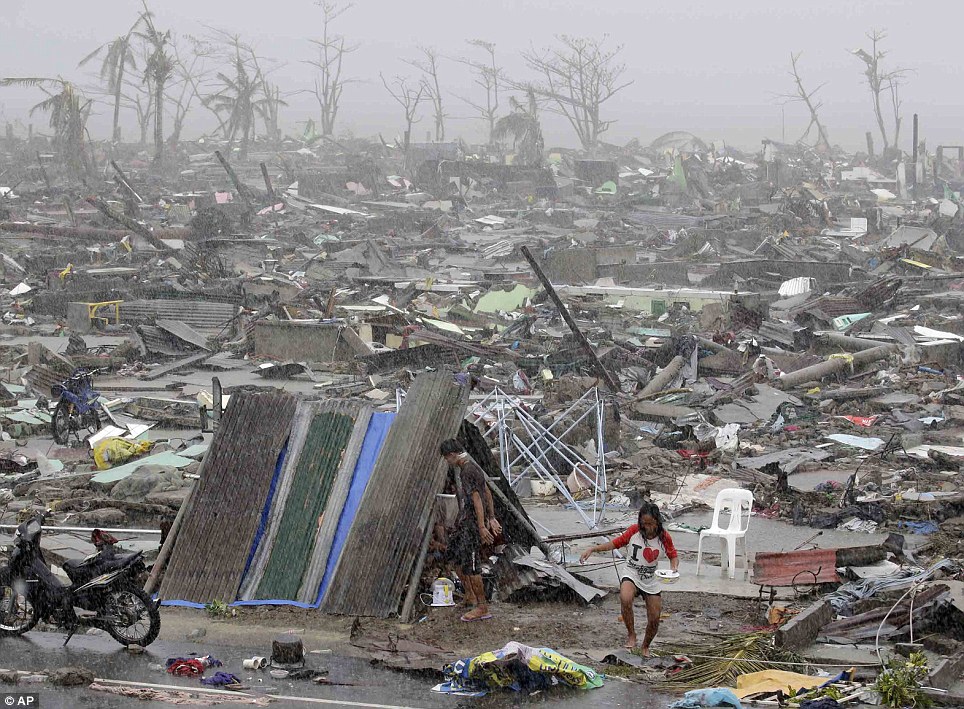 Damage in Tacloban from super Typhoon Haiyan (courtesy of The Daily Mail).

Back in March, controversial political scientist Roger Pielke, Jr. published his first post for FiveThirtyEight. The piece centered on the argument that climate change is not contributing to an increase in scale of disasters globally; rather, Pielke argued, “the numbers reflect more damage from catastrophes because the world is getting wealthier.”

To begin with, it’s not necessarily appropriate to normalize damages by gross domestic product (GDP) if the intent is to detect an underlying climate trend. GDP increase does not translate in any obvious way to damage increase; in fact, wealthier countries can better afford to build stronger structures and to protect assets (for example, build seawalls and pass and enforce building regulations). A grass hut will be completely destroyed by a hurricane, but a modern steel office building will only be partially damaged; damage does not scale linearly with the value of the asset.

Pielke’s critics also noted that he used an oddly brief time span for his investigation (1990-2013), that his use of global data tends to cover up significant differences in disaster damages among regions, and that he does not account for disaster damages that have been avoided due to investments in disaster mitigation and risk reduction. There’s also the fact that he includes geological disasters (i.e. earthquakes and volcanic eruptions) in an analysis that purportedly dismisses climate change as a factor; would it really have been that hard to get the original data on climate-related disasters directly from EM-DAT?

Not suprisingly, Pielke and a number of his friends, colleagues, and allies defended the piece, portraying Pielke as the victim of a coordinated witch hunt from climate activists and radical environmentalist bloggers. In an interview with Pielke, Keith Kloor, someone with whom I have disagreed on many occasions but respect, wrote that various commenters had “used slanderous language in an attempt to discredit” Pielke’s work. The basic argument is that few people had any real qualms with the research itself; instead, Pielke’s critics could not escape their personal feelings towards him and allowed those to color their critiques of his work.

Disaster frequency in the Asia-Pacific region

All of this is just an excessively long introduction to a new study published this week in the journal Climatic Change. In the article, researchers Vinod Thomas of the Asian Development Bank, Jose Ramon G. Albert of Philippine Institute for Development Studies, and Cameron Hepburn from Oxford University (herein known as TAH) “examine the importance of three principal factors, exposure, vulnerability and climate change, taken together, in the rising threat of natural disasters in Asia-Pacific” during the period from 1971-2010.

Now, there are three key reasons why this article piqued my interest and why its results are relevant to the topic at hand, particularly in contrast to Pielke’s research: 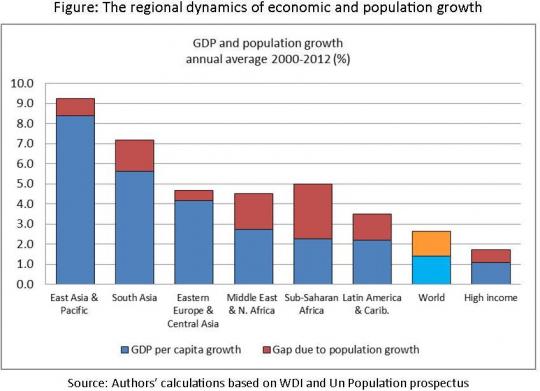 So, does this new research validate Pielke’s assertions that disasters are not becoming more frequent and, if they are (which they aren’t), it has nothing to do with manmade climate change?

Unlike Pielke, who apparently believes that normalized economic losses represents an appropriate proxy for disaster occurrence, TAH actually examine the frequency of intense disasters over a four-decade period. And whereas Pielke considers damages from geological disasters, which, – given the fact that we have not suddenly entered an age of earthquakes – are a function of increasing physical and economic exposure, these authors focus exclusively on climatological (droughts, heat waves) and hydrometeorological (floods, tropical storms, etc.) disasters, which can be influenced by a changing climate.

Moreover, TAH only consider the occurrence of intense disasters, which they define “as those causing at least 100 deaths or affecting the survival needs of at least 1,000 people.” The use of this metric ensures that any increase in the number of observed disasters is unlikely to be the result of better reporting mechanisms alone, countering Pielke’s assertion that any perceived increase “is solely a function of perception.”

TAH explore the frequency of climate-related disasters in 43 Asian-Pacific countries, using both random and country-fixed effects*, which provides them with a greater sense of the validity of their results. They use the log of population density as a proxy for population exposure, the natural log of real income per capita as a proxy for socioeconomic vulnerability, and both average annual temperature and precipitation anomalies as proxies for climate hazards. Additionally, they break the data into 5 subregions and the timeframe into decade-long spans as sensitivity tests.

Climate change is increasing the frequency of disasters in Asia-Pacific

Results show that both population exposure and changes in climate hazards have a statistically significant influence on the frequency of hydrometeorological disasters. For each 1% increase in population density and the annual average precipitation anomaly, the frequency of such events increases by 1.2% and 0.6%, respectively. The authors then applied these results to historical trends in three Asia-Pacific states – Indonesia, the Philippines, and Thailand. As a result, a moderate increase in the precipitation anomaly of 8 millimeters per month (well within the observed changes for Southeast Asia over the past decade) leads to 1 additional hydrometerological disaster every 5-6 years for Indonesia, every 3 years for the Philippines, and every 9 years for Thailand.

It is not surprising that population exposure would play a role in determining the frequency of disaster events; if a tropical storm hits an uninhabited island, it doesn’t get recorded as a disaster. But what is surprising, if you take Pielke at his word, is the clear influence of our changing climate. As TAH conclude,

This study finds that anthropogenic climate change is associated with the frequency of intense natural disasters in Asia-Pacific countries. A major implication of this is that, in addition to dealing with exposure and vulnerability, disaster prevention would benefit from addressing climate change through reducing man made greenhouse gases in the atmosphere.

Ultimately, there can be no question that climate change will, is, and has changed the frequency and nature of disasters globally. That’s not to say that exposure and vulnerability are not playing an important role; we know they are. Bending over backwards to inject climate change into every event and subject, as some climate activists are prone to do, is misleading and irresponsible. But so is cherry picking data to downplay its role in shaping the nature and scope of disaster events, when the data tell us otherwise.