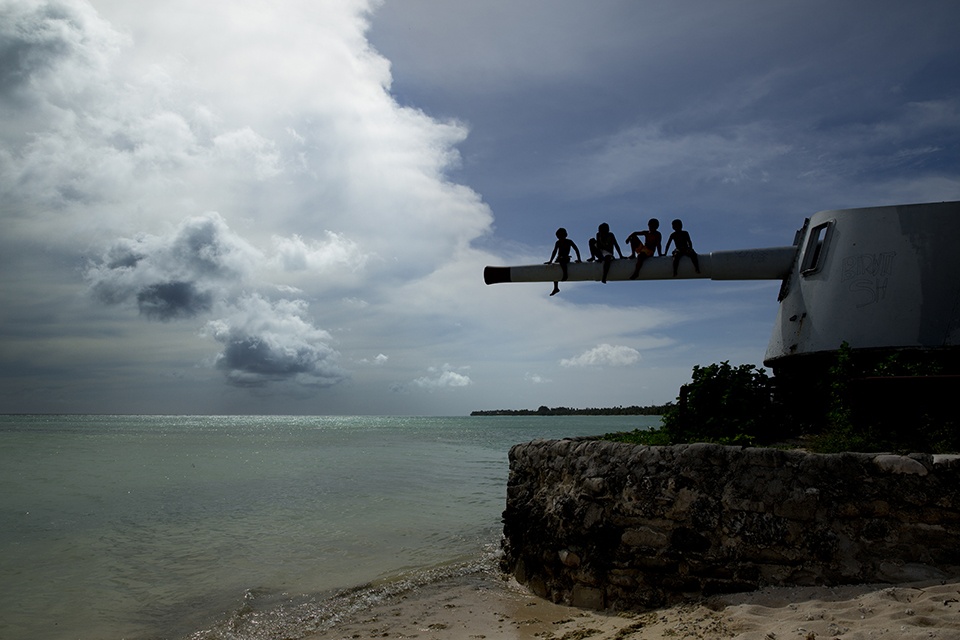 Children sit astride a Vickers gun on Tarawa Island, a remnant from the Japanese defenses on the island during World War II (courtesy of The Global Mail).

Memorial Day was yesterday, a solemn holiday to recognize those men and women who gave the ultimate sacrifice in service to their country and did not return home from the field of war.

While President Lyndon B. Johnson officially recognized Waterloo, New York as the birthplace of the holiday, the first Memorial Day took place on May 1, 1865 in Charleston, South Carolina. Here, a group of least 10,000 freed slaves staged a parade to commemorate the Union soldiers who had fought and died on their behalf. The parade took place on the site of Washington Race Course and Jockey Club, a race track that Confederate soldiers had converted into an outdoor prison for Union troops. Before the parade, 28 former slaves gathered on the site to provide a proper burial to the 257 soldiers who died in the camp’s deplorable prison and were unceremoniously laid to rest in a shallow, mass grave.

Like all holidays, it is unsurprising to see Memorial Day sometimes used to promote political agendas. Joe Romm capitalized on Thomas Friedman’s column from Saturday to discuss the links between climate change and violent conflict. According to the Los Angeles Times, President Obama is expected to highlight that connection in his major foreign policy address at West Point tomorrow.

There has been much ink spilled over the climate-conflict nexus, including a chapter in the latest IPCC Working Group II report (PDF) and the recent update to the landmark 2007 report from the CNA. Accordingly, given these clear and potentially acute links, it is unsurprising to see commentators make the connection.

I want to focus on a different connection between Memorial Day and climate change. Last week, the Union of Concerned Scientists released a report documenting how climate change threatens vital national landmarks, including the historical Jamestown settlement and Cape Canaveral. We’ve already seen firsthand how rising seas and more severe storm surges can damage important sites, as evinced by the inundation of Ground Zero during Superstorm Sandy.

The Battle of Tarawa

But not all of these threatened landmarks are located in the US. Halfway around the world lies the small island nation of Kiribati (prounounced KIRR-i-bas), an archipelago of 33 coral atolls and islands that sits astride the Equator in the Pacific Ocean about 3,100 miles east of Australia. The country’s capital and largest city, South Tarawa, sits on the narrow coral atoll of the same name. More than 50,000 Kiribati – almost half of the country’s population – are squeezed onto this small islet just six square miles in area.

While this nation exists as little more than a blip in international politics or the global economy, it played an outsized role in the fight for supremacy in the Pacific Ocean during World War II. As The New York Times discussed on the 70th anniversary of the Battle of Tarawa,

By themselves, the islands held little value to the Japanese or the American government. They were situated about halfway between Pearl Harbor and the Philippines and were barely large enough to hold an airfield. But they served as an essential steppingstone across the Pacific: If American bombers wanted to reach Japan, they would need an air base in the Mariana Islands; to capture the Marianas, they would first need the Marshall Islands; and for the Marshalls, they needed Tarawa. To fortify the atoll, the Japanese sent in 3,800 imperial troops, along with 1,200 enslaved Korean laborers to be thrust onto the front lines. They spent a year building concrete bunkers and planting massive cannons along the beaches. The leader of the Japanese garrison, Rear Adm. Keiji Shibazaki, predicted that it would take “one million men, 100 years” to seize the islands.

Beginning November 20, 1943, some 35,000 Marines stormed the island in an attempt to wrest it from Japanese control. By the time the fighting ended three days later, roughly 6,400 Japanese, Koreans, and Americans died. This number included around 1,100 Marines who, though they fell, did not die in vain. Their sacrifice allowed their comrades to seize the island and establish an essential foothold for Admiral Chester Nimitz’ island hopping strategy. Adm. Nimitz reportedly said that “The capture of Tarawa knocked down the front door to the Japanese defenses in the Central Pacific.”

Unfortunately, the tropical heat eliminated any hope for a proper, dignified burial of the dead. The surviving Marines quickly buried their fallen comrades in shallow graves (due, in part, to the island’s low water table), then moved on. Military engineers soon moved in to pave over much of the island and construct an airfield. When crews returned to Tarawa in 1946 to exhume the remains of the Marines, the haste of the burials and poor record keeping made their task nearly impossible.

Forensic investigators located just half of the buried Marines. Supplemental crews, both official and volunteers, have helped to locate the unidentified remains of just over 100 others. But perhaps 520 Marines remain buried somewhere in the sands of South Tarawa. 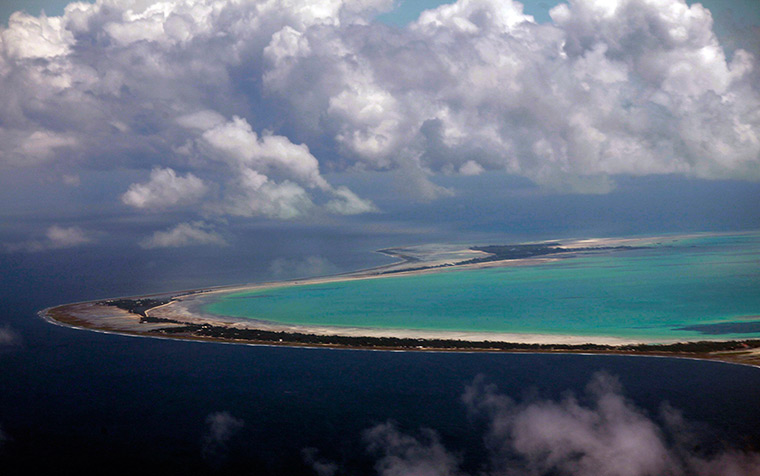 North and South Tarawa islands in Kiribati (courtesy of The Guardian).

Today, as in 1943, Kiribati sits on the front lines of the world’s greatest crisis. This crisis is not a world war, but the battle against global climate change. Most of Tarawa lies less than three meters above sea level, while the country’s entire land area sits, on average, just 1.3 meters above the Pacific. Under a high emissions scenario, the IPCC projects that global sea levels will rise by 52-98 centimeters by 2100. That number is likely low, however, as the report excludes recent research that shows more ominous trends, such as the news this month that the West Antarctic Ice Sheet has entered an irreversible (if gradual) collapse.

Additionally, Kiribati’s location makes it even more vulnerable to sea level rise (SLR). It is located in the Western Pacific Ocean, where seas have been rising three times faster than the rest of the globe. According to the World Bank, by 2050 – within my lifetime – some 54-80% of South Tarawa could be fully inundated (PDF). 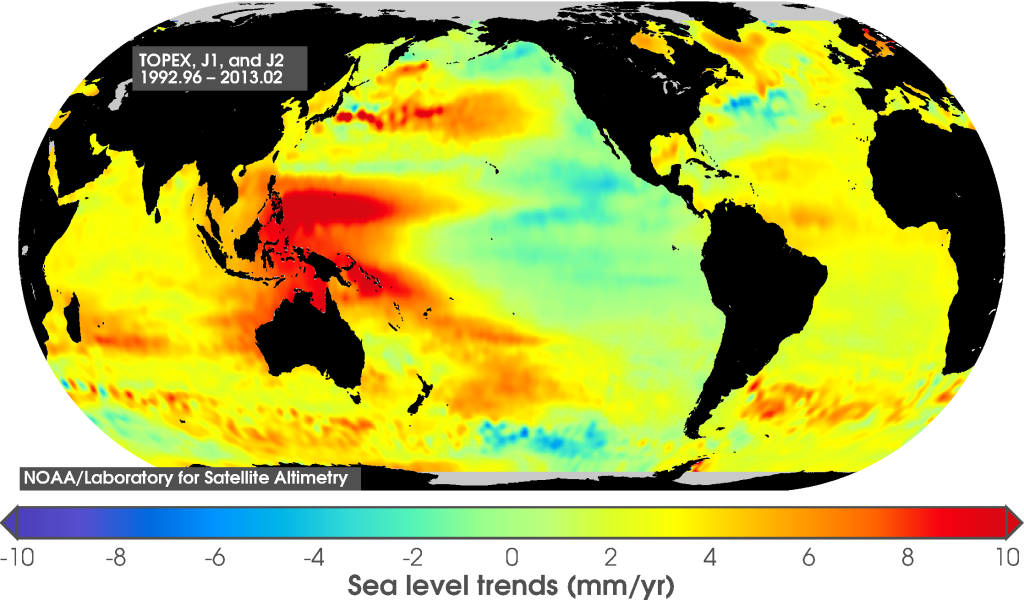 Rates of sea level rise in the Pacific Ocean (courtesy of NOAA).

Clearly, Kiribati is at tremendous risk. Anote Tong, the country’s president, has been pushing a policy of “migration with dignity,” whereby he works with neighboring states to take Kiribati migrants. Stating that his country has perhaps three decades before it becomes uninhabitable, President Tong recently purchased more than 6,000 hectares of land in Fiji. This represents just one of his contingency plans for his endangered (and rapidly growing) population of more than 100,000.

Ultimately, it won’t be too much water but, rather, too little water that dooms Kiribati and other small island states. That’s because, as sea levels rise, saltwater pushes into underground freshwater reserves. This process, known as saltwater intrusion, contaminates the freshwater resources upon which the islands’ residents depend. The IPCC has projected that South Tarawa’s supply of underground freshwater will shrink by two-thirds through 2050. This, along with the repeated impacts of more intense storm surges on infrastructure and crops will likely push those left on the islands to flee long before the seas reach their doorsteps.

Climate change will seriously challenge our existing international law system. Will we redefine refugee to include climate-induced migration? Can our definition of national sovereignty stay the same in a greenhouse world? Is it really possible for a nation-state to exist when its people have all left and its territory lies under the sea?

President Tong has proposed one possible solution to the latter issue. He has suggested that, in a worst case scenario, the Kiribati government could establish an outpost on Banaba atoll, which, at 81 meters above sea level, is the highest point in the country. This would allow the Kiribati state to maintain at least a ceremonial presence in its territory, even if most of it lies empty.

But the 520 US Marines who lie buried under the beaches of South Tarawa will not be so fortunate. They will not get the same dignified burial as those 257 Union soldiers in Charleston, nor will they get a tangible memorial like the Tomb of the Unknown Soldier at Arlington Cemetery. Unless we act immediately, both to search for their remains and to curb the carbon pollution that is driving climate change, these brave men who fought and died for their country will end up interred, anonymously, under the sea forever.