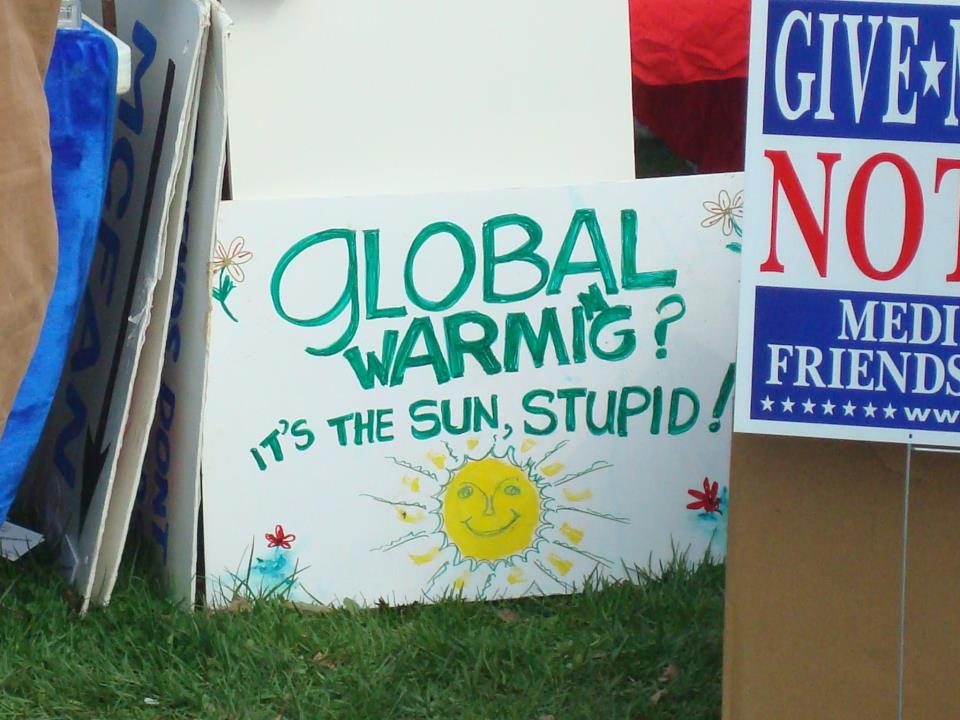 One of the more brilliant signs I saw at the fall 2010 Tea Party Rally at the Cuyahoga County Fairgrounds.

For years, climate hawks have devoted considerable time and energy to refuting arguments proffered by those who deny the basic tenets of climate change. This focus on countering climate deniers is evinced by the prevalence of handy lists of counter-arguments, including those from Skeptical Science, Grist, and Scientific American.

But, as I emphasized in a recent post, outright denial of the science is no longer the most potent weapon that “skeptics” have at their disposal. Instead, many of these actors have turned to denier 2.0 arguments, which frequently center on what Young and Coutinho term (paywall) the “acceptance-rejection approach.” This rhetorical acceptance that climate change is occurring opens up new pathways to forestall action on the issue by lulling the average observer into a false sense of security.

And, according to a recent article in the journal Global Environmental Change, this form of climate “skepticism” is exactly where we should be focusing our energies.

In the article, Drs. Stuart Capstick and Nick Pidgeon from the University of Cardiff develop a new taxonomy of climate change skepticism (or, as they British-ly spell it, “scepticism”). Using a mixture of quantitative and qualitative methods, the researchers define two basic types of climate skepticism – epistemic and response skepticism.

Response skeptics, in contrast, don’t explicitly reject the science of anthropogenic climate change; in fact, many of them accept it. Despite this acceptance, however, response skeptics:

employ this type of skepticism to justify or explain lack of personal action on climate change, or as a way of distancing themselves from the need or requirement to do so.

Theses skeptics routinely question the effectiveness of potential responses to climate change, doubt that politicians can work together to address the issue, believe that the media exaggerates the risk, and are prone to fatalistic worldviews. Response skeptics are fare more likely to demonstrate a lack of concern over climate change as an issue than epistemic skeptics, perhaps due to the fact that many from the latter group may define themselves in opposition to climate “alarmists” and scientists engaged in the “greatest hoax ever perpetrated on the American people,” as Senator Inhofe has claimed.

As the research from Young and Coutinho demonstrated, smart climate deniers have begun to play more to such response skeptics by utilizing the acceptance-rejection approach. Accordingly, Capstick and Pidgeon argue that climate hawks should focus more directly on this audience as well. As they note:

whilst there are clear arguments that can be made concerning the level of scientific consensus and degree of confidence in an anthropogenic component to climate change, doubts concerning personal and societal responses to climate change are in essence more disputable.

Though it has become increasingly difficult to sway epistemic skeptics (who fall into either the “Doubtful” or “Dismissive” categories in the Yale “Six Americas” construction), response skeptics (the “Concerned,” “Cautious,” and “Disengaged”) are still persuadable. Moreover, these three groups accounted for 55% of Americans as of November 2013, far more than the 27% who identify as “Doubtful” or “Dismissive.”

Most response skeptics view climate change as an issue that will largely affect people who are distant in both space and time. They fail to see it as an immediate, concrete issue that will affect them or the people they know and love. Accordingly, emphasizing the dire impacts that climate change is likely to have or is currently having in Bangladesh, the Philippines, or small Pacific island states will not only fail to motivate them to act, it may actually make them feel less engaged and more hopeless (PDF) about the issue, leading to greater inaction and division.

Accordingly, Capstick and Pidgeon discuss the need to focus on ways to localize climate change, as previous research has emphasized. As Lorenzoni et al noted (PDF) in a 2010 study,

Local environmental issues are not only more visible to the individual, but present more opportunities for effective individual action than climate change.

Rather than devoting so much of our time, resources, and energy to convincing people about whether Antarctic sea ice is waxing or waning, climate hawks should look to connect the issue to local environmental concerns. And one of the most effective ways of achieving this goal is to frame climate as a public health issue. According to research published in 2012, framing climate change as a human health issue “was the most likely [way] to generate feelings of hope.”

Making the link between health and local environmental challenges in a greenhouse world may represent the single most effective strategy for getting people from response skeptic to climate hawk. I have tried to do this by focusing on heat-related mortality in Cleveland, Great Lakes levels, and issues of microplastic pollution and algal blooms in Lake Erie. Fortunately, there now exist a number of excellent tools that allow people to bring climate models down to the local level, from these new interactive Google Maps from Berkeley Earth to “Your Warming World” from New Scientist.

Hearing and reading nonsensical rants from climate deniers gets my blood boiling just as much as any other climate hawk. But, given the amount of research available on this issue, perhaps we should all try to take a step back, realize the deniers are trolling us, and focus on more constructive efforts instead.