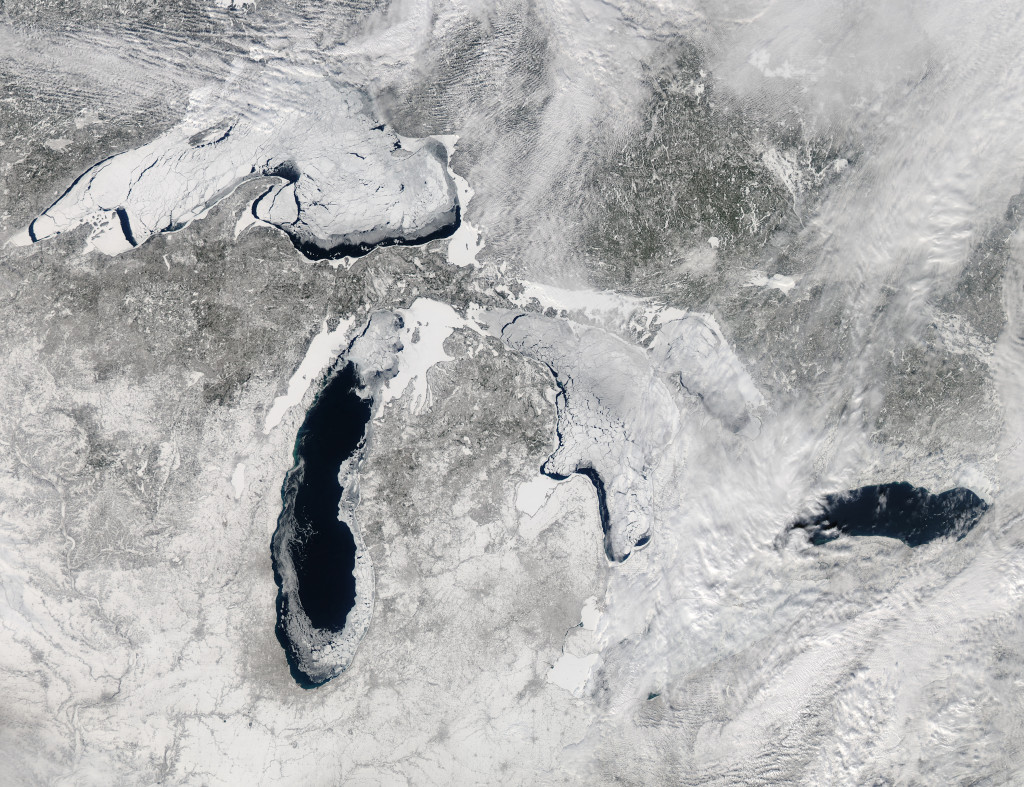 Ice engulfs much of the Great Lakes in this image from February 19 (courtesy of NASA Earth Observatory).

If you already thought that the impacts of climate change were incredibly complicated and, often, downright confusing, I’ve got bad news for you – things just got even more complex.

For years, researchers focusing on climate change concluded that increases in heat-related mortality would, by and large, be accompanied by decreasing cold-related mortality. As winter temperatures warm – which they have at an extremely fast rate – the health risk posed by extreme cold is assumed to decrease in a nearly inverse proportion. In its Fourth Assessment Report (AR4), for instance, the IPCC highlighted research that projected cold weather deaths would decrease by 25.3% in the United Kingdom from the 1990s to the 2050s.

But a new study in Nature Climate Change calls this assumption into question (paywall). As the study’s authors note:

In order to explore the potential effects of climate change on winter mortality rates, the authors analyzed the factors which contributed the number of excess winter deaths (EWDs) in the UK from 1951-2011. They found that, across this entire span, housing quality, heating costs, the number of cold winter days, and influenza accounted for 77% of variation in annual EWDs.

[W]e show unequivocally that the correlation between the number of cold winter days per year and EWDs, which was strong until the mid 1970s, no longer exists.

But, the authors don’t stop here. They continue by explaining that climate records actually suggest that “winter temperature volatility has increased in the UK over the past 20 years,” despite global warming. As I discussed in a previous post on heat-related mortality, the ability of people to acclimate to local weather patterns is a key determinant in temperature-related mortality rates.

As winters continue to warm, people will slowly see their comfort baseline shift; accordingly, when extreme cold snaps, like the Polar Vortex that hit the Eastern US in January, occur,

The nefarious effects on EWDs could be substantial, with especially the vulnerable being caught off-guard by abrupt changes in temperature.

Due to this increasing volatility in winter temperatures, population growth, and the continued graying of populations (people aged 65 and over are far more susceptible to influenza), it’s entirely possible that global warming could actually increase cold weather mortality rates.

A similar study from fall 2012 (paywall), also published in Nature Climate Change, lends further credence to this research. The article examined the influence of climate change on mortality rates from extreme temperatures in Stockholm; the authors compared mortality rates from 1900-1929 to those from 1980-2009. 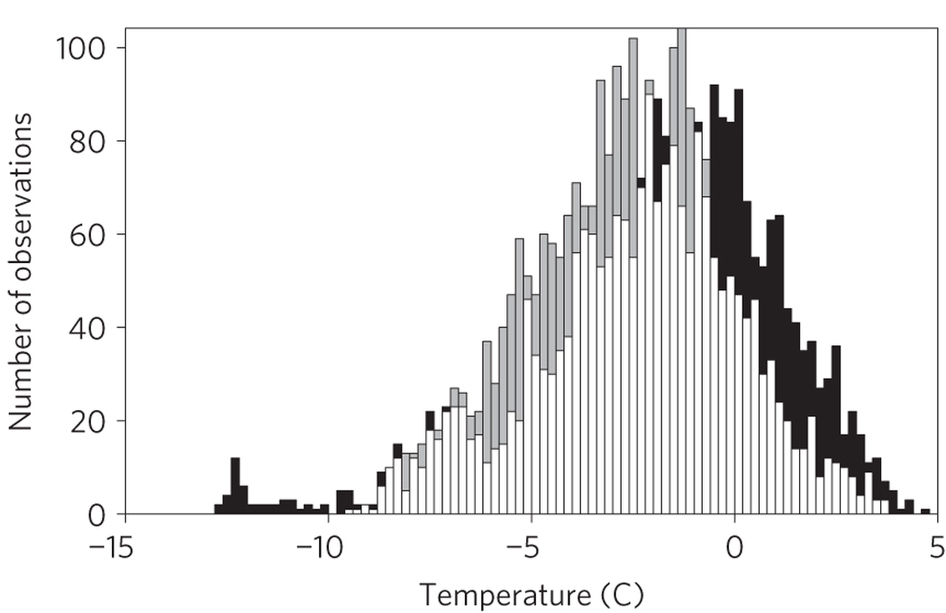 The study, which examined changes in mortality rates from both extreme cold and extreme heat, found increases in both phenomena. The number of extreme cold events increased to 251 in 1980-2009 from 220 during 1900-1929. This change led to an additional 75 deaths.

Significantly, this study echoed two key findings from the UK article. First, cold weather extremes appear to have increased in frequency over the last century, likely as a result of global warming. Secondly, little evidence exists to suggest that people have adapted to the changing climate. According to the authors of the Stockholm article,

The stable and constant mortality impact of cold and heat over the past three decades, independent of the number of extreme events, shows the difficulties in adapting to changing temperatures…Future changes in the frequency and intensity of heat waves might be of a magnitude large enough to overwhelm the ability of individuals and communities to adapt. The expected increase in the number of elderly and other potentially vulnerable groups, in absolute numbers and as a proportion of the population, could make the impact of temperature extremes on human health even more severe.

In other words, because the vulnerability factors for both cold- and heat-related mortality overlap to such a degree, any decrease in winter mortality due to global warming will likely be offset by a corresponding increase in excess mortality during the summer months. As the authors of the Italian study wrote,

Low-mortality winters may inflate the pool of the elderly susceptible population at risk for dying from high temperature the following summer.

So, to all of the climate deniers or “skeptics” who claim that global warming will somehow be beneficial – I’m looking at you, Congresswoman Blackburn – please take note: climate scientists keep discovering new ways that life is going to get drastically worse, unless we act now to slash carbon emissions and prepare for the warming that’s already locked in.