Ah, the Sunday morning political talk show, a throwback to a simpler time when old, well-connected white guys could get together in a safe space to tell everyone what they’re supposed to think. “Meet the Press” has long been the paragon of this model, sitting at the center of the debate over conventional Beltway wisdom and providing an outlet for John McCain to speak on any and all issues, forever. I’m pretty Senator McCain has his mail delivered to the MTP studio when Congress is in recess.

It is in these hallowed studios where the Very Serious People sit around tables together and decide what issues matter. I’m not sure if these wise oracles read tea leaves or sort through chicken entrails to divine which topics are of import, but they have clearly sent the message that climate change does not fall into that category. In 2013, Sunday talk shows covered the topic for a combined 27 minutes; “Meet the Press” did not spend a single second on it.

So imagine my surprise and excitement when each of the Sunday shows, including MTP, announced that they would devote a portion of shows last weekend to climate change and extreme weather. Maybe they would provide a platform for climate scientists to set the record straight about this incredibly important issue.

And then I saw what Meet the Press was planning to do: 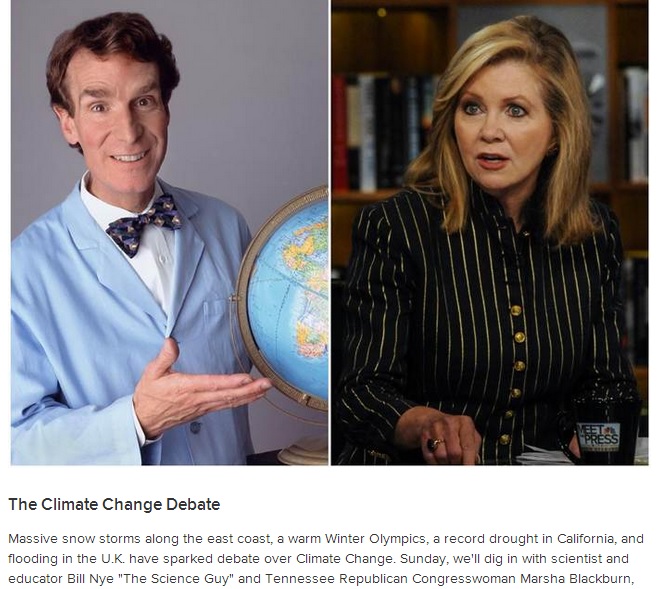 What’s insulting (and insane) is that there is to be a “debate” at all, on one of America’s supposed premier news talk shows. What’s scary is that the side of this debate that is wrong, and that is wrong in a way that will very probably lead to worldwide disaster in a few generations, is taken seriously because it is the side taken by one of America’s two dominant political parties.

Providing equal status to climate deniers constitutes journalistic malpractice. While nonpartisan news outlets and journalists may have a desire to demonstrate their objective bona fides, this decision has real consequences.

In a recent paper, Jesse Shapiro from the University of Chicago examines the relationship between media treatment of climate change and the public’s understanding of the issue. He argues that American journalists often go to great lengths to prove that they are unbiased, which leads them to cover the “debate” around climate change and misinform viewers.

He finds a strong correlation in OECD countries between the percentage of journalists who make it clear that there is strong evidence for the manmade global warming and the likelihood that the general public accepts this consensus view. Accordingly, because American journalists are twice as likely to cling to their objectivity as German journalists, Americans are less informed on climate change than citizens of any other OECD state. 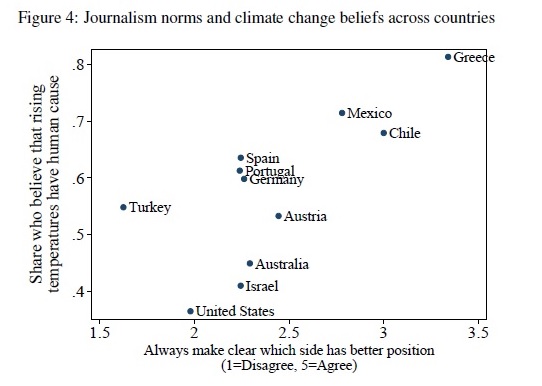 Predictably, this debate quickly devolved into – for the lack of a better term – a total shit show. I loved “Bill Nye the Science Guy” as a kid, but he was completely out of it. Maybe he was tired, as Philip Bump suggested.

Representative Blackburn, on the other hand, was prepared for the segment. She deployed a number of denier tactics, including the single most effective tool that a person defending the wrong side can utilize – rattling off a series of inaccurate statements.

To David Gregory’s credit, he did push back on the Congresswoman, but the entire structure of this faux debate guaranteed that a number of Rep. Blackburn’s lies sat out there without being refuted. As Jay Rosen argued:

Finally, in his self-awareness David Gregory overlooked one big thing. Creating confusion works just fine as a mode of resistance to the scientific consensus he thought he was advancing. (See this study.) Because his Advance the Debate segment required that denialism make an appearance, so that it could be visibly gotten beyond, and because no one on Meet the Press had any intention to stick with the topic long enough to sort out the confusing things Blackburn injected (like the benefits of more carbon) the actual result was an informational mess.

But I was also impressed by the skill with which Rep. Blackburn was able to wield the latest iteration of climate denier arguments. Nathan Young and Aline Coutinho outlined these tactics (paywalled, unfortunately) in the journal Global Environmental Politics last May. In this great article, Young and Coutinho explore how conservative governments in Australia and Canada have utilized “anti-reflexivity” to obfuscate and sow seeds of doubt among the public on climate change. 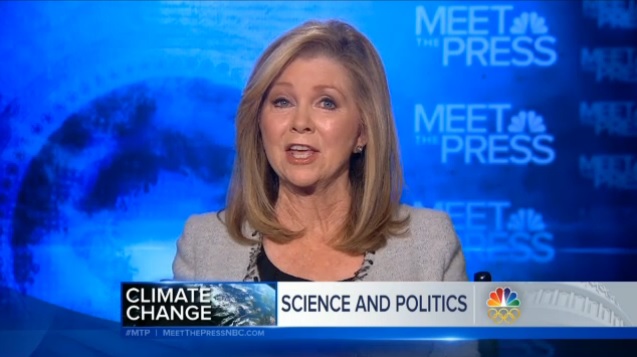 Rep. Marsha Blackburn did an excellent job of demonstrating the “acceptance-rejection approach” of climate denial (courtesy of NBC News).

Anti-reflexivity is the effort “to protect the industrial capitalist order of simple modernization” from threats, primarily through “the dissemination, manipulation, and suppression of knowledge claims.” In other words, those individuals who cling to the fossil fuel-driven status quo attempt to hijack and dictate the research on and public conversation of climate change.

According to Young and Coutinho, however, simply denying the science is not the best way to control the discourse around climate change. They explain that ignorance is not the opposite of knowledge, but an intrinsic part of how “knowing” is formed. Interestingly, people are comfortable remaining largely ignorant on important issues, provided they believe that the institutions responsible for those issues are doing so in a trustworthy manner. As a result,

[R]hetorical acceptance of climate change opens up room for the construction of the “trust bridge” that allows people to be comfortable with non-knowledge.

Paying lip service to the climate consensus makes it easier for deniers to manipulate the public and further the status quo. The authors outline six different “affirmation techniques” that the Howard and Harper administrations have deployed. Impressively, Rep. Blackburn managed to squeeze five of these into the 13-minute debate. Let’s explore them below.

Both the Howard and Harper governments have emphasized the steps they have taken to tackle climate change. In essence, they attempted to co-op environmental arguments. Here’s Rep. Blackburn:

And what we need to be looking at is the way to achieve efficiencies. Carbon emissions are at the lowest they’ve been since 1994. The reason for that is efficiencies.

Climate deniers frequently argue that there exists an inherent conflict between addressing climate change and promoting economic strength. Rep. Blackburn did this over and over and over again. Whether it was her saying that we need to run all environmental regulations through a “cost-benefit analysis” no fewer than five times or dropping this line

Now, you know, when you look at the social cost of carbon, and there is a lot of ambiguity around that, what you also need to be doing is looking at the benefits of carbon and what that has on increased agriculture production. Lot of good study out there about that, lot of good scientists and biologists who have done that study.

Climate deniers love arguing that it doesn’t make sense for the US to act, because doing so won’t reduce carbon emissions from developing countries. They look to export the problem to any number of bogeymen, most often China and India. Cue Marsha Blackburn:

Let’s say everything that Bill says is wrong is wrong. Let’s just say that. Then you say what are you going to do about it? What would the policy be? And will that policy have an impact? Now, even Director McCarthy from the EPA in answering questions from Congressman Pompeo before our committee, said reaching all of the 26 U.S. goals is not going to have an impact globally.

Young and Coutinho emphasize that the Howard and Harper governments have worked aggressively to control what research is done on climate change and how it is communicated. In a similar vein, Rep. Blackburn prefaced her comments by trying to dictate who can and cannot speak on the issue:

And we all know– and I think that Bill would probably agree with this, neither he nor I are a climate scientist. He is an engineer and actor. I am a member of Congress. And what we have to do is look at the information that we get from climate scientists. As you said, there is not agreement around the fact of exactly what is causing this.

According to Young and Coutinho, the Harper and Howard governments have set a variety of numerical targets for climate change in order to establish credibility on the topic publicly. But these numbers often clash, change behind the scenes, or prove to be extremely hollow. Again, Rep. Blackburn used a similar tactic by attempting to mislead with numbers:

Interestingly, it was actually Bill Nye who employed the sixth tactic, appealing to nationalism:

We want to do more with less, and for me, as a guy who grew up in the U.S., I want the U.S. to lead the world in this rather than wait– while you made reference to the United Kingdom, what China is doing with energy production…

Ultimately, this debacle of a debate can hopefully teach climate hawks two important lessons. First, don’t go on television and debate climate change with a denier. The deck is inherently stacked against you, and it will only serve to further misinform the public. Secondly, deniers have begun to subtly shift their tactics, and we need to be ready to counter.

Using these tactics, what Young and Coutinho have dubbed the “acceptance-rejection approach” may prove to be an effective way to forestall action if we’re unprepared. As the researchers conclude:

This, we suggest, is the particular genius of the anti-reflexive stance…If, as this research suggests, many people are willing to be ignorant of certain aspects of the climate change issue as a means of self-protection, then the acceptance-rejection approach provides enough rhetorical comfort to soothe those who are concerned about climate change but unwilling to get deeply involved in the issue.

Just as deniers continue to work to craft new arguments and shift the debate in their favor, so too must climate hawks be vigilant. We’re running out of time to stave off a catastrophe, and we can’t waste it arguing semantics.