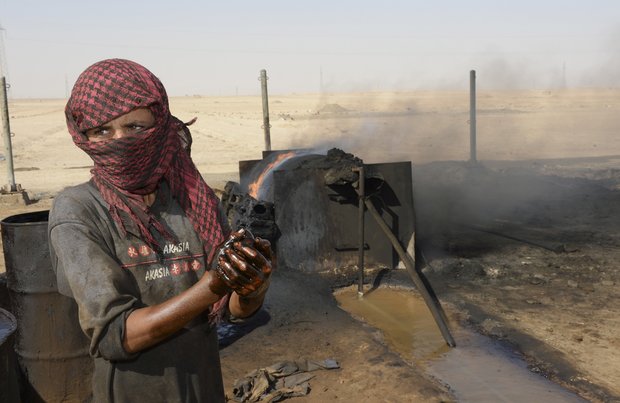 Many Syrians now work in the oil fields of Deir el Zour in order to make a living (courtesy of McClatchy).

The New York Times published an article yesterday that likely raised some eyebrows.

Islamist rebels and extremist groups have seized control of most of Syria’s oil and gas resources, a rare generator of cash in the country’s war-battered economy, and are now using the proceeds to underwrite their fights against one another as well as President Bashar al-Assad, American officials say.

While the oil and gas fields are in serious decline, control of them has bolstered the fortunes of the Islamic State of Iraq and Syria, or ISIS, and the Nusra Front, both of which are offshoots of Al Qaeda. The Islamic State of Iraq and Syria is even selling fuel to the Assad government, lending weight to allegations by opposition leaders that it is secretly working with Damascus to weaken the other rebel groups and discourage international support for their cause.

Needless to say, this is a disconcerting series of events. But the fact that does not make it surprising.

To date, there has been a lot of ink spilled on how natural resources and/or climate change may have contributed to the ongoing civil war. The Center for Climate and Security, probably the best source of information on this subject, has assembled a collection of  more than three dozen such articles. There appears to be a solid case that the combination of an historic drought (likely driven by climate change) and incredibly poor water resource management by the al-Assad regime may have helped sparked the crisis. (It would obviously be excessively reductive and deterministic to claim that climate change caused the conflict, but it likely contributed to it. Anyways, I digress.)

But helping drive the onset of violent conflict constitutes just one of the three major ways that we know natural resources contribute to conflict. Natural resources can help finance ongoing conflict and create incentives for leaders to spoil peace efforts in order to continue profiting from resource rents.

These two connections appear to be quite common facets of modern conflict. We know, for instance, that Charles Taylor funded violence in Liberia by exploiting the illegal timber trade and that both parties in the Angolan civil war financed their war efforts by selling diamonds. Moreover, the ready availability of revenues from opium production in Afghanistan and diamonds in Sierra Leone have provided incentives for warlords and rebel leaders to avoid brokering peace and to finance resumed conflict.

In fact, according to the UN Environment Programme, natural resources have helped to fuel some 40% of all civil conflicts since 1960. Given these realities, it is wholly unsurprising – though no less disconcerting – that rebel groups like ISIS and the Nusra Front have turned to oil reserves in the areas under their control.

There was one new and disturbing piece of information buried in the article, though.

A second American official said that while Mr. Assad’s government is growing ever more desperate for oil, [ISIS] is becoming increasingly independent of wealthy donors in the Persian Gulf and other funding sources. As the group has gained control of more territory, it has been able to sustain its operations through a combination of oil revenues, border tolls, extortion and granary sales, the official said.

As ISIS continues to stuff its war chest with oil rents, it no longer depends as heavily upon its Persian Gulf benefactors. This outcome risks to further exacerbate the brutal nature of the conflict, as ISIS finds itself free of any restrictions that may have previously been attached to its funding (granted, it’s unlikely that these groups would be concerned about the dictates of donors, but they may have, at least, had to deal with practical restrictions due to a lack of resources).

They found that GAM had to rely heavily upon the local population to raise revenues and recruit fighters. This process required GAM to expend a considerable amount of effort and resources; Beardsley & McQuinn note that the relatively meager funds it raised and small number of fighters in its ranks meant that GAM used low return on investment (ROI) methods to finance its rebellion. Accordingly, the group needed to remain attentive to the needs of the Acehnese people, which drove its leaders to the bargaining table after the 2004 Indian Ocean tsunami devastated the region.

LTTE, in contrast, was able to procure funding and recruits much more readily. The group financed its war effort through a combination of extorting payments, controlling business enterprises, and garnering donations from Tamils abroad. These tactics had a much higher ROI and did not require LTTE to consider the needs of the people in conflict-affected areas. As a result, the group was much more willing to engage in violent attacks that either directly harmed Tamils or that garnered retribution on Tamils in return. Additionally, the group saw little incentive in brokering peace after the tsunami, as it had more to gain from ongoing conflict than from international aid flows. The Sri Lankan civil war only ended in 2009 after Colombo brutally suppressed LTTE controlled areas.

So while it should come as no surprise that Syrian rebels, including al Qaeda-linked groups, would turn to oil resources for funding, it should raise red flags. The Syrian civil war isn’t going to end anytime soon, regardless of what happens in Geneva, and this new report suggests that things are only going to get much, much worse long before they improve.