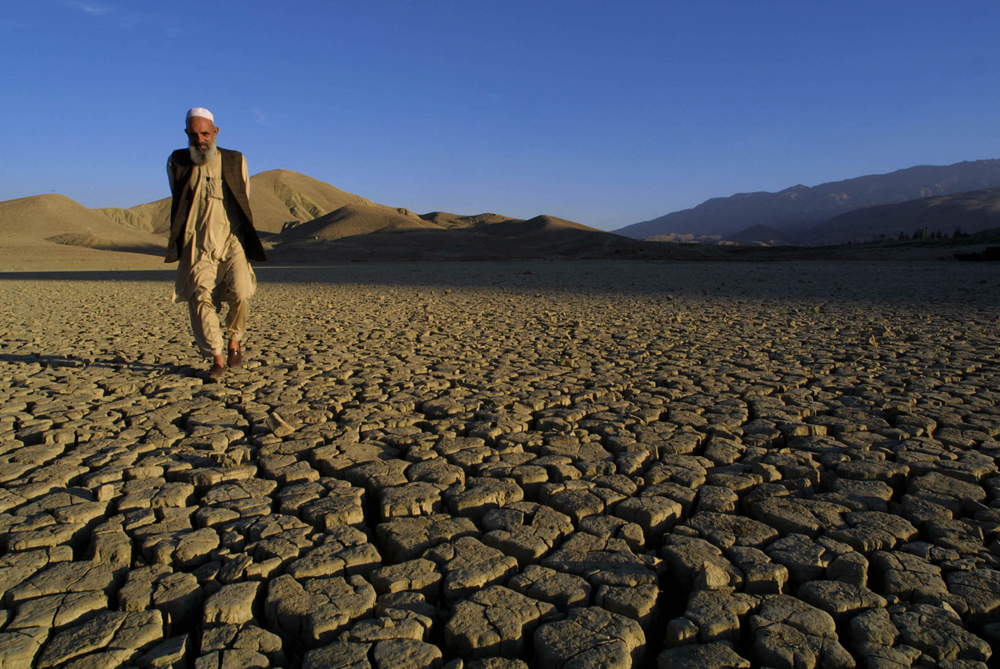 A man walks through the desiccated remains of Hanna Lake in Balochistan, which dried up during a decade-long drought in the region (courtesy of Al Jazeera).

The link between extreme weather and migration remains ambiguous, despite the hype surrounding so-called climate refugees, but new research appears to bolster the connection.

A new study published this week in Nature Climate Change (paywall) explores the effects of different disasters on human migration patterns in rural Pakistan. In light of the severe floods that have affected Pakistan in recent years, particularly the historic 2010 floods that affected 20 million people, the authors focused on the impact that extreme rainfall and temperatures have on patterns of migration in the country. The study examines the relationship over a 21-year period (1991-2012), relying on data from three longitudinal surveys.

The various measures of rainfall have no significant effect on the mobility of men or women, either within or outside of the villages surveyed. In fact, the results suggest that periods of high rainfall actually decrease out-migration within the villages, perhaps due to the fact that farm and non-farm incomes increase significantly during these periods.

These results correspond with previous studies examining the relationship between rainfall and migration. Afifi and Warner examined the influence of 13 different forms of environmental degradation on patterns of international migration. They found that only one of the 13 – flooding – failed to increase international migration flows. In addition, Raleigh, Jordan, and Salehyan (PDF) concluded in 2008 that Bangladeshis affected by flooding migrated just two miles from their homes, on average, and that the vast majority of those displaced returned home shortly after the flood waters receded.

In contrast to flooding, this study did find a robust relationship between extreme heat and out migration flows. The authors note that males in rural Pakistan are 11 times more likely to leave their villages when exposed to extremely high temperatures. These results hold for both land-owners and non-land owners, as well as asset-rich and asset-poor Pakistanis. This outcome likely stems from the fact that extreme heat decreases both farm and non-farm incomes by 36% and 16%, respectively.

The authors also find that both men and women appear far more likely to migrate during periods of both extreme high temperatures and low rainfall. This result indicates that out migration flows are likely to spike during extreme droughts.

While droughts often appear to develop due largely to below-average rainfall, they actually originate through a much more subtle interaction of precipitation and temperature. Less rainfall tends to lower soil moisture levels, which, in turn, increases heat transfer from the soil to the air and elevates surface albedo. These effects drive up temperature further, often creating a positive feedback cycle by which lower rainfall and higher temperatures work together to drive prolonged droughts.

The results of the study have important implications for governments, donor organizations, and NGOs operating in a greenhouse world. As global temperatures continue to rise, we already know that the likelihood of extreme heatwaves will spike dramatically. This outcome will likely increase rural out-migration in the developing world. Moreover, the authors suggest that their work will require donors and aid agencies to reconsider how they respond to and plan for disasters in the future.

Existing flood relief programs may potentially crowd out private coping mechanisms such as migration, particularly for the poor and risk-averse living in flood-prone areas. Our results also show the important role of heat stress — a climate shock which has attracted relatively less relief — in lowering farm and non-farm income and spurring migration. Sustainable development will require policies that enhance adaptation to weather-related risks for farmers and for enterprises tied to the rural economy. Shifting relief towards investments in heat-resistant varieties, producing and disseminating better weather forecasting data and weather insurance, and policies that encourage welfare-enhancing migratory responses might improve individual abilities to adapt to an array of weather-related risks.