Probably the single largest hurdle to negotiating a new global climate change treaty to replace the defunct Kyoto Protocol is the question of culpability for global warming. Determining who caused the crisis and, accordingly, who should shoulder the burden for reducing emissions has been a fly in the ointment since the UN Framework Convention on Climate Change (UNFCCC) was signed in 1992.

During the negotiations over Kyoto, developing states argued, quite effectively, that developed countries must lead the way in emissions reductions, because they took advantage of cheap fossil fuels to drive their economic growth. This debate led to the division of countries into two major groups in the final treaty. Annex 1 countries (OECD members plus “economies in transition,” which were largely former Soviet bloc states) committed to reducing their emissions to varying degrees, while non-Annex 1 countries (developing states) were exempted from making emission reduction commitments.

This distinction outraged many policymakers in the West and all but ensured that the US would never ratify the agreement. Although President Bill Clinton actually signed Kyoto in 1997, the Senate voted 95-0 to endorse the Byrd-Hagel Resolution, which stated that the body would never ratify a treat “unless the protocol or other agreement also mandates new specific scheduled commitments to limit or reduce greenhouse gas emissions for Developing Country Parties within the same compliance.”

Twenty odd years later, the debate continues to linger today. The question of who are the climate change culprits is front and center as the parties to the UNFCCC work to develop a successor treaty by the end of the 2015 Paris Conference. While developed states note that China is now the largest greenhouse gas (GHG) emitter, developing states point out that Western countries and Japan dominate cumulative emissions totals since 1850.

A new study in Environmental Research Letters (open access!) will help to shed some additional light on the discussion, though I imagine it will do little to change the tenor. In the article, the authors aggregate the total greenhouse gas emissions for each country from 1906-2005; using these data, they then attribute to each country its associated proportion of total observed global warming during this period (roughly 0.7°C).

The study is unique because it accounts not only for CO2 emissions from fossil fuel use, but also from land use changes, non-CO2 GHG emissions, and aerosol emissions, which tend to have a cooling effect.

Unsurprisingly, the authors point their fingers at the usual suspects. The top seven emitters – the US, China, Russia, Brazil, India, Germany, and the UK – account for 63% of the observed warming. The US claims the largest share, by far, accounting for 0.1517°C or 21.6% of total warming. Second-place China (which passed the US as the annual emissions leader in 2007), is responsible for 0.063°C, less than half of the US’s share. Overall, the top 20 emitting countries are responsible for 82% of warming.

National contributions to observed global warming from 1906-2005, including emissions from all sources.

While this outcome would appear to bolster the US’s argument, the authors dive further into the data and make the picture murkier. If you just account for fossil fuel use emissions, the list changes significantly. Land use changes, particularly deforestation and agriculture, make up 65% of Brazil’s emissions, while they are responsible for an astounding 86.7% of eighth-place Indonesia’s total contribution.

Moreover, the picture changes dramatically when the authors calculate emissions per capita. As the map below shows, developed states end up bring responsible for a far larger share of total warming than developing states. China and India, for intance, go from second and fourth place on the total warming list to 19th and 20th, respectively, in per capita emissions. The top eight states for per capita warming are all Annex 1 countries, as are eight of the top 10. 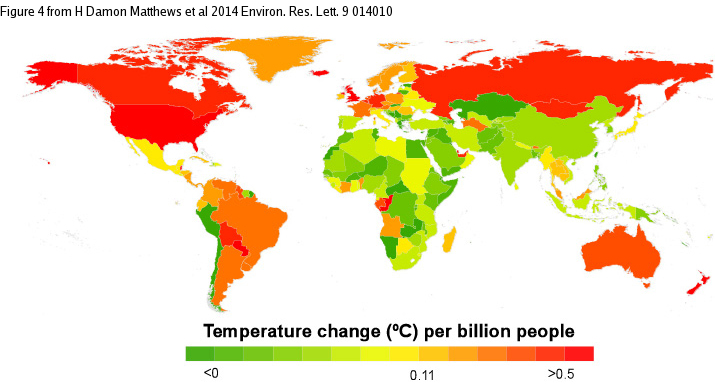 The share of observed global warming for each country on a per capita basis.

The authors devote a considerable amount of attention to the issue of per capita emissions and climate inequality. They note that, in order for us to keep total warming below 2°C in a world with 9 billion people, we would need to maintain per capita warming below 0.22°C. Multiple developed states already significantly exceed this number, emphasizing the importance of reducing their “luxury” emissions to make room for emissions from the developing world. The UK and US produce 0.54°C and 0.51°C of warming per billion people, respectively, which is more than twice the maximum rate the planet can sustain.

The data also do not account for outsourcing of emissions from the developed world to the developing world. The latest draft of the IPCC’s Working Group II report states that, while developing countries have increased their annual emissions to 14 gigatonnes per year, approximately 2 gigatonnes of those emissions stem from producing goods that are exported to the West. Accordingly, the cumulative and per capita share of emissions would change dramatically if we accounted for these trends.

As the authors note,

Balancing the current inequities in per-capita contributions to climate warming across countries may be a fundamental requirement if we are to make the changes necessary to decrease emissions and stabilize global temperatures.

This study will not end the discussion on who must reduce emissions and by how much – far from it. But it does provide further data to inform the debate, and it makes it clear that, despite recent changes in emissions trends, the developed world bears most of the responsibility for our existing climate crisis.

1 thought on “Climate culprits: 7 countries account for more than half of global warming”