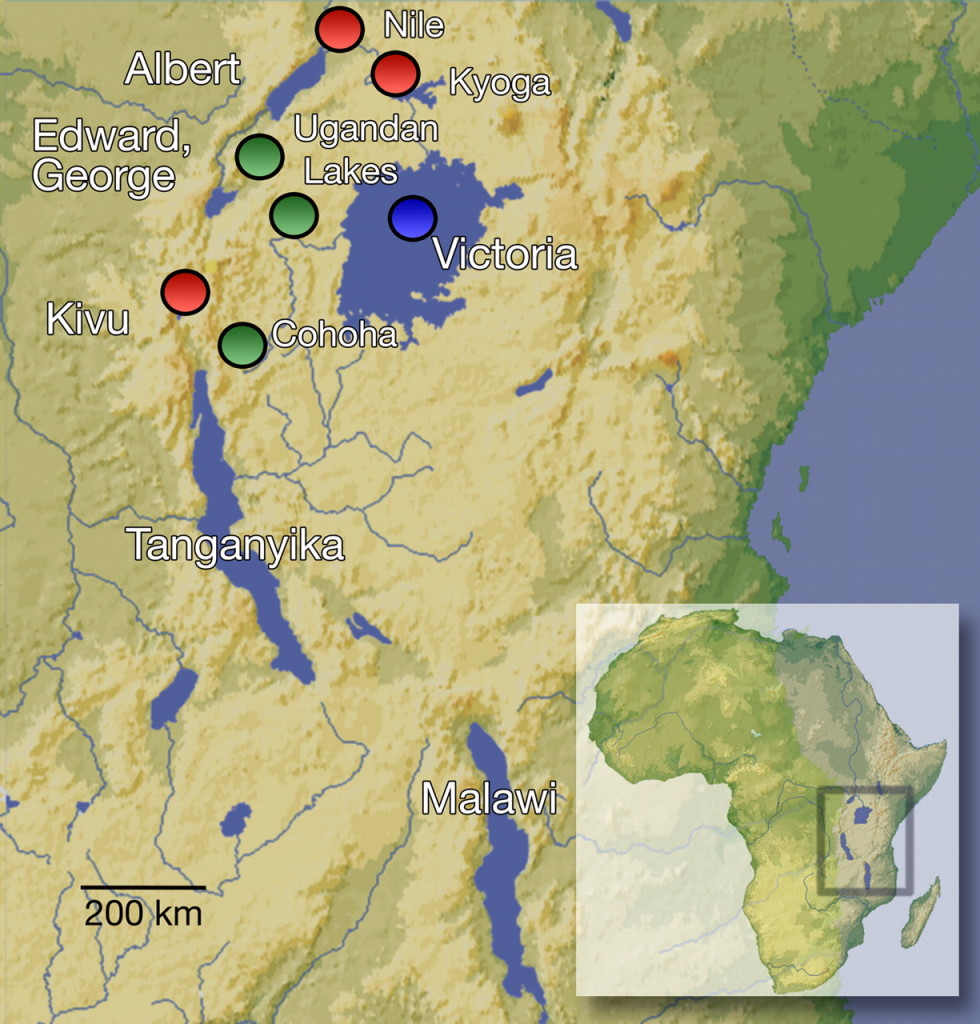 The Great Lakes region of Africa (courtesy of the Proceedings of the National Academy of Science).

If you’ve ever felt inexplicably drawn to Lake Erie or any of the other Great Lakes, you’re not alone. In fact, that attraction is hardwired into your genes.

Last month, two UK researchers published an article titled “Early Human Speciation, Brain Expansion and Dispersal Influenced by African Climate Pulses” in the online, open-source journal PLOS One. The piece explores a variety of close linkages between climatological variability and human evolution throughout Sub-Saharan Africa. It focuses, in particular, on the East Africa Rift System (EARS, for short), which is home to the bodies of water that make up the Great Lakes of Africa.

Africa’s Great Lakes region is home to several of the largest bodies of freshwater in the world. The lake system includes Lakes Victoria, Tanganyika, and Malawi, along with several other smaller bodies of water. These lakes are the lifeblood of the region and are home not only to the world’s largest waterfall, Victoria Falls, but also to the headwaters of the Nile River.

In the article, researchers Susanne Shultz and Mark Maslin sought to determine what factors contributed to the punctuated nature of human speciation and dispersal from East Africa. They focus, in particular, upon a particularly important period for human evolution, which occurred roughly 1.9 million years ago. This period gave rise to the Homo genus and witnessed a series of major migration events from East Africa into Eurasia.

Schultz and Maslin noticed that several of these major “pulses” in human evolution corresponded closely to the appearance and disappearance of the East African Great Lakes. As a result, their research probed this connection more deeply. Their results suggest a close relationship between the growth and decline of the EARS lakes and significant steps forward in human evolution:

Larger brained African hominins colonised Eurasia during periods when extensive lakes in the EARS push them out of Africa. Taken together, this suggests that small steps in brain expansion in Africa may have been driven by regional aridity. In contrast, the great leap forward in early Homo brain size at 1.8 Ma [million years ago] was associated with the novel ecological conditions associated with the appearance and disappearance of deep-freshwater lakes long the whole length of the EARS.

As this article suggests, Africa’s Great Lakes are more than simply natural resources that serve economic, social, political, cultural, and ecological purposes. They are, quite literally, engrained in our DNA. 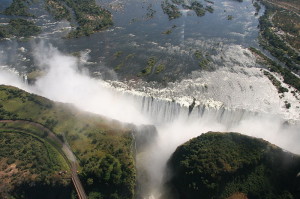 Victoria Falls lie along the border between Zimbabwe and Zambia (courtesy of Wikimedia Commons).

The ongoing conflict in the Democratic Republic of Congo (DRC) has displaced millions, forcing many of them to encroach upon protected areas. In Africa’s oldest park, Virunga National Park, rates of illegal logging have reached 89 hectares (220 acres) per day (PDF). And the Gibe III dam in Ethiopia is drying up Lake Turkana, threatening the livelihoods of tens of thousands of indigenous peoples.

Despite being home to 27% of the world’s freshwater, less than two-thirds of people in the Great Lakes region have access to improved water sources. Climate change is expected to exacerbate this issue even further. The IPCC projects that the total number of Africans facing water stress will climb to 75-250 million by the 2020s and 350-600 million by the 2050s.

But you don’t need to sit by and watch these Great Lakes dry up. Drink Local. Drink Tap., Inc.™ has been working to provide access to clean water for children in Uganda for the last three years. This winter, the organization will undertake three new projects to ensure that the children at St. Bonaventure Primary School and the Family Spirit AIDS orphanage can take advantage of their human right to clean water.

Just as East Africa’s Great Lakes are a part of our DNA, so too is access to clean water and sanitation an integral part of human development. We can all take small steps to ensure that we are protecting this human right for people at home and around the world