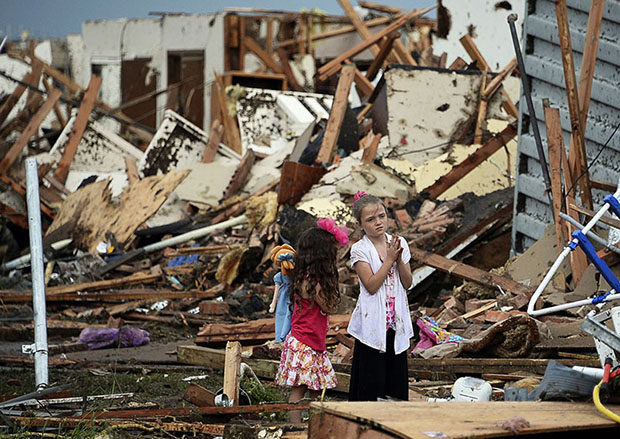 Two girls look over the devastation left by the tornado that struck Moore, Oklahoma in May (courtesy of MSNBC).

My last post drew far more attention that I could have ever imagined. Unsurprisingly, it also garnered criticism, some of which was warranted. First, Typhoon Haiyan’s initial reported death toll of 10,000 appears – thankfully – to have been inflated. As of Monday morning, the Philippines national disaster agency had confirmed that the storm killed 3,976 people, with an additional 1,598 still missing.

Haiyan provides yet another reminder that, in the immediate aftermath of disasters, reports of the number of people killed are almost always wrong. A week after Hurricane Katrina, then-New Orleans Mayor Ray Nagin warned that perhaps 10,000 people had died; the final death toll stood at 1,833. Days after Cyclone Nargis crashed into Burma’s Irrawaddy Delta on May 2, 2008, the AP reported that the storm had killed roughly 350 people. After the floodwaters had receded, Cyclone Nargis emerged as the third most destructive storm in modern history, killing 138,373 Burmese.

Another individual noted that a storm as powerful as Typhoon Haiyan would have caused significant damage anywhere it hit, regardless of the level of development or political situation in the affected areas. This is probably true. Haiyan may have been a once in a lifetime storm. As I noted, some forecasters believe it was the most powerful storm at landfall in recorded history.

Given the fact that less powerful storms have wreaked havoc in significantly more developed parts of the world, it’s hard to imagine that Haiyan would not have become a severe disaster had it hit New York or London or Tokyo. Accordingly, and given the fact that there is no such thing as a “natural” disaster, this may lead you to as what separates a storm from a disaster.

In a word – capacity.

I described the three variables that form disaster risk – a natural hazard, physical and economic exposure, and socioeconomic vulnerability. While these three define the risk that a disaster will occur, there is a fourth variable missing.

The ability of an individual or a community to sustain and overcome the potentially destructive effects of an extreme event ultimately determines whether or not a natural hazard will become a disaster. Individuals with low levels of capacity and high levels of vulnerability often sit on the precipice of disaster on a daily basis. As Wisner et al noted, for marginalized individuals with low levels of social, political, and financial capital, “the boundary between disaster and everyday life can be very thin.” Those of us who can afford health care and homeowner’s insurance may be able to overcome a minor car accident or house fire. For those who lack these assets, such events may constitute life-altering disasters that trap them into a permanent state of emergency.

Vulnerability and capacity are determined by a cumulative set of decisions that can take place over a period of years, if not decades. These decisions are rooted in dominant social structures and ideologies, which unevenly distribute disaster risk among citizens. Anthony Oliver-Smith has described the May 1970 Ancash earthquake that struck Yungay, Peru as a “500 year earthquake (PDF).” By this, he meant the vulnerability to this seismic hazard was borne from the destruction of Incan infrastructure and land use policies that started with the Spanish conquistadors. While the proximate hazards that contributed to the disaster were local, the broader systems in which the disasters occurred grew from a set of structures remote in both space and time which overwhelmed the limited capacity of people in Yungay. 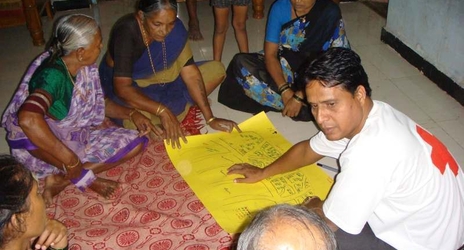 An IFRC staff member conducts a participatory hazard mapping exercise with women in Varap, a village in India’s Maharashtra state (courtesy of the IFRC).

But focusing solely on vulnerability is not an effective strategy for reducing disaster risk. People facing disasters have developed a variety of coping mechanisms and strategies to help them survive. These form the heart of their adaptive capacities, and it is important for development and humanitarian actors to pay attention to these as well. The International Federation of Red Cross & Red Crescent Societies (ICRC) has been central in developing this concept. Its Vulnerability & Capacity Analysis (VCA) tool allows actors to use participatory assessments to identify both the vulnerabilities and capacities of people living in harm’s way. Only through this process can we determine both the risks that must be mitigated and the existing assets that we can build upon.

In the wake of disasters like Haiyan, there exists a window of opportunity during which change can take place. Deluding ourselves by claiming that disasters are natural events only serves to ensure we maintain the status quo. But treating survivors as nothing more than victims who need our help and our solutions is just as dangerous.

People living on the island of Leyte understand the threat of typhoons far better than I ever will. Accordingly, they already had ways to endure them long before Haiyan made landfall. What they need is not for us to bring solutions to them. They need support in identifying what assets they already possess and the resources necessary to build upon and enhance them.