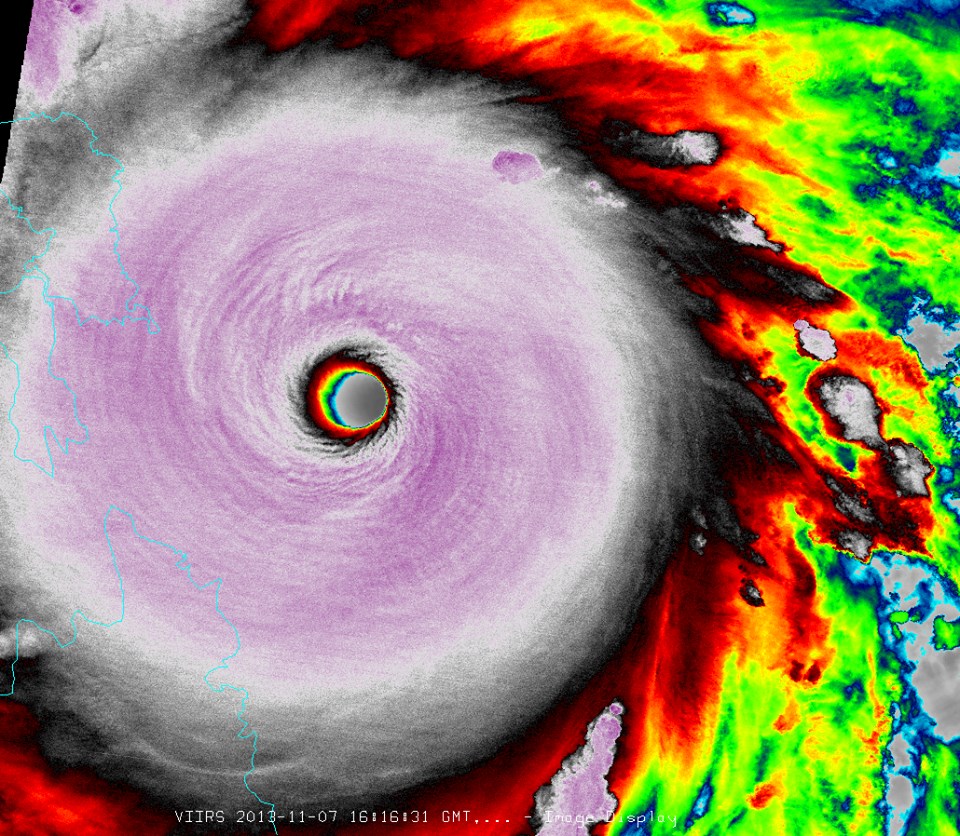 An image of Super Typhoon Haiyan as it appeared the morning of Friday, November 8, just before making landfall in the Philippines (courtesy of the Capital Weather Gang).

As we all know, Super Typhoon Haiyan devastated the Philippines over the weekend. At its peak, Haiyan was perhaps the strongest tropical storm ever recorded at landfall, packing sustained winds of at least 195 mph with gusts of 235 mph. The United Nations and the Philippine Red Cross are both warning that 10,000 people may have been killed in Tacloban alone; this would make Haiyan the deadliest disaster in the history of the Philippines (though President Aquino is revising those numbers down).

I should note, however, that the true scale of a disaster is measured not in the number of dead, but in the number affected and displaced. According to the UN Office for the Coordination of Humanitarian Affairs, Haiyan affected 11.3 million people and displaced at least 673,000 Filipinos. In contrast, the 2004 Indian Ocean tsunami killed perhaps 250,000 people throughout Southern Asia but affected roughly 5 million.

The scope and scale of the devastation in the Philippines is, for lack of a better term, biblical. If you are in a position to provide support, I encourage you to make a monetary donation to the Philippine Red Cross or one of InterAction’s partner organizations working on the ground. Please donate money only. Survivors and relief organizations know what is needed, and they can source materials much more quickly and cheaply from regional sources.

As individuals and media outlets have tried to grasp the sheer scale of the devastation, they have almost unanimously referred to Haiyan as the worst natural disaster in Philippines history. The search term “Haiyan natural disaster” brings back at least 49,300,000 hits on Google, including headlines such as:

Let me be blunt: there is no such thing as a “natural” disaster. Disasters are complex, multifaceted, frequent, and overwhelming. We have a hard time fully grasping the nuance and complexity of each disaster – particularly one that strikes halfway across the world – so we turn to calling it a “natural” event. The term natural disaster is, in essence, a heuristic that we fall back upon in order to interpret the event.

In their landmark work, At Risk: Natural Hazards, People’s Vulnerability, and Disasters, Wisner, Blaikie, Davis, and Cannon term the tendency to view disasters in this light as the “myth of naturalness.” As Comfort et al put it (PDF):

A disaster is widely perceived as an event that is beyond human control; the capricious hand of fate moves against unsuspecting communities creating massive destruction and prompting victims to call for divine support as well as earthly assistance.

But a tropical storm or a tornado does not a disaster make. Rather, the risk of a disaster is a product of three variables: a natural hazard (e.g. a fault line or damaging winds), physical and economic exposure to the hazard, and socioeconomic vulnerability. To borrow liberally once more from Wisner et al:

Disasters happen when hazards hit vulnerable communities whose inherent capacity is not enough to protect itself and easily recover from its damaging effects. Disasters are the product of the social, economic and political environment.

As I tried explaining to a colleague of mine last Spring, Superstorm Sandy in DC was a hazard or an extreme weather event. Superstorm Sandy on the Jersey Shore or in Lower Manhattan was a disaster. Now, granted, most of this difference was due to the severity of the natural hazard as a result of weather dynamics. But Sandy may very well have been a disaster for someone living in a flood zone in Southwest DC (high levels of exposure) or to a homeless person without access to safe shelter from the storm (high levels of exposure and vulnerability).

The Pressure and Release Model, one way to depict the construction of disaster risk (courtesy of Wikipedia).

To their credit, a lot of journalists are starting to get it. Seth Borenstein has an excellent overview today of the social, economic, and political drivers of Haiyan.

Meteorologists point to extreme poverty and huge growth in population — much of it in vulnerable coastal areas with poor construction, including storm shelters that didn’t hold up against Haiyan.

About one-third of Tacloban’s homes have wooden exterior walls. And 1 in 7 homes have grass roofs, according to the census office.

Those factors — especially flimsy construction — were so important that a weaker storm would have still caused almost as much devastation, McNoldy said.

Andy Revkin had a similar analysis of the massive tornado that ravaged Moore, Oklahoma in May over at Dot Earth. But, unfortunately, these types of reports are the exception that proves the rule. Most media coverage falls back upon the “myth of naturalness.” Others obsess over debating whether or not we can attribute each individual disaster to climate change. The science of attribution is improving by leaps and bounds, and perhaps in a year or so, scientists will be able to tell us whether or not they can identify the specific fingerprints of a changed climate in the DNA of Haiyan.

But taking such an all-or-nothing approach to disasters is irresponsible. Every disaster is different, not all natural hazard events are disasters, and whether or not climate change acts through individual extreme events is not the point – it’s our new baseline. Instead, we need to understand that, contrary to conventional wisdom, humans can and do influence all three of the disaster variables. And, as a result, the number of disasters has spiked over the last century. I’ll briefly explore how we have altered each variable below. 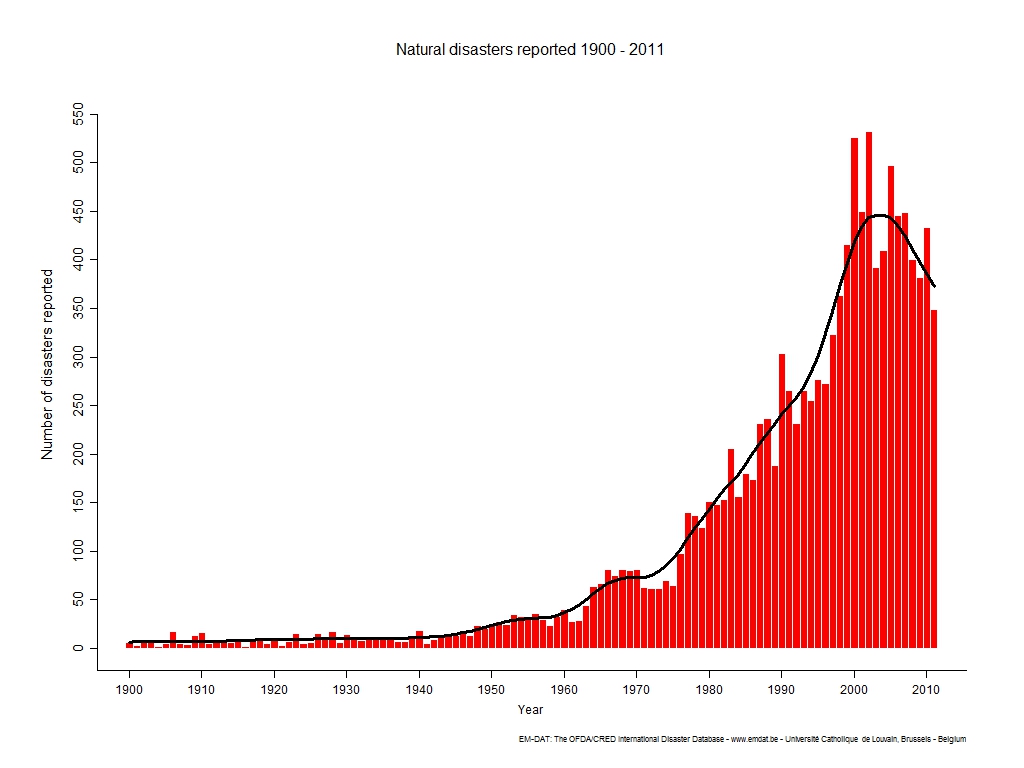 Population and economic growth and rapid urbanization have heightened our exposure to disasters significantly in recent years. According to the UN’s International Strategy for Disaster Reduction (ISDR), the number of people and total GDP exposed to flood risks increased by 28% and 98% (PDF), respectively, from 1990-2007. As economies develop and individuals build fixed assets like homes and infrastructure in disaster-prone areas (e.g. floodplains), economic exposure spikes. At least 3.4 billion people are now exposed to one or more hazards, while 25 million square kilometers of land is hazard-prone.

Rapid and unplanned economic development has taken its toll on ecosystems, which provide vital sources of natural protection against disasters. For instance, despite the fact that intact mangrove forests can reduce the flow rate of tsunamis by up to 90%, at least half of all mangrove forests have disappeared globally. In the Philippines, 70% of mangroves were destroyed (PDF) from 1918-1993. This destruction has substantially increased physical exposure to disasters and reduced the natural environment’s ability to mitigate the risk.

Of the three disaster variables, vulnerability is the most closely linked to the social, economic, and political environments. By definition, some groups appear more vulnerable to disaster risks than others. Key intervening variables include class, occupation, caste, ethnicity, gender, disability, physical and psychological health, age, immigration status, and social networks. One’s ability to access the resources s/he needs to cope with and adapt to stress – their “architecture of entitlements” (paywall) – is determined by these various factors, which shape social relations, political contexts, and structures of domination.

Differential vulnerability helps to ensure that different individuals and groups weather (no pun intended) disasters better than others. During the 2004 Indian Ocean tsunami, for instance, women were three to four times more likely to die than men in affected areas. This outcome occurred for a variety of reasons. Due to cultural norms, most women wore bulky clothing that covered most of their bodies; when this got wet, it weighed them down. Women were also far less likely to be able to swim (PDF) given their social roles and religious mores.

Interestingly, even natural hazards –the most natural of the three variables – have also undergone changes due to human actions.  Global temperatures have increased 0.85°C since 1880. Since the 1970s, global average precipitation has decreased by 10cm per year, but it has increased by more than 20% in certain regions (including the Northeast and Midwestern US). Accordingly, the number of extreme events associated with climate change rose by 50% over this three decade period. There even appears to be evidence that human activities can alter seismic risks. Researchers have connected a string of earthquakes in states from Ohio to Oklahoma to the high-pressure injection of wastewater into underground wells.

While it is difficult for reporters on a deadline to analyze the social, economic, and political drivers of various disasters, it is important that we begin to inch away from the myth of naturalness. Placing the blame for every disaster on the “capricious hand” of God or nature is dangerous and irresponsible.

First, it strips robs disaster survivors of their agency. They are just poor victims suffering from Acts of God. Secondly, in places where disasters are common (like the Philippines) it allows people who are disconnected from the events to blame the victims for not moving away from the threat. Thirdly – and perhaps most importantly – this mindset tends to make us complacent. If we accept disasters as natural events that we cannot control, what is our incentive to invest in disaster risk reduction strategies like curbing poverty, replanting mangrove forests, or hardening critical infrastructure? What is the hook for curbing carbon emissions to mitigate climate change?

The first step to addressing the rise in disasters worldwide is to admit that disasters aren’t natural. They’re manmade. Maybe if we do that we can get off our asses and do something about them.