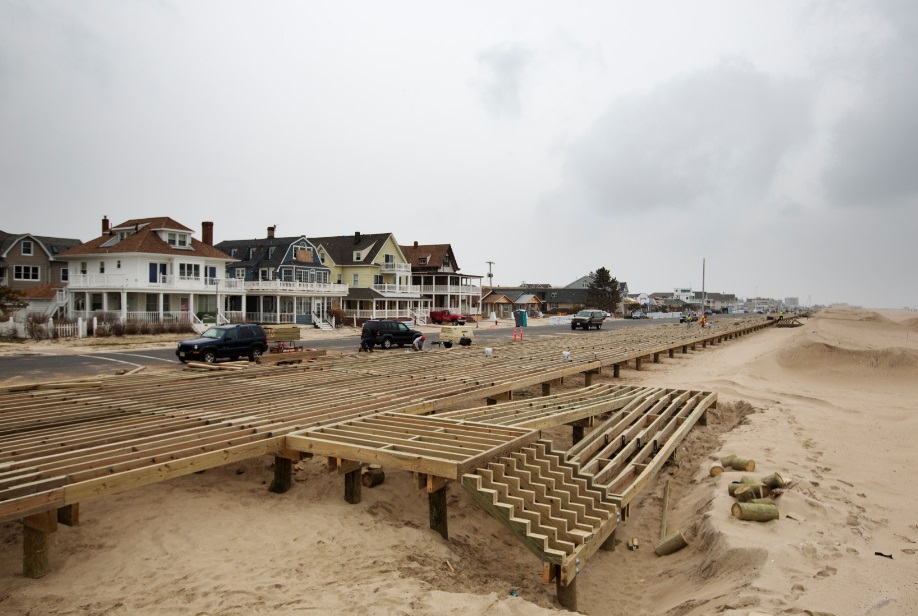 Workers rebuild the boardwalk in Bay Head, New Jersey. The boardwalk was badly damaged by Superstorm Sandy (courtesy of The Atlantic Cities).

Over at The Atlantic Cities, Prof. Harvey Moltoch has a good piece titled “Why Residents of Disaster-Prone Areas Don’t Move.” In it, he discusses some of the economic and emotional reasons why people choose to stay in vulnerable areas, even after suffering the devastating effects of disasters like Superstorm Sandy.

Consider, for example, that people are consumers of space in ways that go beyond having houses, apartments, back-yard gardens, and a place for the RV. They have friends, family and obligations nearby. Location, especially residential location, is the node around which people manage life with routines, like having specific shopping habits close to home. Even when they can be financially “made whole” in an offer to retreat, residents may not want the deal. Hence there are “hold-outs” who resist even robust financial inducements. Private developers trying to assemble large parcels know this all too well: people often want to remain for reasons that money can’t overcome.

Given the recent string of disasters that have occurred in the last few weeks – including earthquakes in Pakistan and the Philippines and massive tropical storms in China, India, and Japan – it is logical that people would want to understand the motives of those who choose to remain in harm’s way, despite the inherent risks; this is particularly true, given that each of these areas has been hit by similar destructive disasters in the past.

While Prof. Moltoch’s post provides valuable insight into this issue, it ignores a lot of other key factors that play into the decision. Moreover, it is largely applicable only to the developed world. What may seem economically rational to a person living in the Korail slum of Dhaka does not necessarily comport to Western standards, and vice versa.

In many areas, government regulations and economic structures may create incentives for individuals and businesses to build in these high risk areas. Both the presence of certain initiatives – like the heavily indebted federal flood insurance program – and the absence of others – such as a requirement to incorporate climate change projections into infrastructure planning – can incentivize people to build in areas where, if externalities were properly accounted for, it would not make economic sense for development.

One can understand the reticence of taxpayers to effectively subsidize such unsustainable development projects. Accordingly, it’s not surprising to see people make comments like “we ALL pay for their stupidity to remain in place,” which one person said in response to Prof. Moltoch’s piece. Yet, this mindset ignores the fact that, for many people (particularly in the developing world), staying in disaster-prone areas is actually the rational decision.

Given the threats posed by climate change, particularly that of sea level rise for low-lying areas, it’s common to hear about the need to resettle large populations of people from, say, Kiribati or Bangladesh. Yet, as we frequently see with resettlement programs related to large-scale development projects, people often find themselves worse off than before. The Hirakud dam, India’s first mega-dam, was completed more than 60 years ago; despite this fact, at least 10,000 people affected by the project still have not been rehabilitated fully.

While moving people from disaster-prone areas may minimize their physical vulnerability, it frequently maximizes their social vulnerability and sense of dislocation (PDF). Following major droughts in the 1980s, for instance, the Ethiopian government launched a large-scale, forced resettlement program of famine-affected households. The effort proved to be a catastrophe, and it soon turned into a state-sponsored disaster of its own.

Two vital forms of capital upon which people can draw to enhance their resilience to disasters are a familiarity with the climate/environment and social networks. Forced relocation can upset each of these in significant ways. Following massive flooding on the Zambeze and Limpopo Rivers in 2001 and 2007, the Mozambican government resettled a large number of people (PDF) from the affected flood plains. Unfortunately, these flood-safe regions suffer from recurrent drought; accordingly, many of the people who were resettled actually returned to the flood-prone areas after the disaster ended.

Moreover, forced relocation frequently breaks social bonds and interferes with various forms of social capital, leaving individuals highly vulnerable and prone to exploitation. After Hurricane Katrina, the rate of rape among women living in FEMA trailer camps was 53.6 times higher (PDF) than the rate before the storm. There is also ample evidence that Cambodian and Vietnamese families forced to migrate from their homes have sold their daughters into the sex trade (PDF) in order to generate income.

Lastly, particularly in urban areas, it is essential for poor households to have ready access to economic opportunities. Yet, the majority of formal land that the urban poor can afford is located within the peri-urban fringe, far from the urban core. Accordingly, most poor households will opt to live in marginal areas closer to the city center in order to have easier access to the economic resources upon which their livelihoods depend. This create situations in which slums develop in highly vulnerable, disaster-prone areas, such as the Annawadi slum of Mumbai that Katerine Boo chronicles in Beyond the Beautiful Forevers. 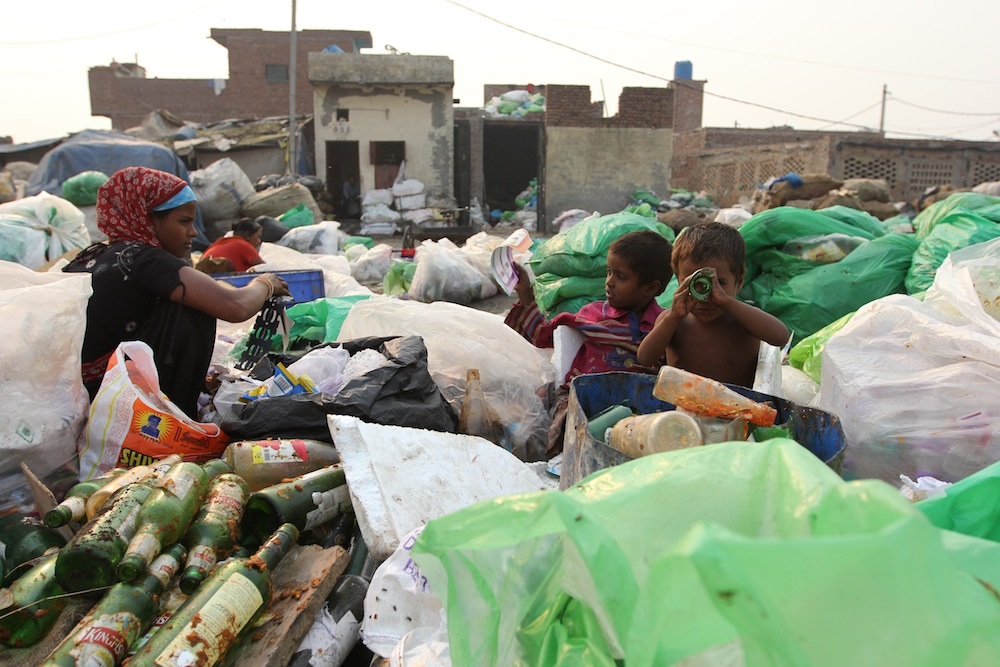 Two young Indian boys play with items they found in a garbage pile, while their mother sorts through the waste. In India, people who sort and sell trash for a living – an incredibly important job in a country with poor solid waste management – are overwhelmingly from low castes and are commonly known as “ragpickers” (courtesy of Don’t Waste People).

So the next time that you want to criticize someone for living in the low-lying areas of New Orleans or in Orissa state in India, remember that there’s a good chance that such people are making a perfectly rational decision, based upon their limited options.