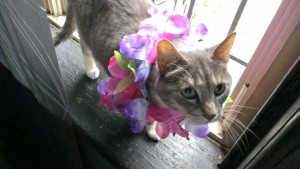 Snowball is ready for when Cleveland’s climate becomes more tropical.

For the most part, it would appear that Cleveland is poised to cope relatively well with the effects of climate change. When The Nature Conservancy developed a list of the cities which will be best positioned to adapt to climate change; Cleveland ranked first. Grist did a similar piece back in May, and it placed Cleveland 6th on a list of the 10 “best cities to ride out hot times.”

Without question, Cleveland has a lot of assets that will help it deal with climate change. First, Lake Erie. Unlike other water-stressed cities which will suffer from the crippling effects of drought and water shortages, Cleveland has ample water resources thanks to Lake Erie and our various rivers. And as a result of the Great Lakes Compact, we can be relatively sure that our freshwater resources cannot be diverted to other areas.

Secondly, Cleveland is (largely) immune to many types of disasters. Sure, we get a lot of snow (not as much as, say, Syracuse), and our skies are as gray as our steel 6 months per year, but we don’t have to fear hurricanes, wildfires, earthquakes (unless you live near Youngstown), or tornadoes (for the most part). Trulia lists Cleveland as the 2nd best place to live if you want to avoid disasters; our sister city to the south, Akron, came in at 4th.

All of this good news can lead some people in the region to get cocky (see cartoon below) and assume that Clevelanders will be sitting pretty in a greenhouse world. But let’s not get ahead of ourselves – climate change will still suck for Cleveland; it will just suck less, relative to other locations.

This cartoon appeared on Cleveland.com on July 8. While it’s certainly true that Baby Boomers have fled Cleveland in droves for cities that only exist due to the air conditioning & Manhattan financiers have screwed our city over, it won’t be they who suffer the most from climate change. It will be the poor, elderly, disabled, and persons of color (courtesy of Cleveland.com).

I’ve already explored how changing temperature and precipitation patters will likely affect the levels of the Great Lakes and algal blooms in Lake Erie. But I also want to hone in on one risk that a lot of people in the region appear to overlook – the risk of increasing heat-related mortality in Greater Cleveland.

Now, I know what you’re thinking – heat-related mortality in Cleveland?! Winter lasts 6 months per year! Our average annual temperature is a whopping 49.6 degrees, and the thermometer dips below the freezing point 122 days a year. All that’s true, and that’s actually part of the issue. Heat-related mortality risk is a combination of two sets of factors – environmental and socioeconomic (which I explore in my next post).

Recently, Environmental Research Letters published a peer-reviewed article that explored how climate change will drastically increase extreme heatwaves globally. According to the authors, severe heat waves, those which fall at least 3 standard deviations above the mean (so-called 3-sigma events), will quadruple from affecting roughly 5% of the world’s land area to around 20% by 2040. More disturbingly, the models project that 5-sigma events, which are “now essentially absent” could cover 60% of land area by 2100 (under a high emissions scenario). In other words, we risk entering an entirely new climate reality, in which ever-increasing parts of the Earth may become uninhabitable.

Now, some people in Cleveland other northern climates may brush this off, believing that shorter, milder winters are somehow a blessing for the region (“Now we can swim any day in November,” as The Postal Service put it).

But let’s not get ahead of ourselves. According to the Union of Concerned Scientists (PDF), the number of days with temperatures at or above 90°F in Cleveland will likely climb from an historical average of just 9 to 61 by the end of the century, under a high emissions scenario. More disturbingly, the city is projected to endure 21 days in excess of 100°F by 2100, a situation which could be catastrophic for public health in the city. 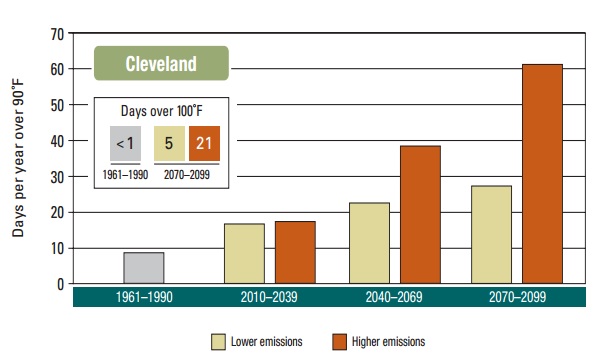 The number of days above 90°F and 100°F in Cleveland under low and high emissions scenarios (courtesy of the Union of Concerned Scientists).

We already know that such extreme heat waves can be deadly. The 2003 European heat wave was ultimately connected to the deaths of as many as 70,000 people. Such extreme heat waves are becoming more common and will continue to increase in frequency. According to the World Meteorological Organization, heat-related mortality jumped by more than 2000% during the last decade. Moreover, a 2011 study from Vorhees and colleagues, published in 2011, projected that, as a whole, there will be an additional 21,000-27,000 heat-related deaths (paywalled) per year in the US by 2050 due to climate change. 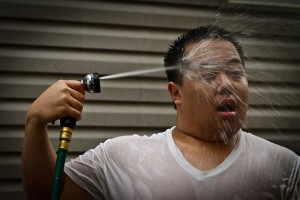 Many of these deaths will likely occur in cities like Cleveland, Chicago, and Cincinnati, which are not currently equipped to handle extreme heat. Because they do not have to deal with such high temperatures on a regular basis, most people in Cleveland and other related cities have not become acclimatized to deal with significant heat waves. Air conditioning use is not nearly as prevalent as it is in Sun Belt cities, and municipal governments are unlikely to have sophisticated systems in place to help residents cope.

Scott Sheridan, a geographer at Kent State University (and, coincidentally, the program director of my semester in Geneva, Switzerland) published a study in 2011 that looked at the role of acclimatization and heat-related mortality in California. While the study predicts that morality rates will spike in most of California’s cities, Sheridan notes that acclimatization can help reduce these rates by 37-56%.

Such reductions are likely to occur in cities that are used to extreme heat, like Los Angeles, but not necessarily in places like Cleveland with much milder climates. Accordingly, while Cleveland’s relatively cool climate and mild summers will provide a buffer against the punishing heat that’s likely headed for the Southwest and Plains states, it may, ironically, leave the city more vulnerable to extreme heat waves. Such radical changes will almost certainly undermine people’s coping strategies, which they’ve developed over decades of living in a fairly stable climatic regime.

But, as I noted, the climate is just one of two factors that determine the impact of heat waves on mortality rates; the other is socioeconomic (and political). I will explore those issues in my next post.