Recently, Dr. Ilan Kelman of the Center for International Climate and Environmental Research in Oslo posted my paper on the political dynamics of Cyclone Nargis on his website about disaster diplomacy. I appreciate his willingness to publish my work, and I hope it contributes to the development of disaster diplomacy as a field. 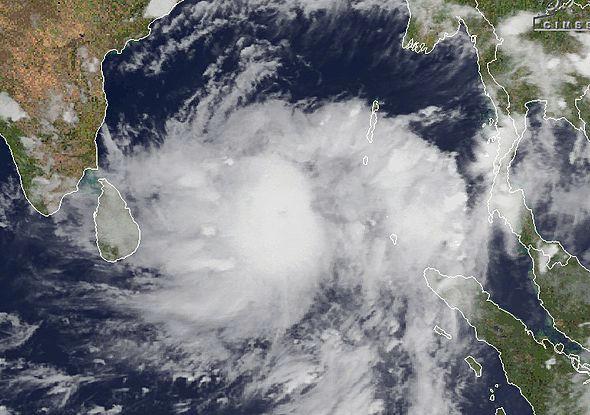 Cyclone Mahasen as it looked, forming in the Bay of Bengal on May 12 (courtesy of CNN iReport).

Coincidentally, the publication of the paper happened just as Cyclone Mahasen was coming ashore from the Bay of Bengal into eastern Bangladesh and western Burma. The center of the storm was located near Chittagong, Bangladesh’s second largest city. Fortunately, the storm weakened from a category 1 cyclone to a tropical storm before it made landfall, reducing its potential impact. That said, even the weakened storm killed at least 75 people in the affected areas, rendered thousands of people homeless, and damaged crops. Its impact was clearly less devastating than other recent cyclones, including Nargis (which killed more than 130,000 Burmese in May 2008) and Sidr (which killed 3,500 people in Bangladesh during 2007, after passing through the Sundarbans Mangrove Forest).

Similar to Nargis, however, Cyclone Mahasen highlighted the ongoing political rifts within Burma. In this patchwork state, composed of more than 100 ethnic groups lumped together by the British, ethnic hostilities and rebellions have been endemic. The Uppsala Conflict Encyclopedia lists at least 10 different conflicts between separatist ethnic groups and the Burmese government.

Fortunately, the new government in Burma, which replaced the ruling military junta in March 2011 has worked to settle many of these conflicts, signing a rash of ceasefires and peace agreements. One lingering ethnic challenge which has actually gotten worse since this point, however, involves the minority Rohingya people. The Rohingya, a group comprised of at least one million ethnic Muslims, have experienced severe and ongoing repression within Burma.

The Burmese constitution, which supposedly celebrates the country’s ethnic diversity, does not acknowledge the Rohingya. Despite the fact that at least 800,000 Rohingya live in Rakhine state, they are officially stateless persons, according to the Burmese government. Around 140,000-200,000 Rohingya live in displacement camps in Rakhine, where they struggle to provide for their basic needs. Additionally, they live under constant fear of violent repression by radical Buddhists in Burma, who view them as invaders and threats to Burmese identity. Many of the same monks who were trumpeted by the West for their role standing up to the junta in the 2007 Saffron Revolution have denounced Rohingya and/or led attacks against them. 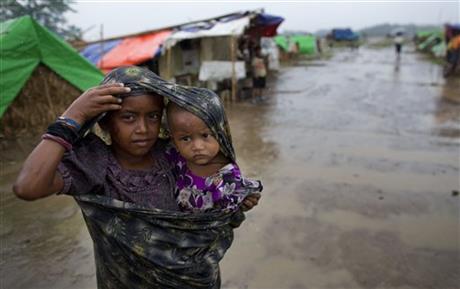 A young Rohingya girl and her sibling brace for Cyclone Mahasen in an IDP camp in Rakhine state (courtesy of the Los Angeles Times).

Given this recent history of ethnic violence, it is unsurprising that many Rohingya resisted efforts to relocate them in the wake of Cyclone Mahasen. Fortunately, the storm appears to have largely spared Rakhine and will leave nothing like the trail of devastation from Nargis. However, the disaster and the political issues surrounding it did generate casualties. At least 100 Rohingya crammed onto small boats in the Bay of Bengal as the storm approached, attempting to find refuge in Bangladesh (which refuses to provide asylum to most Rohingya). Tragically, several of these boats sank off the Rakhine coast in the days before the storm, killing an unknown number of people.

This story demonstrates, once again, the fact that disasters are far from “natural” events. As Brad Adams, the Asia director at Human Rights Watch, told the BBC, “any disaster that results [from Mahasen] will not be natural but man-made.” The vulnerability and physical exposure of Rohingya people to Cyclone Mahasen were the products of the social and political environments. They were intentionally constructed by people in power.

This “myth of naturalness” creates the impression that disasters are all acts of God that are beyond human capacity to manage. This perception is largely false and provides cover for malevolent actors, like the military junta in Burma, to deflect from their own actions. Disaster are political events, and they demand political responses. The Burmese people cannot hope to enjoy peace, stability, and development if its state continues to formally repress and marginalize the Rohingya.