My last post on environmental refugees generated a bit of conversation and discussion on Twitter, and it garnered some push back from other activists (as I had hoped). Additionally, I unknowingly posted it at an opportune time for this discussion, as The Guardian has just launched its excellent series on the effects of climate change on communities in Alaska.

The series begins with a discussion of the threat posed to Newtok, as the river that surrounds it on all sides continually erodes the land upon which the town is built at a startling pace. As the author notes:

A federal government report found more than 180 other native Alaskan villages – or 86% of all native communities – were at risk because of climate change. In the case of Newtok, those effects were potentially life threatening. 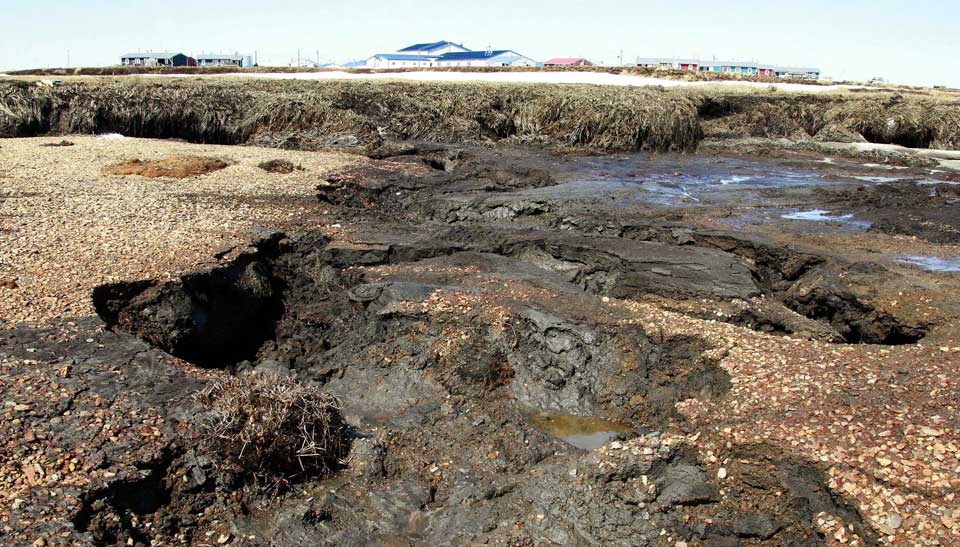 Evidence of the significant, ongoing land erosion that threatens the town of Newtok, Alaska (courtesy of The Guardian).

Interestingly, though perhaps unsurprisingly, The Guardian opted to title this series “America’s Climate Refugees.” Now, before I get into my argument, let me make a few disclaimers. I find the plight of people living in such Arctic communities to be horrific, and I find the unwillingness or inability of the United States government to address the threats to their livelihoods, culture, and personal security to be shameful. As I noted in my last post, I believe climate change represents the single largest environmental injustice ever enacted upon vulnerable people in history. The fact that the physical and cultural survival of peoples is threatened by anthropogenic changes to our atmosphere is, without question, a fundamental human rights issue. I fully support the effort by the Inuit Circumpolar Council to push for redress (PDF) over climate change to the Inter-American Commission on Human Rights, despite (and perhaps more so because of) the Commission’s refusal of their petition.

That said, I find it odd that The Guardian would seek to couch a discussion over climate refugees in this particular case study. It’s a tragic story that absolutely demands action. But it’s not a case of climate refugees by a long shot. In order to be a refugee, an individual needs to cross an international border and fear reprisal from his/her host government or another group should s/he return. The Alaskan communities in question have not, to my knowledge, migrated into Canada from fear of the US government or fellow Alaskans. On the contrary, they have received (woefully inadequate) technical and financial support from the US government, particularly the Army Corps of Engineers, to relocate their village.

As the article notes, Newtok residents developed a plan to move their village approximately nine miles away to higher ground. This plan lines up closely with evidence from other groups displaced by environmental events and/or disasters. As I discuss in my paper on climate change and national security:

Environmental migration follows a distinct pattern: it is largely internal, temporary, and nearby. Migrants moved an average of two miles in response to flooding in Bangladesh, and the vast majority returned shortly after the disaster had dissipated.

Now, that is not to say that all migrants relocated to nearby communities or returned to their homes. Approximately 10-25% of migrants permanently relocated, most of whom moved into Dhaka. Moreover, research does suggest (PDF) that nearly all types of environmental disasters create international migration flows. But that’s not what is occurring in this Alaska case. The suffering of innocent Alaskan communities at the hands of our fossil fuel-based economic is no less important than that of people living on small island states in the Pacific Ocean. But that does not mean that they are “climate refugees.” 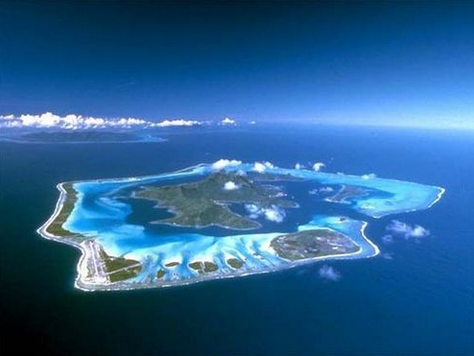 One of the more than 2,000 islands in the Maldives that face inundation from projected sea level rise (courtesy of the Intellectualist).

Another one of the threads running through the push back I got on Twitter dealt with the fact that people displaced by environmental and climatic changes defy the current definition of refugees, IDPs, etc. I would generally agree with that argument, and I think most international migration scholars (of which I am not one) think that the current paradigm needs to change to better reflect current realities.

But we also need to consider the moral issues involved in creating a special protected class in international law for people displaced by climate change. The single largest source of displacement globally is violence/conflict. The IFRC estimates that 10.4 million refugees and 26.4 million IDPs fled violence/conflict in 2011, adding to the 43 million total who have left their homes from these threats over the years. If we provide a special, internationally recognized status for people forcibly displaced by climate change, what does that mean for the millions already displaced by violent conflict? Is an IDP in Sudan, who lives under the constant threat of violence, somehow less worthy of protection and support than someone displaced by groundwater salination in the Maldives?

And what of the 43 million people who have been forcibly displaced and relocated by large-scale development projects, including big dams and mines, worldwide? The vast majority of these people have not received adequate relocation and livelihoods support, and they are highly vulnerable to the looming impacts of climate change. Should they only be eligible for special protection after they have been displaced again by sea level rise?

The plight of marginalized communities facing the effects of conflict, disasters, and climate change is what keeps me up at night. It’s what I devoted my entire graduate school education and my Master’s thesis to. Marginalized people displaced by climate change, whether in the developing or developed world, are absolutely entitled to financial and, I would argue, legal retribution. But we need to be mindful about the potential consequences of our proposals to address these issues. It has taken more than 60 years to get our addled, ineffective international refugee system to where it is today. We need to be very careful about throwing out the baby with the rising bathwater.

3 thoughts on “More on the environmental/climate refugee question”