UPDATE (4/3/13 at 1:08pm): The New York Times ran a piece this morning reporting that the Obama administration has proposed changing the US food aid system to purchase crops from local producers, as I suggested below. While this change faces major opposition from big agribusiness and shipping interests, it would be a major feather in the cap for the President, and I commend his effort.

Recently, the Center for American Program released a report that traced the connection between climate change and the Arab Spring. It illustrated how a volatile mix of extreme weather, reduced food production, and food price spikes contributed to the instability that ripped through the Middle East and North Africa (MENA) in 2011. Following a rash of extreme weather events, including severe drought and wildfires in Russia & Ukraine – which scientists have connected to climate change – the price of wheat jumped from just $4 per bushel in July 2010 to nearly $9 by February 2011. For the average Egyptian family, which spends 40% of its income on food, watching the price of food stuffs increase by up to ten-fold was too much to bear. Egyptians marched through the streets carrying loaves of bread and demanding the end of the Mubarak regime. 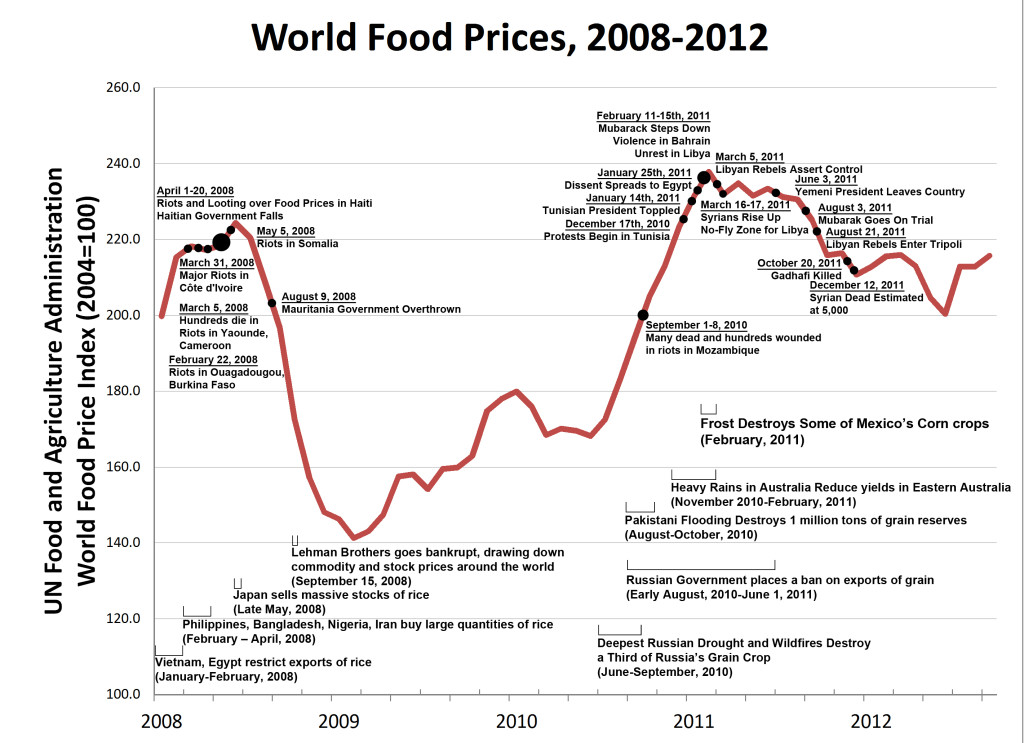 The Arab Spring is far from the only time that food price spikes have driven instability and revolt, however. Food riots destabilized Haiti in 2008, while the Tortilla Crisis rocked Mexico in 2007. The violent response by Liberia’s Tolbert regime to rice riots in1979 contributed to Samuel Doe’s coup the following year.

Given this clear link between food shocks and domestic instability, it will be vital to address food security concerns in a greenhouse world. IFPRI projects that food prices will rise across the board through 2050, with increases up to 100.7% for maize. Research suggests that climate change could significantly reduce crop yields  in Sub-Saharan Africa by 22%. The US is suffering from an historic drought, which affected 80% of farmland and reduced grain yields by 8%. Globally, grain consumption has exceeded production in 8 of the last 13 years. This trend is likely to worsen in the future, particularly as China increases its grain imports; research suggests Chinese grain yields could decrease by 37% in the coming decades. 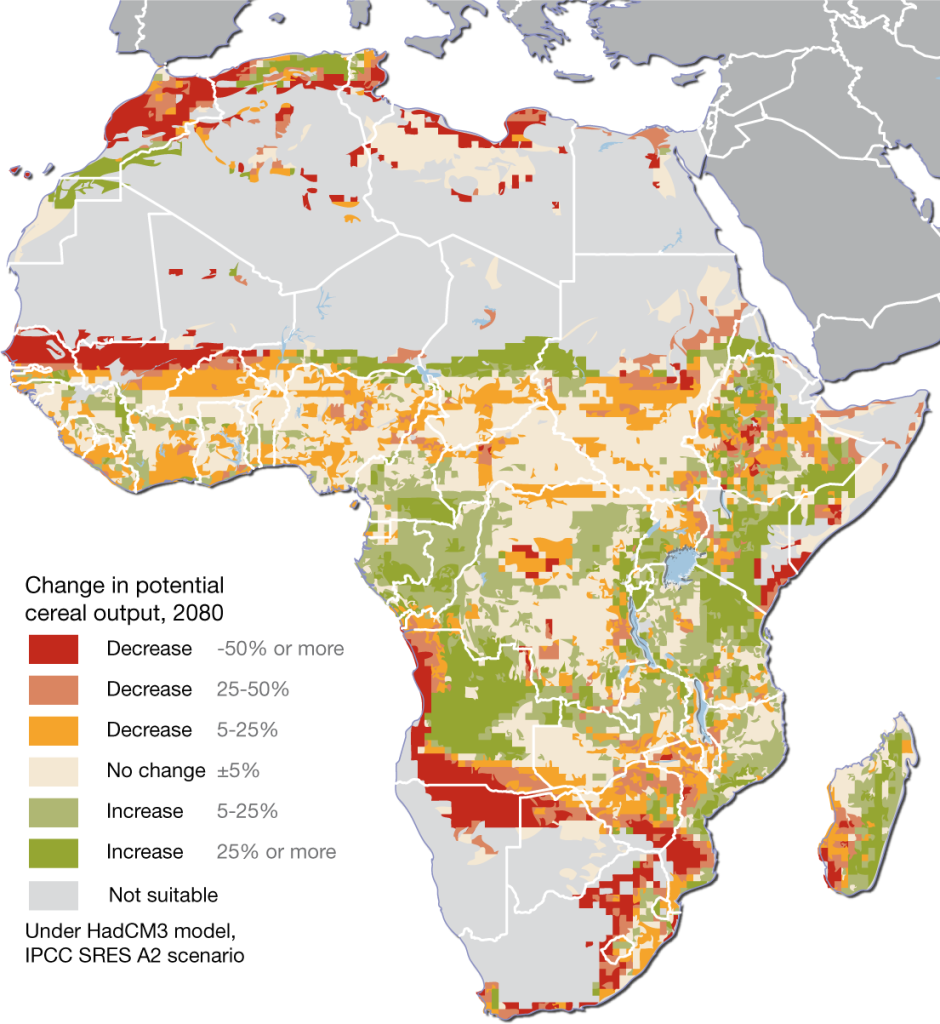 Projected changes to cereal productivity, due to climate change, through 2080 (courtesy of UNEP/GRID Arendal).

In his inaugural address, President Obama said he “will respond to the threat of climate change, knowing that failure to do so would betray our children and future generations.” To live up to this statement, the President should use his second term to tackle the climate-food insecurity nexus by leading on international climate negotiations and reforming US food policy.

First, the President and Secretary of State John Kerry must work proactively with the leaders of developed countries, India, and China to meet their commitment to craft a legally-binding international climate treaty by 2015. Secondly, the President must coordinate with our OECD partners to fulfill their 2009 pledge to provide $100 billion per year to tackle climate change in the developing world. A portion of these funds should finance climate-resilient agriculture for smallholder farmers. This investment should promote proven agricultural tactics, including agroforestry and regional seed banks.

Thirdly, the President should begin a conversation to change the face of US farm policy. Currently, inefficient farm subsidies in the US and the European Union encourage wasteful and otherwise noncompetitive practices. Western governments spend $2.50 per day in subsidies on each head of cattle, compared to just $0.90 per day for children in the developing world. Additionally, Western farm subsidies allow farmers to produce commodity crops at below-market prices; in turn, Western governments dump this surplus crop on the world market, undercutting farmers in the developing world. President Obama should use the negotiations with the EU over the proposed trans-Atlantic free trade zone to reform these harmful subsidies. 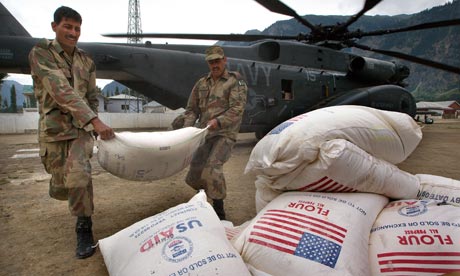 Lastly, President Obama should use his executive power to reform the way the federal government distributes food aid.  According to Oxfam, the current US food aid system loses at least $500 million annually from waste and inefficiency. Reforming this system could enable food aid to reach an additional 17 million food insecure people. Currently, federal law requires that the US government purchase 75% of its food aid domestically and ship it to recipients. Transportation costs eat 65% of the total budget. Pilot programs demonstrate that purchasing food from local producers can reduce costs by 54% and cut delivery time by 62%. These common-sense reforms would save lives, taxpayer money, and reduce food waste in a time of worsening food insecurity.

The agenda I have laid out is broad and complex; however, the threat that climate change and food security pose to the developing world is as well. If President Obama moves on these items, he will go a long way towards tackling the climate crisis.