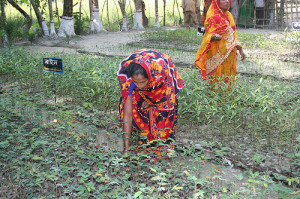 Women in Bangladesh attend to a mangrove nursery as part of the country’s climate change adaptation efforts (photo courtesy of UNEP).

Last week, there was a blog post at AlertNet titled “Climate Conversations – Is acceptance of climate change adaptation an admission that mitigation has failed?” The title caught my attention, and I read the piece with some dread; I thought we had already moved beyond this debate. Fortunately, the piece does not rehash this tired argument.

That said, the fact that climate activists still have to use raise this question is disheartening. I had thought that recent international actions hard largely shelved this line of thought. For instance, through the 2001 Marrakesh Accords, the UN Framework Convention on Climate Change (UNFCCC) noted the need to explore adaptation and created the Least Developed Countries Fund to support the development and implementation of adaptation plans. Subsequent UNFCCC actions supplemented this:

It is clear that the international commitment has made a commitment to adaptation (at least vocally). The otherwise highly disappointing Cophenagen Accord that emerged in 2009 included a commitment from developed countries to mobilize “USD 100 billion dollars a year by 2020 to address the needs of developing countries” (emphasis mine). It remains highly unclear where those funds will come from, and, to date, the developed countries have come nowhere close to meeting their pledge. Yet, the commitment is on paper, and it demonstrates that adaptation is here to stay.

Generally, climate researchers argue that we must “adapt to what we cannot mitigate, and mitigate what we cannot adapt to.” The international community has agreed that we should not go beyond 2°C warming. This is the point at which adaptation becomes exceedingly difficult, if not impossible. However, it has become increasingly clear in recent months that we are on the verge of blowing past this cutoff. The World Bank has argued we are on the path to a 4°C world, and PriceWaterhouseCoopers projects that our current emissions trajectory puts us on a path to 6° of warming. Even the normally conservative International Energy Agency notes that business as usual will exhaust the carbon budget for 450ppm by 2017.

British climate scientist Kevin Anderson has argued that the difference between 4°C & 6°C is essentially irrelevant; 4°C will likely quickly give way to 6°C due to a series of feedback mechanisms. As such, once we hit 4°C, it becomes “extremely unlikely that we wouldn’t have mass death,” as this level of warming “is incompatible with an organized global community.” (Listen to Anderson speak about this risk below).

One can see this suffering globally. The World Health Organization has estimated that, as early as 2004, climate change was already responsible for 140,000 premature deaths per year.  Last year, DARA International’s Climate Vulnerability Monitor increased this projection to roughly 400,000 climate-related deaths annually. The IPCC estimates that climate change will make an additional 132 million Asians malnourished and increase the number of people in Sub-Saharan Africa facing water stress by 350-600 million by 2050. 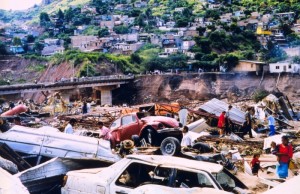 These estimates are based on current warming and/or mid-range projections (at or below 2°C). It’s abundantly clear that mitigation is essential for sustaining an inhabitable planet. Yet, the increasingly obvious effects of extreme weather, much of which is tied to climate change, also make it clear that we must adapt now. Climate-related disasters reduced the US’s GDP by 1% in 2012; the effects are significantly worse in developing countries. Hurricane Mitch, which struck Central America in 1998, “set back development in Nicaragua by 20 years.”

All of this information makes it clear that, for climate change, mitigation and adaptation are not an either/or proposition. We need both, and we need them now. It’s time to leave this mitigation vs. adaptation debate back in the 1990s, where it belongs.

2 thoughts on “Moving beyond the mitigation vs. adaptation debate”