Last week, an article came out in the journal Nature Climate Change (Climate Central also has a good summary of it) that discussed the likely effects of climate change on labor productivity. The authors examined the effects of heat stress during peak heat stress months in tropical and mid-latitude regions. 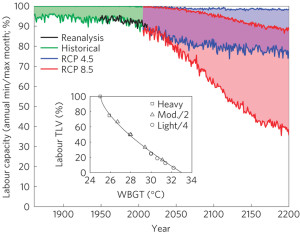 While these findings are new, they mirror earlier work on the effects of climate-related extreme temperatures on income and production. In their 2008 paper (PDF) “Climate Shocks and Economic Growth:Evidence from the Last Half Century,” Dell, Jones, and Olken studied temperature and precipitation data from 1950-2003 in order to determine the effects of extreme temperature and precipitation on a country’s economic performance.

Their results suggested that each 1◦C increase in average temperatures in any given year tends to reduce economic output by 1.1%; however, this effect only appeared in low-income countries. Using this historical relationship, they projected the long-term effects of global warming on economic output in poor countries, based on mid-range climate projections through the end of the century. In the key paragraph of paper (page 23), they note:

“With a 10-year adaptation horizon, the median growth rate among poor countries appears 0.6 percentage points lower through 2099 compared to the case of no warming. Extrapolated over 100 years, this implies that the median poor country’s income will be about 50% lower than it would be had there been no climate change.”

Economies in low-income countries are heavily dependent on natural resources, particularly agriculture, implying that workers in these areas are directly susceptible to direct effects of higher temperatures and changes in precipitation. The negative effects will stretch beyond just agriculture, however. Climate change will likely negatively effect forestry and fisheries, among other sectors. In the least developed countries (LDCs), revenues derived from natural resources account for 20.3% of GDP. The most developed countries – the 27 members of the OECD – derive just 1.5% of their GDP from resource rents.

Climate change will emerge as an environmental justice issue and will continue to threaten the fragile human and economic development of the world’s poor. Low-income states will suffer the most from climate change, despite the fact that they have done the least to contribute to it. LCDs emitted just 0.25 metric tons of CO2 annually from 2007-2009; high-income states, in contrast, accounted for 11.97 tons of CO2 emissions during this period – nearly 48 times higher.

Clearly, climate change will have major economic and development impacts. But its most serious, perverse impact will be moral.